Ukraine: six months have passed and Mykolaiv has become accustomed to war

In the queue to fill up with drinking water, in the misnamed district of Soukhiï Fontan ("Dry fountain" in Ukrainian), a dozen neighbors are talking, empty cans of 5 or 10 liters at arm's length . 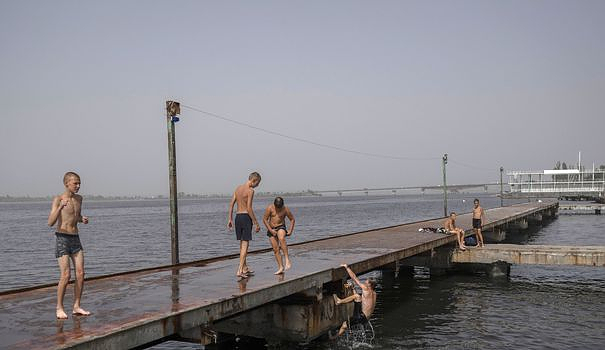 In the queue to fill up with drinking water, in the misnamed district of Soukhiï Fontan ("Dry fountain" in Ukrainian), a dozen neighbors are talking, empty cans of 5 or 10 liters at arm's length .

Since fighting knocked out a pipeline in April, tap water, after being cut off for a long time, has been salty and drinking water is only accessible from drinking fountains installed in each neighborhood.

But this is no longer what disturbs the population of Mykolaiv. "Recently, there was an explosion near my home. It's scary but what's terrible is that I've already taken the plunge," says Eva Goudzon, a 35-year-old photographer and singer.

She no longer sleeps at night waiting for the strikes. "It still disturbs my rhythm, when I have to take care of my two children during the day," she says.

Strategic port in the estuary of the Dnipro river (Dnieper in Russian), Mykolaiv was almost occupied at the beginning of the war, almost surrounded by Russian troops.

Its capture would have opened the road to Odessa to the Russians in the west, and surely changed the course of the war. At the cost of heavy losses, the Ukrainian army had thrown all its forces into battle to repel the enemy.

If the vice has loosened, the bombardments have never ceased. The deadliest, on March 29, hit the regional administration building and killed 37 people, including many municipal employees.

Economically, the city is asphyxiated. The port, one of the most important in Ukraine, is still subject to the Russian blockade and the shipyards are at a standstill.

The yacht club closed and teenagers took possession of the premises, ignoring the sign "No swimming".

But the center remains lively and the restaurants open, mostly frequented by soldiers on leave like Mykola, 33, from Kherson, the occupied city where his family lives.

"It's sad to say but people have started to get used to it, they try to continue living the same way," says the soldier.

"Getting used to the bombardments is dangerous. We have to continue going down to the shelters", worries Valentyn Raïlan, a Red Cross volunteer who during the day supervises the distribution of water during the day and in the evening repairs the roof of his mother's house, damaged by a knock.

Regularly, the air alert sirens resound in Mykolaiv, which had almost 500,000 inhabitants before the war. But no passerby looks up.

Dull explosions in the distance remind us that the front line is only about twenty kilometers away. But it is especially at night that the city is hit: brief bombardments, at a fixed time, which can strike anywhere.

In July, two universities were affected. Then, on August 1, a medical center and a warehouse where 100 tons of food burned, according to Governor Vitali Kim.

Petro Moguyla University of the Black Sea, the most famous in the city, was targeted twice on August 17 and 19, but that did not prevent the rector from announcing that the start of the school year would take place as planned in September.

It was also one of these nocturnal strikes, on July 31, which killed cereal magnate Oleksiï Vadatoursky and his wife in his home.

Andriï, a 40-year-old unemployed dock worker who only wishes to give his first name, will never get used to it. On April 4, her father was killed in the street along with 11 other people.

The NGO Médecins sans Frontières (MSF), whose team was by chance present on the spot that day, said it had found "elements that could suggest the use of cluster bombs".

"It's really difficult. You may have seen movies or documentaries but when the sound of an explosion is heard, you hear the sirens or the falling of a roof, it's something else, it's scary" , confides Andriï in a muffled voice.

"People are suffering, the city is suffering and Ukraine is suffering. No one expected this. But we are holding up."