Vladimir Putin and Recep Tayyip Erdogan met in Kazakhstan, but remained silent about the possibility of Turkish mediation on Ukraine, which the Kremlin said it was waiting for. 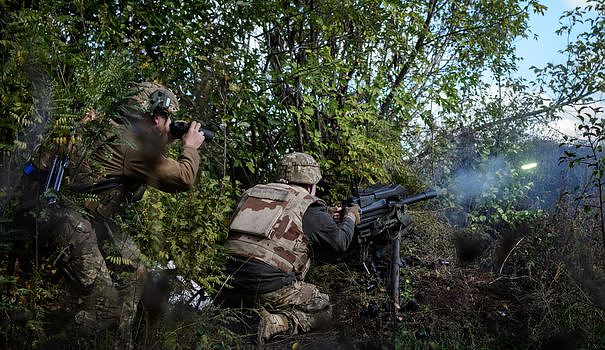 Vladimir Putin and Recep Tayyip Erdogan met in Kazakhstan, but remained silent about the possibility of Turkish mediation on Ukraine, which the Kremlin said it was waiting for. The Russian president mainly communicated on his proposal to his Turkish counterpart to create a "gas hub" in Turkey to export gas to Europe.

Sign of the Russian retreat on several fronts since the beginning of September, the pro-Russian occupation authorities of Kherson have asked Moscow to evacuate civilians from the area. It is one of the four regions which the Kremlin claimed for annexation at the end of September. "Take your children and go," said the head of the regional occupation administration, Vladimir Saldo.

After massive Russian bombardments across Ukraine on Monday and Tuesday hit the country's energy infrastructure, Ukrainian operator Ukrenergo announced on Thursday that it had "stabilized the energy supply in all regions of Ukraine" and not need to ration electricity.

Many Ukrainian cities and regions had faced power cuts in recent days.

The Ukrainian government had to call on the population to limit their electricity consumption after these bursts carried out in response to the explosion which damaged the Russian bridge in Crimea, a symbolic and strategic target linking the peninsula annexed by Moscow to Russia, and that the Kremlin blamed it on Ukraine.

On the diplomatic front, the Russian and Turkish presidents met Thursday in Kazakhstan for a meeting on the sidelines of a regional summit in Astana.

If the Kremlin had raised the possibility of an "official proposal" from Turkey to mediate between Moscow and kyiv, the two men did not publicly raise this issue.

They talked about the economy, Mr. Putin therefore proposing to Mr. Erdogan the creation of a "gas hub" in Turkey to export Russian hydrocarbons to Europe, while the war in Ukraine has led to a considerable drop in gas deliveries to European states.

Ukraine continues for its part to reap promises of deliveries of anti-aircraft systems to neutralize the threat of Russian missiles, which on Monday struck both electrical installations and homes or a playground.

After the announcement of the arrival of a German system and the upcoming delivery of American models, the United Kingdom announced on Thursday that it would provide ammunition capable of shooting down cruise missiles.

France has set up a fund endowed with 100 million for the purchase of French armaments by Ukraine and has confirmed the upcoming shipment of six Caesar guns, bringing the endowment to 24.

- At the gates of Bakhmout -

The Russian forces, retreating on several fronts, remain on the offensive on that of Bakhmout, a city in the East which had 70,000 inhabitants before the war and today largely deserted and ravaged by artillery fire.

Pro-Russian forces in the area claimed to have taken two villages, Opytné and Ivangrad, on the southern edge. The Ukrainian general staff told him that they had repelled the Russian attacks in the region.

Ukrainian soldiers met on Wednesday not far from this section of the front indicated that the Russian artillery was in a strong position there.

Further north, in Iampil, near the strategic Lyman railway hub recently reconquered by Ukraine, AFP journalists heard heavy artillery fire on Thursday. According to a soldier returning from the front, the village of Torske was under Russian bombardment there.

In Belgorod, Russia, a Ukrainian missile hit, without causing any casualties, a residential building in this large city located in a border region of Ukraine, local authorities reported, while the shots hitting Russian territory have multiplied in recent weeks.

The head of the International Atomic Energy Agency (IAEA) Rafael Grossi, back in Ukraine on Thursday, intends to negotiate a formula capable of securing the Zaporizhia nuclear power plant, occupied and annexed by the Russians and regularly targeted by shootings which cause power outages.

With his army in difficulty, the Russian president tried to regain the initiative at the end of September by mobilizing hundreds of thousands of reservists to reinforce his lines and decreed the annexation of four regions in the East and South.

Russian regional authorities have acknowledged that the first mobilized reservists from the Chelyabinsk region in Western Siberia were dead, without specifying whether they died at the front or in the bases where training is organized.