Ukraine reaps pledges of support for 90th anniversary of Holodomor

Ukrainian President Volodymyr Zelensky has assured that his people will hold their ground in the face of Russian attacks, which regularly cause massive power and water cuts as winter temperatures set in. 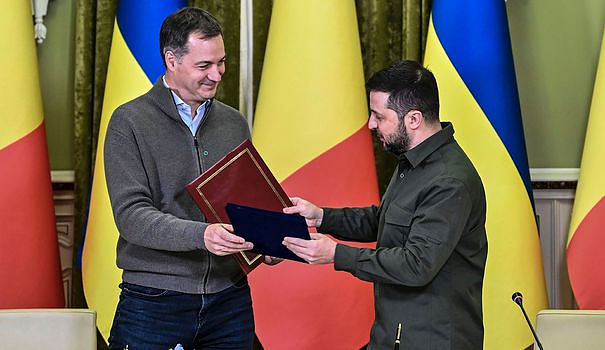 Ukrainian President Volodymyr Zelensky has assured that his people will hold their ground in the face of Russian attacks, which regularly cause massive power and water cuts as winter temperatures set in.

“Ukrainians have been through really terrible things. And despite everything, they have retained the ability not to submit and their love of freedom. Once they wanted to destroy us with hunger, today with darkness and darkness. cold," Zelensky said in a video posted on Telegram.

Several European leaders made the trip to kyiv on Saturday for the commemorations of the Holodomor, which Ukraine considers a "genocide".

The three leaders issued a joint statement after the meeting emphasizing their continued support for Ukraine and denouncing Russia's actions.

- "Alongside the Ukrainian people" -

Belgian Prime Minister Alexander De Croo also paid a visit to kyiv, his first since the start of the Russian invasion.

According to the Belga agency, it provides additional financial support of 37.4 million euros for Ukraine, in particular to help the population cope with winter in a context of power cuts.

"Arrived in Kyiv. After the heavy shelling of the past few days, we stand with the Ukrainian people. More than ever before," he said on Twitter.

French President Emmanuel Macron has also promised an additional 6 million euros for these exports, which are vital for the supply of many countries in Africa and Asia.

"We have chosen to act in solidarity with the most vulnerable countries. Russia, for its part, continues to exploit hunger as a means of pressure and food as a weapon of war", he indicated in a message.

The German Parliament took the decision on Friday to define as "genocide" the Holodomor, which caused the death of several million Ukrainians in 1932 and 1933 against a backdrop of land collectivization.

- "The story repeats itself" -

Russia rejects this classification, arguing that the great famine that raged in the USSR in the early 1930s claimed not only Ukrainian victims, but also Russians, Kazakhs, and among other peoples.

At the Holodomor Memorial Center in central kyiv, a dozen Orthodox priests dressed in black and silver robes gathered on Saturday for a religious ceremony honoring the victims of the famine.

“It was an artificially created genocidal famine... Now that we are living through this massive war launched without provocation by Russia against Ukraine, we see history repeating itself,” Pope Oleksandre Chmurgin told AFP. 38 years old.

Among those gathered to commemorate the victims of the famine, lawyer Andriï Savtchouk, 39, spoke of an "irreparable" loss for Ukraine.

"Stalin's system, the repressive state wanted to destroy Ukraine as a nation. Today we see that Stalin's efforts are being continued by (President Vladimir) Putin," he said.

On the front, prisoner exchanges between Russia and Ukraine continued on Saturday with 12 people released on the kyiv side. Moscow, for its part, announced that it had recovered nine of its men.

In Dnipro, in central Ukraine, a Russian bombardment left at least 13 injured, according to regional governor Valentin Reznitchenko.

In the capital, where part of the population has spent the last three days without electricity after massive Russian strikes on Wednesday, the municipality has announced that it has restored 75% of the power supply and 90% of the heating, as temperatures approach zero degrees Celsius.