Ukraine: Putin orders the displacement of populations under pressure from the kyiv army

kyiv denounces for its part a policy of "forced displacement", and calls the international community to witness. 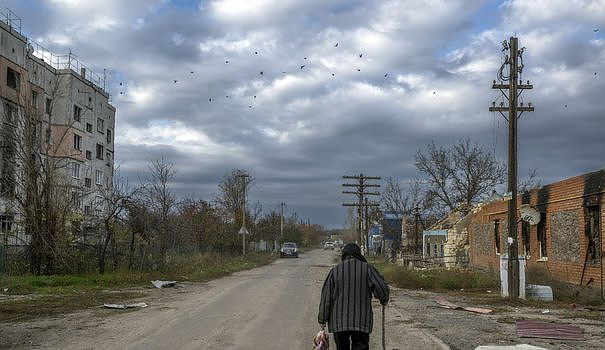 kyiv denounces for its part a policy of "forced displacement", and calls the international community to witness.

This multiplied the initiatives on the same day to try to force Moscow to change its offensive, from the German Chancellor Olaf Scholz who asked Beijing to use its influence on the Kremlin, to the G7 meeting in Münster which reiterated its support unfailing in kyiv.

The Russian president, on Red Square for the National Unity Day, for his part did not deviate in his speech about Ukraine and Western allies.

"By continuously supplying arms to Ukraine, by sending mercenaries there, (the Westerners) are showing absolutely no mercy for the (Ukrainian) citizens. At their expense, they are furthering their geopolitical objectives, which have nothing to do with the interests of the Ukrainian people," he said.

According to the Russian president, these efforts "are also aimed at weakening, disintegrating, destroying Russia".

Concerning the evacuation of the inhabitants of Kherson, under the pressure of Ukrainian advances, he operated a semantic shift, from voluntary evacuation to forced displacement.

"Those currently living in Kherson must be removed from the most dangerous combat zones," he stressed.

kyiv denounces for its part a policy of "deportation" of the Ukrainian populations towards the east of its territory under Russian control, even towards Russia itself.

“The Russian occupation administration has started forced mass displacements of inhabitants” of the Kherson region, thus denounced Friday evening the Ukrainian Foreign Ministry, affirming that “similar displacements are also carried out by Russia in Zaporizhia, Lugansk and Donetsk regions, as well as in the Crimea".

The Russian occupation authorities also assured Friday that no curfew will be put in place in Kherson, a few minutes after announcing one.

"A curfew has been decreed in the city of Kherson, which will last 24 hours a day, so that we can defend our city," the deputy head of the Russian occupation authority in Kherson initially said on Telegram. , Kirill Stremoussov.

He then deleted his initial video a few minutes later, replacing it with a similar video where it was no longer a question of this curfew, without explanations, before publishing a new video assuring that "there was no restriction for residents" in Kherson.

Last week, the Russian occupation forces said that 70,000 residents of Kherson and the region had been transferred to the left bank of the Dnieper River, where Moscow has better control of the situation.

But the Russian Ministry of Defense announced on Telegram on Friday that these population transfers were continuing at the rate of “more than 5,000” people per day.

However, in a village in the region, Arkhangelské, recently liberated by Ukrainian troops and still bearing the marks of violent fighting - bloody Russian uniforms in the streets, destruction and the smell of corpses emanating from certain buildings - a resident recounted having welcomed the Ukrainian soldiers as heroes.

"The soldiers hugged me so tightly that I felt like they were my children," Tamara Propokiv, 59, said with tears in her eyes.

Anatoliï Maïstrenko and Antonina Voïtsechko, a couple of inhabitants, he a "tractor", she a nurse, reconverted into smugglers during the Russian occupation, recounted having helped more than 2,000 civilians to illegally reach the territory under Ukrainian control, by making them cross under the bombs the river Ingoulets in their pneumatic cannot.

To stem the Ukrainian dynamic on the ground, Vladimir Putin boasted in Red Square of having even exceeded the objectives for mobilizing reservists.

"We already have 318,000 (mobilised). Why 318,000? Because volunteers continue to arrive. The number of volunteers is not decreasing", welcomed the Russian president, whose Minister of Defense, Sergei Shoigu, had given on October 28 the figure of 300,000 mobilized.

Relatives of Russian soldiers, however, told AFP the "chaos" of the mobilization decreed by Vladimir Putin on September 21 after a debacle of his army in northeastern Ukraine.

"All we're shown on TV is flan. It feels like the decision to mobilize was made abruptly and no one was ready," said Tatiana, a woman whose nephew was mobilized in early October in Krasnogorsk, a northwestern suburb of Moscow. She prefers to conceal her family name for fear of reprisals, in a country where those who criticize the army risk prison.

Thousands of Russian men have also fled the country for fear of being mobilized.

"Traitors, cowards, and greedy defectors," commented Friday Dmitry Medvedev, once considered a "liberal" president between two terms of Vladimir Putin, and today among the most violent hawks within the Russian leadership.

On the diplomatic front, Ukraine's Western supporters have stepped up their efforts to try to stem the military escalation, following new massive cruise missile strikes on kyiv and other cities in the country this week.

Visiting Beijing, German Chancellor Olaf Scholtz asked President Xi to use "his influence" on Russia so that it ends its "war of aggression" against Ukraine.

Germany and China have also jointly announced their opposition to any idea of ​​a nuclear strike, while Moscow has repeatedly mentioned this threat.

The G7 countries, meeting on Friday at ministerial level in Münster, western Germany, joined in this warning, denouncing in their final communiqué the "unacceptable nuclear rhetoric of Russia".

"We reiterate our unwavering commitment to continue to provide the financial, humanitarian, political, technical and defense support that Ukraine needs to alleviate the suffering of its people and defend its sovereignty and territorial integrity within its internationally recognized borders." , they added.

"We are going to help them bring this conflict to a successful conclusion, for as long as it takes," said British Foreign Minister James Cleverly.

"The most important thing that I have come to say (...) is that the United States will support Ukraine for as long as this fight requires", also declared the national security adviser of the House Blanche Jake Sullivan, visiting kyiv.

The G7 also agreed to set up "a coordination mechanism" to help Ukraine repair and defend its essential electricity and water supply infrastructure, pounded in recent weeks by Russia.