Fighting raged Tuesday, November 22 between Ukrainians and Russians on the tip of Kibourne, a piece of land nestled at the tip of the left bank of the Dnieper. 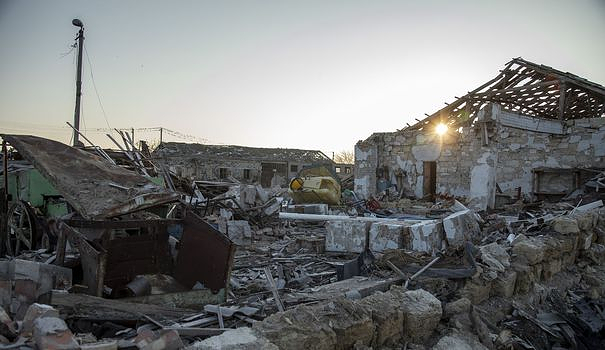 Fighting raged Tuesday, November 22 between Ukrainians and Russians on the tip of Kibourne, a piece of land nestled at the tip of the left bank of the Dnieper. This area south of the city of Mikolaiv in southern Ukraine appeared to be the next battleground after the Russians were driven out of Kherson (a little further south) on 11 November.

"We have three localities left (to be taken over) on the Kinbourne peninsula" before completely liberating the region of Mikolaiv (south), the regional governor said on Tuesday. On Monday, the spokeswoman for the Southern Command of the Ukrainian army, Natalia Goumeniouk, had indicated that "a military operation is underway on the Kinbournska peninsula".

The capture by the Ukrainian army of the last three villages in the Mikolaiv region from the hands of the Russians would mark an important victory for kyiv. Russia had conquered this area in the early days of its invasion of Ukraine in late February.

The Russian giant Gazprom threatened Tuesday to reduce its gas deliveries to Moldova, accusing Ukraine of siphoning off the gas pipeline which passes through its territory. "The volume of gas supplied by Gazprom at the Sudja crossing point for transiting to Moldova via the territory of Ukraine (in reality) exceeds the volume" that reaches the border between Ukraine and Moldova, lamented the gas giant, owned by the Russian state. According to Gazprom, Ukraine illegally stockpiled 52.5 million cubic meters of gas in November by "raping" part of the deliveries to use for its own purposes. An assertion denied by the Ukrainian gas operator.

The Russian giant thus threatened to "reduce the gas supply at the Soudja crossing point (...) from November 28 at 10:00 a.m.", if kyiv continued to siphon gas to other countries. This threat comes as temperatures have dropped in recent days in Europe, increasing the demand for gas to be able to heat in particular.

For its part, the Ukrainian gas operator (GTSOU) said in a statement that "all gas volumes" arriving from Russia to Chisinau had "been transferred in their entirety" to the two crossing points entering Moldova. "This is not the first time that Russia has used gas as an instrument of political pressure," lamented Olga Bielkova, director of government and international affairs at GTSOU.

Russia was the EU's biggest gas supplier before Moscow's military intervention in Ukraine in February, but the EU27 have since greatly reduced their imports, to less than 10% of all gas imported, according to Brussels. Moldova, a small country of 2.6 million inhabitants neighboring Ukraine, is bearing the brunt of the consequences of the conflict in Ukraine, particularly in terms of energy, while Gazprom has already halved its gas exports to Chisinau .

Explosions killed three people in the Russian region of Belgorod, bordering Ukraine, the governor of this territory regularly hit by gunfire and where fortifications are under construction announced on Telegram on Tuesday. He claimed a woman died after suffering head trauma during a bombing in Chebekino, a town eight kilometers from Ukraine. He also said that two other people were killed in the explosion of "an unidentified type of ammunition" in the village of Starosselié, bordering Ukraine and where the state of emergency has been in effect since. October 27.

Localities and infrastructures in the region very frequently suffer from fire, often fatal, attributed by Moscow to the Ukrainian army. The regional capital, also named Belgorod, has been directly hit several times. So much so that the governor indicated on Monday that a line of fortifications was under construction at the border, without specifying the length or its location. He nevertheless published photos showing him inspecting this construction site. We see a crane installing cement anti-tank pyramids along a road and an excavator digging a ravine.

Last week, Russia also announced fortification works in the annexed Crimean peninsula. The leader of the Russian paramilitary group Wagner, Yevgeny Prigojine, has ordered the construction of fortifications in the Russian regions of Belgorod and Kursk, as well as in the Lugansk region occupied by Moscow in eastern Ukraine.

Ukrainian investigators said Tuesday, November 22 to have arrested for "treason" a Ukrainian official of Russian remand centers in Kherson (south), a city liberated on November 11 after more than eight months of occupation by troops from Moscow. "From the first days of the occupation of Kherson, this employee of a detention center worked for the invaders ... as a manager of remand centers and places of execution of sentences," he said. said the Ukrainian State Bureau of Investigation (SBI) in a statement. According to the SBI, this employee "enabled the escape of criminals imprisoned just before the liberation of Kherson."

On November 14, the Ukrainian security services (SBU), for their part, said they had arrested a Russian soldier in Kherson "disguised as civilians", while fears that Moscow collaborators are still present incognito in the city remain strong. .

Russia inaugurated a new nuclear-powered icebreaker on Tuesday, November 22, which should facilitate its hydrocarbon exports to Asia via the Arctic, at a time when Moscow is reorienting its energy strategy due to Western sanctions against its offensive in Ukraine. . "The development of (northern sea routes) will allow Russia to fully realize its export potential and establish an efficient logistics route, including to Southeast Asia," Russian President Vladimir Putin said. in a speech broadcast by videoconference during the commissioning ceremony in Saint Petersburg.

This new nuclear-powered ship, more than 170 meters long, can break ice up to three meters deep. It is the third copy in a series launched by the atomic energy giant Rosatom. Named "Ural" in tribute to the Russian region of the Urals (central west), it can carry up to 54 crew members, according to Rosatom.

READ ALSO> Russia: the "Ural", the nuclear icebreaker which must ensure Moscow's supremacy in the Arctic

Its deployment from December should make it possible to ensure Russian supremacy in the Arctic, a strategy assumed by Vladimir Putin, while Moscow is confronted with the ambitions of other powers. While the European Union has decided on a gradual embargo on its imports of Russian oil and has greatly reduced those of gas to protest against the Russian attack in Ukraine, the first gas exporter in the world and number two oil then wants to concentrate its hydrocarbon deliveries to Asia.