Ukraine: near the southern front, a bicycle nursery to wait for the return of peace

Some machines were pampered: a sweater protects a saddle, a small bag is attached to a frame. 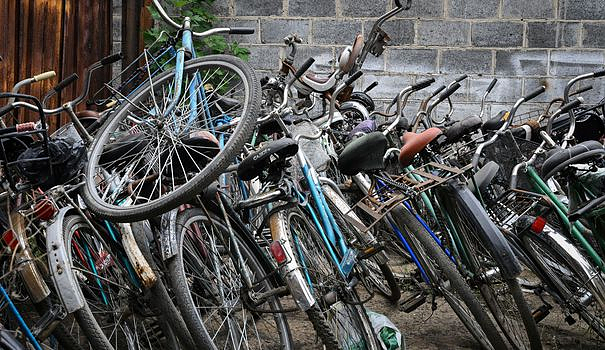 Some machines were pampered: a sweater protects a saddle, a small bag is attached to a frame. Others look more like work tools, rusty, hard to hurt.

Luggage racks are sometimes equipped with a baby seat, sometimes with a crate. There is also a heavy scooter for disabled people, a few pushchairs, wheelchairs, carts and a small brown bike with wheels.

More than 600 cycles wait in and around a small warehouse in Zelenodolsk. "We keep them for their owners", so that they can recover them at the end of the war, affirms Vitaliï Rekhlitskiï, who works for the municipality.

Many of them arrived in early March, as the Russian army gradually took control of part of the neighboring Kherson region. By then, the invader had already stolen most of the cars in the surrounding villages, says Mr. Rekhlitsky. To leave, there was only the bike.

"People fled, sometimes with nothing at all, sometimes with a bag," he recalls. They pedaled to their freedom on ageless frames, whose lack of brakes on the handlebars indicates that they date from the Soviet era.

"For the elderly, (to be deprived of these bikes) is a huge loss," sighs Dmitro Kostenko, their caretaker.

Since a few weeks since Ukraine has launched a counter-offensive in the South, recapturing some villages, new rounds have also been brought back by the Ukrainian army.

A sign that things may be changing for the better, around fifty owners have returned to recover their property. Every time one of them shows up, "I have tears in my eyes", smiles the guard, while artillery fire echoes almost without interruption in the distance.

With the counter-offensive, "the bombardments have intensified. There is more bang", observes this sixty-something man walking on crutches.

Barely fifteen kilometers from the southern front, Zelenodolsk, which means "green valley" in Ukrainian and Russian, is a small town of 13,000 inhabitants built in the 1960s under the Soviet Union.

On the rich agricultural land from which it takes its name, a thermal power plant has been built, whose high chimneys are visible from part of the town, as well as dozens of low and uniform buildings for its employees.

There is also a small hospital, heavily used Thursday morning when the Russian army targeted the plant, injuring 19 people, according to Valentyn Reznichenko, the governor of the Dnipro region, of which Zelenodolsk is a part.

"People were just going to work when the Russians fired their Hurricane (missiles) at them," he said.

None of the victims, though hit by shrapnel from the projectile, was too seriously injured, said Svitlana Kravtchouk, who provided them with first aid.

In a regularly bombed city, where a 9-year-old child was killed in early September, many suffer from "chronic stress", continues the doctor. By dint of nights spent in corridors or cellars, many inhabitants "have forgotten what it is to sleep in a bed".

Since the start of the Ukrainian counter-offensive, with so far mixed successes, the director of the hospital Olena Yaroshenko has confided that she is more "reassured" because "we hear ours shooting more".

In her orchard on the edge of town, where a pear tree bends under the fruit and a few strawberries still grow, Evgenia Vasilieva, 84, however mourns the lost calm.

Arrived in 1964 in Zelenodolsk, three years after the founding of the city which she saw being built, she was married to a Russian and often went to Russia, where "all kinds of good people live", she says. . But at their head is now Vladimir Putin, the "antichrist" bearer of the "apocalypse", which frightens this believer.

Near his Garden of Eden, which allows you to imagine what the "green valley" was like before the construction of Zelenodolsk, a small house recently lost its roof, mowed down by a shell.