At the same time, Moscow continues to carry out a partial mobilization of its reservists in order to recruit nearly 300,000 fighters for its invasion of Ukraine, seeking parade in the counter-offensive of the Ukrainian troops who, armed with Western arms deliveries, resumed thousands of square kilometers of territory in early September. 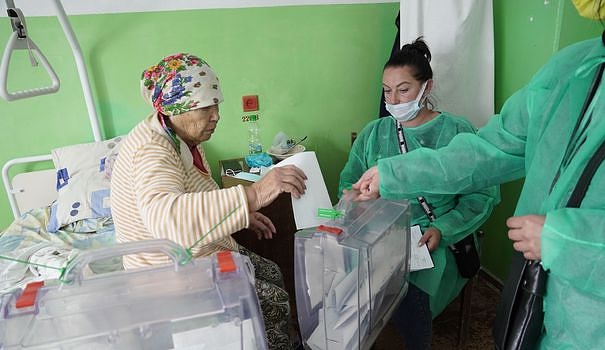 At the same time, Moscow continues to carry out a partial mobilization of its reservists in order to recruit nearly 300,000 fighters for its invasion of Ukraine, seeking parade in the counter-offensive of the Ukrainian troops who, armed with Western arms deliveries, resumed thousands of square kilometers of territory in early September.

Held since Friday in the separatist regions of Donetsk and Lugansk (east) and those under Russian occupation of Kherson and Zaporijjia (south), these polls have been denounced as "simulacra" by Ukraine and its allies.

G7 nations have vowed to 'never recognise' their results, while Washington has promised a 'swift and severe' response through additional economic sanctions to these annexations, which follow the pattern of that of Crimea in March 2014 .

China, Moscow's closest partner, without going so far as to denounce the elections, also called for respecting "the territorial integrity of all countries".

These criticisms and threats did not stop Moscow, which last week urgently organized these elections against the backdrop of Ukrainian military successes, opening hundreds of polling stations in the four territories and in Russia to allow the displaced to vote.

The authorities assured that "provisional results" should be announced no earlier than Tuesday evening or in the days that follow. The Russian Parliament will then have to vote on a text formalizing the integration of the four regions into Russia.

These polls were announced after a Ukrainian counter-offensive which enabled kyiv to regain control of most of the Kharkiv region in the north-east of the country.

After the withdrawal of Russian forces from these areas, the Ukrainian authorities announced an increase in gruesome discoveries, including a mass burial site of more than 400 graves in a forest near the key town of Izium.

On Monday, investigators were preparing to examine another alleged mass grave in an abandoned industrial farm near the small town of Kozatcha Lopan, close to the Russian border, where the bodies of Russian and Ukrainian soldiers killed in the fighting could lie.

On the ground, Russian attacks on Iranian drones have intensified in recent days, particularly above Odessa, a major port on the Black Sea, where two "kamikaze" machines hit military infrastructure on Monday, causing a major fire and ammunition detonations, according to the Ukrainian military command.

On Monday, the kyiv army said it had observed Russian bombardments in more than 40 localities and repelled attacks in a dozen directions, including Soledar and Bakhmout in the east.

Moscow, for its part, continued to claim to inflict heavy losses on its adversary.

If the Russian referendums in Ukraine were to result in the incorporation of these territories into Russia -- which there is little doubt -- it would constitute an escalation of the conflict, especially since President Vladimir Putin has raised the threat of nuclear strikes to defend what it considers to be its territory.

In Russia itself, the announcement of the mobilization by Mr. Putin prompted many Russians to leave the country, causing an influx at the borders, without it being possible to quantify the extent of the phenomenon.