"We must be aware that tomorrow (Wednesday) repulsive Russian provocations and brutal strikes are possible," Volodymyr Zelensky warned Tuesday evening. 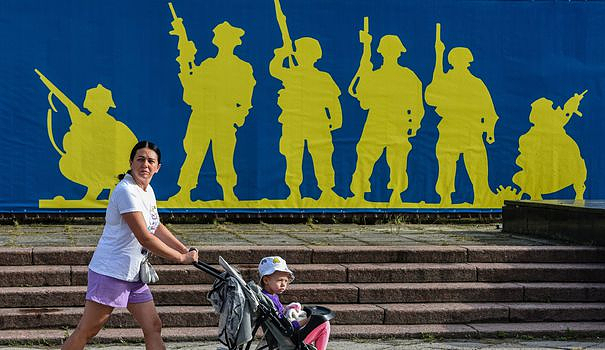 "We must be aware that tomorrow (Wednesday) repulsive Russian provocations and brutal strikes are possible," Volodymyr Zelensky warned Tuesday evening.

"And we will of course respond to any manifestation of Russian terrorism," added the Ukrainian president, who had already argued last Saturday that "Russia could strive to do something particularly disgusting, particularly cruel".

In the early hours of August 24, explosions sounded in several cities, such as Kharkiv (north-east), Zaporijjia and Dnipro (center), according to local authorities.

On Tuesday morning, the United States Embassy in kyiv also broadcast an alarmist message warning that Russia could bomb Ukraine even more “in the coming days” and recommended that American citizens leave the country “immediately”.

Since the withdrawal of Russian forces from the vicinity of the Ukrainian capital at the end of March, the bulk of the fighting has been concentrated in the east, where Moscow slowly gained ground before the front froze, and in the south, where the Ukrainian troops say they are carrying out a counter-offensive, which is also very slow. However, Russia continues to regularly target Ukrainian cities with long-range missiles, even though kyiv and its surroundings are rarely hit.

Ukraine celebrates its independence from the USSR in 1991 on August 24, a date also marking a semester of war, which left tens of thousands dead and caused immense destruction in this country.

In this macabre context, "to celebrate" is not really the right verb, especially since many inhabitants will be confined: the authorities of kyiv have banned all public gatherings from Monday to Thursday in the capital, and the governor of the Kharkiv region (center-east) for its part ordered a curfew from Tuesday evening to Thursday morning.

"In six months, the peaceful life was shattered in each family," said Nina Mikhailovna, an 80-year-old pensioner, met on Independence Square in the heart of kyiv. “How much destruction, how many deaths, what is that?” she wondered.

It is on this highly symbolic date that the United States will announce new military aid of approximately $3 billion to Ukraine, according to an American official.

This will be the largest package of American military aid since the beginning of the war, which will allow kyiv to acquire new weapons or finance training or operations. The money comes from a Pentagon fund which can be used for immediate operations or for the acquisition of armaments.

This envelope is different from another fund that allows President Joe Biden to order the immediate transfer to Ukraine of arms, material and equipment from existing stocks.

Last Friday, the Pentagon announced a tranche of military aid to Ukraine from this fund, amounting to $775 million. This new tranche of aid included additional missiles for US Himars precision artillery systems, which have "changed the game on the battlefield", said a senior US Department of Defense official.

On Tuesday, the Europeans reaffirmed their support for kyiv during the summit of the "Crimean platform", which brings together the main allies of Ukraine and which already existed before the invasion of February 24.

French President Emmanuel Macron urged the international community to show "no weakness, no spirit of compromise" in the face of Russia. The Europeans are ready to support Ukraine's "fight" "for the long term", he added to the attention of Volodymyr Zelensky.

"We will never recognize any attempt to change the status of any part of Ukraine whatsoever," insisted German Chancellor Olaf Scholz, whose country will deliver new weapons to kyiv for around 500 million euros.

"We must continue to provide Ukraine with all necessary assistance (economic, military, etc.) until Russia ends this war and withdraws its troops from all over Ukraine," added the Prime Minister. British Minister Boris Johnson.

Russian President Vladimir Putin is counting on the "reluctance" of Europeans to bear the consequences of the war and the unity of the Member States must be "maintained from day to day", underlined in this context the head of diplomacy of the EU, Josep Borrell, during an interview with AFP.

As for tensions around the Zaporizhia nuclear power plant in central Ukraine, Russia and Ukraine once again accused each other at a Security Council meeting on Tuesday of endangering it, while the UN General Secretariat called on them to cease all military activity around the site.

Russian Ambassador Vassily Nebenzia castigated Westerners who "live in a parallel reality in which the Russian army itself bombs the site it protects". "No one can imagine that Ukraine would target a nuclear power plant creating a huge risk of nuclear disaster on its own territory," replied Ukrainian Ambassador Sergiy Kyslytsya.

At the request of Washington, Paris and London in particular, another meeting of the Security Council is scheduled for Wednesday morning to mark the six months of the invasion of Ukraine by Russia.

French Foreign Minister Catherine Colonna discussed with her Russian counterpart Sergei Lavrov an inspection by the International Atomic Energy Agency (IAEA) of the site of the nuclear power plant.

This visit, intended to "reduce the risk of a serious nuclear accident in Europe", could take place "within a few days if the current negotiations are successful", hoped the Director General of the IAEA, Rafael Grossi, pointing out "additional damage in the area" after the bombardments of the last few days.