Ukraine: in Kherson, star soldiers and a taste for freedom

On the central Svoboda square, the Ukrainian flag flies on the roof of the imposing regional administration building. 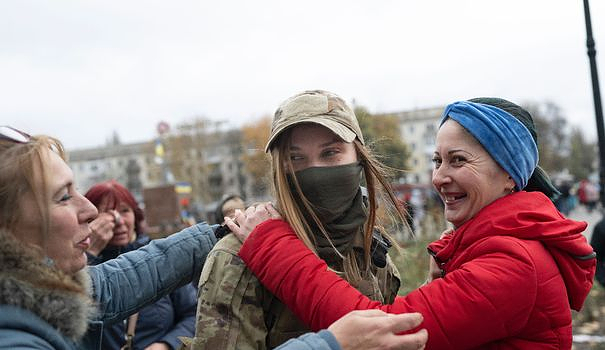 On the central Svoboda square, the Ukrainian flag flies on the roof of the imposing regional administration building.

Several hundred inhabitants are gathered there, in a joyful and good-natured atmosphere. We meet families with children, teenagers, young couples, the elderly.

Lyubov, 17, a theater student, has just arrived. Strokes of blue and yellow paint across her face, she wears a flag on her shoulders like a shawl. "I'm so happy that I can't express my emotions," she told AFP.

"I couldn't believe that finally we were released so quickly. It's such a relief", continues the young woman, dressed in a traditional Ukrainian dress.

What did he miss the most during these months of occupation? "Freedom", she replies spontaneously, almost shouting.

"When the Russians were here, we felt uncomfortable. We couldn't leave the city. We couldn't go shopping freely. Because I was afraid that someone might attack me," says she.

On the square, there are some Ukrainian soldiers. They come for a walk, to shop for food, alone or in twos or threes, tightly strapped into their impeccable camouflage fatigues, their silhouettes sharpened.

As soon as they disembark, women and men come to kiss them, young teenagers hug them respectfully, impressed children make them sign autographs on flags or balloons.

Available, the soldiers lend themselves to the game.

Like this blonde soldier, half of her face hidden under a neckerchief, who puts her signature on flags.

"I have feelings that I am not used to... We are grateful to the people of Kherson who waited for our arrival. We are very grateful for that," she told AFP.

"We are doing our job, we are not heroes," said another soldier.

In the street in front of the square, cars adorned with blue and yellow flags pass, honking their horns. Whistles and "houuuu" spout out as a Russian rocket launcher marked with the white V sign, towed by a Ukrainian military vehicle, passes.

Many came to benefit from a wifi connection made available via the Starlink satellite internet service, owned by Elon Musk, the boss of Tesla and Twitter.

Oleksandre Murzak, 62, and Valentina Murzak, 59, have just finished talking on the phone with their daughter.

A little further, Andrïi, 33, a philosophy student, absolutely wants to express himself.

"But I didn't expect it to happen so quickly and so easily. Without street fights, without those fights like in Mariupol. So I'm happy about that. That our city won't be as destroyed as other cities , fortunately,” he added.

Some denounce the behavior of Russian soldiers during the occupation of the city.

"They looted all the apartments, they destroyed the doors, they lived in the apartments. They took all the electronic equipment. They are thieves", gets angry Svetlana Vilna, 47 years old.

She says she "felt like being in prison for nine months".

Oleg Nazarenko, 25, explains that "the young people were stopped and searched. They terrified us. They were worse than the fascists. It was like that".

At the western entrance to the city, where Russian soldiers held a checkpoint, young people are repainting the concrete blocks that served as shelters for the occupying soldiers in yellow and blue.

About twenty inhabitants, including many teenagers and children, are gathered on the side of the road. They wave Ukrainian flags and make the V sign for victory as cars pass.

Two small fires of dead leaves and rubbish give off white smoke.

"We want to clean everything up as quickly as possible so that nothing reminds us of these beasts", gets carried away by Sergïi Zatirko, 65, who lives in a nearby building.

"We cleaned it all up. Them motherfuckers shit all over the place. Look at all the trash they left here. There's never been so much litter. It's just pigs."