Russia and Ukraine again accused each other on Sunday of having bombed this nuclear power plant located in southern Ukraine and militarily occupied by the Russian army. 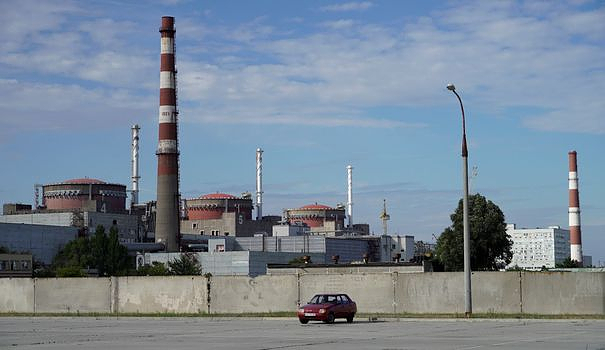 Russia and Ukraine again accused each other on Sunday of having bombed this nuclear power plant located in southern Ukraine and militarily occupied by the Russian army.

kyiv also denied having executed several Russian soldiers who had gone there.

"Explosions have taken place on the site of this major nuclear power plant, which is completely unacceptable," said Rafael Grossi, in an interview with the French channel BFMTV.

"Whoever it is, this needs to stop immediately," urged the IAEA chief, insisting, "People doing this know where they're hitting. It's absolutely deliberate, targeted."

"A good dozen" strikes targeted the plant this weekend, from Saturday to Sunday, some of which were noted by IAEA experts, the agency said in a statement.

Its manager judged the situation "extremely serious", without attributing responsibility to the Russian or Ukrainian forces.

"The plant is on the front line, there are military activities that are very difficult to identify, there are Russian personnel and Ukrainian personnel in operation," said Mr. Grossi.

For the Russian Ministry of Defence, "the kyiv regime does not cease provocations in order to create the threat of a disaster at the Zaporizhia nuclear power plant".

On Saturday and Sunday, Ukrainian forces fired more than 20 "large caliber shells" at the plant, the ministry statement said.

These notably exploded between energy blocks number 4 and 5 and targeted the roof of a "special building" located near these blocks, according to the same source.

Despite these bombings, "the level of radiation in the area of ​​the power plant remains within the norm", underlines the press release from the Russian Ministry of Defense.

For its part, the Ukrainian nuclear agency accused Russia of having bombed the site of the plant.

"This morning of November 20, 2022, following heavy Russian bombing, at least 12 strikes were recorded at the site of the Zaporizhia nuclear power plant," Energoatom said, accusing the Russians of "once again organizing a nuclear blackmail and put the whole world in danger".

"There are those who consider a nuclear power plant to be a legitimate military target, which is incredible," the IAEA Director General was indignant.

The IAEA, which has two on-site inspectors at the plant, is carrying out an assessment. "There was damage in quite delicate places", estimated Mr. Grossi, specifying that the reactors had not been affected but "rather the zone where the fresh and spent fuels are".

"We expect to be able to make an inventory tomorrow (Monday) morning very early," he added, adding that the inspectors had not been able to go out on Sunday because the situation was too dangerous.

French President Emmanuel Macron spoke to the head of the IAEA on Sunday about the situation at the Zaporizhia plant and "will probably speak" to Ukrainian President Volodymyr Zelensky, according to the French presidency.

In his daily address, Ukrainian President Volodymyr Zelensky said nearly 400 Russian attacks took place in the east of the country on Sunday alone.

In the south of the country, in Kherson, which Ukrainian troops recently reconquered, the inhabitants were confronted with Russian bombardments, after eight months of occupation.

After the Russian army, pushed back across the river, shelled the industrial zone and set fire to an oil depot not far from their building, Yuri Mosolov and his wife decided it was time to leave. "After yesterday's shelling, my wife said don't take too many risks, let's go," Mosolov said.

Meanwhile, Ukraine on Sunday dismissed Russian accusations that it "brutally" killed Russian soldiers who had laid down their arms, which Moscow called a "war crime".

The Ukrainian army said it had verified the authenticity of the videos, which according to Moscow prove that kyiv executed a dozen Russians.

However, extracts from the videos show that the Russian forces pretended to surrender to open fire on the Ukrainian soldiers, in a "false surrender", argued Sunday Dmytro Lubinets, commissioner for human rights in the Ukrainian Parliament.

He considered that in this case the Russians "cannot be considered prisoners of war" and "retaliating is not a war crime".

AFP could not independently confirm these videos. A UN spokesperson, however, told AFP on Friday that the international organization was "aware of these videos" and was "reviewing" them.

Russia, which has been leading an offensive in Ukraine since February 24, is militarily occupying the territory of the plant. Russian President Vladimir Putin has demanded its annexation, as well as that of four Ukrainian regions.