Post a Comment Print Share on Facebook
Famagusta
DOLLAR 18,65
EURO 19,75
GOLD 1.083,47
BIST 4.962,97
These tips will help you become the perfect reader
Polars: nine nuggets to offer at Christmas... but not to just anyone!
The secret of the Pfister siblings
Back to the Stone Age? The abolition of agriculture
The most beautiful Christmas film without Christmas
FDP demands fundamental reform of public service broadcasting
Schlesinger planned the RBB "Digital Palace" for 311 million...
The failure of the totalitarian no-Covid idea - and the silence of its...
The failing state and its new theaters of war
Schlesinger planned the RBB "Digital Palace" for 311 million...

Russians fleeing their country after the mobilization decreed on September 21 by Vladimir Putin are more and more numerous. 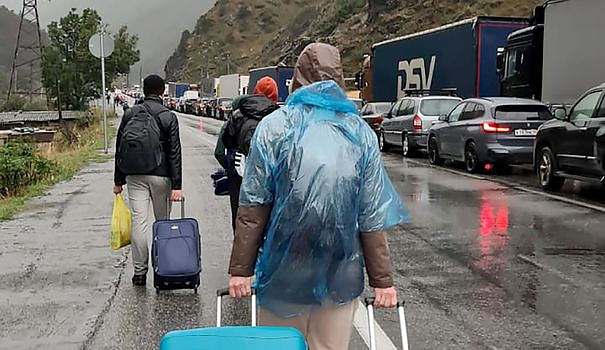 Russians fleeing their country after the mobilization decreed on September 21 by Vladimir Putin are more and more numerous. Georgia and Kazakhstan, two neighboring countries, confirmed this trend on Tuesday, September 27: the arrivals of Russians in Georgia almost doubled, to nearly 10,000 per day, after this announcement, indicated the Ministry of the Interior of this Caucasian country.

On Sunday September 25, the Russian authorities acknowledged for the first time that there was a large influx of Russians at the borders, not only in the Caucasus, but also towards Kazakhstan, Mongolia and Finland.

With around 17,000 entries, the Finnish border guards announced that they had recorded the busiest weekend of the year for Russian entries, twice as many since the announcement of Moscow's "partial" mobilization for the war in Ukraine. "This weekend was the busiest of the year in terms of traffic from the eastern border," Mert Sasioglu, a border authority official, told AFP. On Saturday September 24, 8572 Russians entered Finland via the land border - for 4199 exits to Russia, and 8314 on Sunday - for 5068 exits, according to statistics released on Monday. Thursday, September 22, the number of Russian entries had exceeded 6,000, against around 3,000 at the start of the week.

Finland announced last Friday "significantly" limiting the entry of Russian citizens on its soil, now refusing access to those with tourist visas from a European country in the Schengen area. The Nordic country thus aligns itself de facto with the decision taken at the beginning of September by Poland and the three Baltic countries (Estonia, Latvia, Lithuania), the four other countries of the European Union bordering Russia.

"After the government's decision, it can come into effect very quickly," Finnish Foreign Minister Pekka Haavisto told a news conference, but did not give a date. “Those who cross the border with a tourist reason will be prevented from entering. There must be another reason,” he explained. The decision applies both to visas granted by Finland and to those issued by any other country in the Schengen area, said the head of Finnish diplomacy.

Finland, which shares a border of about 1300 km with Russia, had already decided to divide by ten the number of tourist visas granted to Russians from September 1. But Helsinki has so far allowed those with tourist visas valid in the Schengen area to pass. At the beginning of the summer, the lifting of anti-Covid restrictions on both the Russian and Finnish sides had resulted in a sharp increase in the passage of Russians via Finland, at the border or via Helsinki airport. The presence among these of many holidaymakers with European visas using the country as a stopover to travel elsewhere in the European Union had sparked a controversy and pushed the executive to adopt the first restrictions.

For its part, the Interior Ministry of Kazakhstan, a former Soviet republic in Central Asia, indicated that 98,000 Russian citizens had arrived in the country since September 21. However, he did not provide any comparison with the previous week.

Kazakh President Kassym-Jomart Tokayev assured him on Tuesday that his country would protect Russians fleeing to Kazakhstan to escape mobilization. "In recent days, many people come to us from Russia. Most are forced to leave because of a hopeless situation," Kassym-Jomart Tokayev said. "We have to take care of them, keep them safe," he added.

Quoted by the Interfax agency, the Kazakh Interior Minister, Marat Akhmetjanov, indicated on Tuesday that Astana would be forced to extradite Russians fleeing the mobilization only in the event that the latter were placed on the official list of persons wanted in Russia. The Russian Ministry of Defense for its part indicated that it would not solicit foreign governments to obtain the extradition of the thousands of Russians who fled the country in order to escape mobilization to fight in Ukraine.

Kazakhstan, a former Soviet republic in Central Asia, is a traditional ally of Moscow. But this country, which cultivates good relations with the West and China, has distanced itself since the offensive in Ukraine. Moscow's offensive against Ukraine has awakened fears among some Kazakhs of also becoming the target of Russian ambitions, particularly because of its long border with Russia and its large ethnic Russian minority.

In Georgia too, the number of Russians entering this country "has increased to some 10,000 a day", the interior ministry of this Caucasian country said on Tuesday. "For example, they were 11,200 on Sunday and less than 10,000 on Monday", against "5,000 to 6,000" just before the announcement of the mobilization in Russia on September 21.

On the border with Georgia, the authorities of the Russian region of North Ossetia admitted a "tense situation" at the Verkhni Lars checkpoint. The local Ministry of the Interior has announced the forthcoming installation of a "military mobilization commission" in the border area in order to recruit reservists who are trying to leave. At the border, a line of vehicles almost twenty kilometers long has formed, while others pass by on bicycles and even on foot, bags on their backs or dragging their luggage behind them.

"I had no choice but to flee Russia," Nikita told AFP after crossing the Georgian side of the border at Kazbegi post, located in a narrow, rocky gorge. "What reason would I have to go to this crazy war? I'm not cannon fodder, I'm not a murderer," continues the 23-year-old. Alexandre Soudakov, a 32-year-old executive, judges him with AFP that the mobilization was "the straw that broke the camel's back". "The Ukrainians are our brothers. I don't understand how I could kill them, or get myself killed," he said.

This wave of exiles is the second observed in Georgia after a first series of departures to this country just after the outbreak of the invasion of Ukraine by Russia on February 24. The influx of Russian exiles has received a mixed reception in Georgia, a state where the painful memory of the 2008 war with Moscow is still fresh in people's minds. The five-day conflict culminated in Russia's recognition of two breakaway pro-Russian Georgian republics, Abkhazia and South Ossetia, where Moscow is stationing troops.