This retreat is the third in magnitude since the start of the invasion on February 24, Russia having given up in the spring to take kyiv, before being defeated in the northeast in September, abandoning almost the entire region. 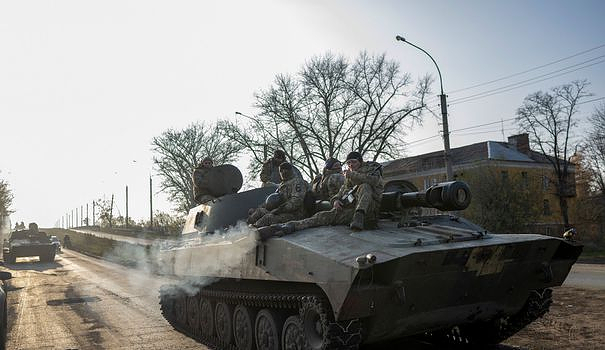 This retreat is the third in magnitude since the start of the invasion on February 24, Russia having given up in the spring to take kyiv, before being defeated in the northeast in September, abandoning almost the entire region. from Kharkov.

"Ukraine is winning another important victory right now and proving that whatever Russia says or does, Ukraine will win," Ukrainian Foreign Minister Dmytro Kouleba tweeted.

He posted on his account a video showing, according to him, residents of the locality of Bilozerka, a few kilometers from the city of Kherson, tearing down a gigantic poster proclaiming "Russia is here forever".

The Ukrainian army did not immediately announce that it had entered the regional capital.

At the start of the afternoon on Friday, the Russian Ministry of Defense announced that it had completed at 5 a.m. Moscow (0200 GMT) "the redeployment" of its units from the right bank of the Dnieper river, where Kherson is located, to that of left, ensuring that he had not suffered any loss or abandoned military equipment.

This withdrawal is all snub, Vladimir Putin having claimed at the end of September, during a ceremony with great pomp in the Kremlin, the annexation of four Ukrainian regions, including that of Kherson.

The Russian president had warned that he would defend "by all means" what he considers to be Russian territories, brandishing the threat of recourse to nuclear weapons.

But faced with a Ukrainian counter-offensive launched at the end of the summer, the Russian army announced on Wednesday that it was going to abandon the northern part of the Kherson region, to consolidate its positions on the other side of the Dnieper, a natural barrier.

Despite this retreat, the area remains "a subject of the Russian Federation", Kremlin spokesman Dmitry Peskov said on Friday.

"There can be no change," he added in the Russian presidency's first comment on this retreat.

Mr Peskov added that the Kremlin "does not regret" its September annexation ceremony.

The decision to withdraw from part of southern Ukraine is all the more remarkable since Vladimir Putin had ordered on September 21 the mobilization of some 300,000 reservists precisely to consolidate the Russian lines in difficulty.

Several Russian correspondents then indicated, with supporting images, that the viaduct had been destroyed.

Ukraine shelled this bridge, the only one in the city of Kherson, for weeks, without destroying it, to make it difficult to cross, thus cutting the Russian supply lines and forcing Moscow to decide to withdraw.

The Ukrainian general staff, which had claimed Thursday a dozen localities taken over, confined itself to saying Friday morning that its offensive during the day "continued" and that its results will be communicated "later".

Ukraine had been very cautious over the past two days about the Russian withdrawal, fearing a feint, or that the Russian army would mine the entire area to make the return of Ukrainian forces as difficult as possible.

Russia has also continued to carry out strikes across Ukraine, where part of the energy infrastructure has been destroyed in recent weeks, leading to power cuts in large parts of the country, including in Kyiv, the capital. .

A strike was again targeted, on the night of Thursday to Friday, Mykolaiv, a city in southern Ukraine about a hundred kilometers from Kherson.

A five-storey apartment building was completely destroyed there, killing at least seven people, according to the head of the regional administration, Vitaliy Kim, who denounced on Telegram "a cynical response by the terrorist state to our successes on forehead".

An AFP journalist on the spot was able to see a gutted building and the rescuers advancing through the rubble. A backhoe cleared the many debris.

On the eastern front, the fighting also continues to rage, particularly in Bakhmout, a city that Moscow has been trying to conquer since the summer and the main battlefield where the Russian army, supported by the men of the paramilitary group Wagner, stay on the offensive.