Ukraine figures its gains in the South, Moscow says to stand firm

Ukrainian troops have been on the offensive on all fronts since the beginning of September and have already taken over most of the Kharkiv region in the northeast, and important logistics nodes such as Izium, Kupiansk and Lyman. 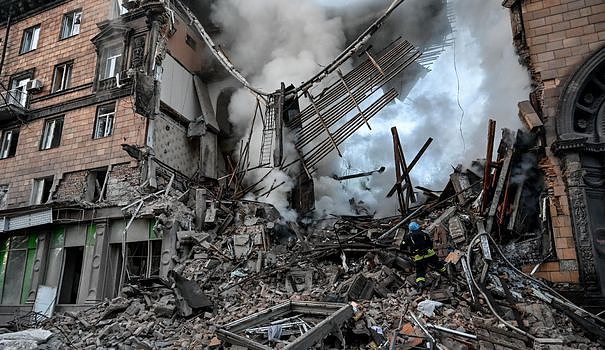 Ukrainian troops have been on the offensive on all fronts since the beginning of September and have already taken over most of the Kharkiv region in the northeast, and important logistics nodes such as Izium, Kupiansk and Lyman. In the latter, in the East, the troops from Moscow, then almost surrounded, came close to disaster.

"The Ukrainian armed forces have liberated more than 400 km2 of the Kherson region since the beginning of October," spokeswoman for the military command in the South, Natalia Goumenyuk, said Thursday, quantifying for the first time the progress Ukrainians.

Ukrainian President Volodymyr Zelensky announced on Wednesday evening the recapture of three new villages by his troops in this area, while confirming that the kyiv counter-offensive, strong in Western arms deliveries, was continuing.

Ukrainian forces claim to have recaptured 29 localities from the Russians since October 1.

The Moscow army assured in its daily report Thursday that "the enemy [had] been repelled from the line of defense of Russian troops" in the same region of Kherson.

According to her, the Ukrainian forces deployed four tactical battalions on this front, ie several hundred men, and "several times tried to break through the Russian defenses" near Dudtchany, Sukhanové, Sadok and Bruskinskoye.

Faced with the setbacks of the Russian army in Ukraine and a chaotic mobilization in Russia which has pushed hundreds of thousands of Russians into exile, Russian President Vladimir Putin assured Wednesday that the military situation will "stabilize".

Even though Moscow only partially controls these areas and is in difficulty there militarily, Mr. Putin had signed a law on Wednesday enshrining the annexation by Russia of four Ukrainian regions after the holding of "referendums" of self-determination without "any legal value" in the eyes of UN Secretary General Antonio Guterres, and denounced as "simulacra" by kyiv and its allies.

Mr. Putin's spokesman, Dmitry Peskov assured that the lost territories would be "taken back". The Russian president had mentioned to him in September the threat of the use of nuclear weapons.

In the theater of operations, the Ukrainian soldiers interviewed by AFP assured to finally see "the light at the end of the tunnel", thanks to their recent successes, after more than seven months of a grueling war.

"Now it's better," said 29-year-old Bogdan. "We see their successes and it inspires us. If some people thought we weren't going fast enough, now that's not the case anymore!"

On the front, the bombardments continued with in particular a strike which left three dead and seven wounded in Zaporijjia, in the south of Ukraine, one of the regions that Moscow claims to have annexed.

AFP saw two sites in the center of the city ravaged by bombs. From the first, everything above the ground floor collapsed, raising fears of a higher toll. A few hundred meters away, a crater several meters deep is visible in front of an apartment building, with a blown roof, as are most of the windows.

In the east, in the Donetsk region, another territory annexed by Moscow, at least 14 people have been killed and 3 injured in the past 24 hours in areas under kyiv control, according to the Ukrainian presidency.

kyiv also receives a visit on Thursday from the director of the International Atomic Energy Agency (IAEA), Rafael Grossi, who is also due to go to Moscow soon.

In particular, he wants to discuss the establishment of "a protection zone" around the Zaporijjia nuclear power plant, regularly targeted by shots for which Russians and Ukrainians mutually blame each other.

On the eve of this visit, Russia appropriated via a decree signed by Vladimir Putin this power plant, the largest in Europe, which it has controlled since March, provoking the indignation of kyiv.

On the diplomatic front, 44 leaders from the European continent met in Prague on Thursday in an unprecedented format, intended to underline Moscow's isolation.

On Wednesday, the EU approved an eighth round of sanctions against Moscow. OPEC has decided on a drastic cut in oil production quotas to support prices, while hydrocarbons remain Russia's main income.