Ukraine denounces another grave in Mariupol with 100 people dead

On Friday, the Ukrainian authorities condemned the discovery of a second mass grave containing more than 100 corpses in Mariupol in the Ukrainian region Donetsk. 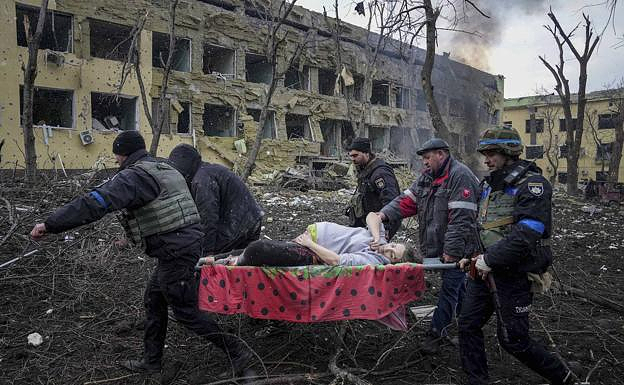 On Friday, the Ukrainian authorities condemned the discovery of a second mass grave containing more than 100 corpses in Mariupol in the Ukrainian region Donetsk. The rubble-covered burial is at 53 Kievskaya Street. This would suggest that the bodies were first buried in the courtyard of the building, and then bombings destroyed it.

The city was occupied until the Russian troops' devastating siege. Before that, residents had to bury their dead in their homes, parks, or any other place. Petro Andriushenko (deputy mayor of Mariupol) said that the bodies found yesterday were there since February. "The occupants have begun to raise the rubble, but no one is talking about burying it. People still live in basements. Andriushenko stated that the exhumation had stopped.

He said that the occupation authorities were so focused on creating an image of the reconstruction city, they decided to not bury them again. The official from the municipality stated that temporary street graves are slowly becoming permanent.

Amnesty International claims that in March Russian troops were aware of civilians living in the basement at the Mariupol Drama Theater, and they attacked them. There were many people trying to escape the bombs, including hundreds.

The images of satellite imagery in Mangush, 20 km from Mariupol, helped to locate the first mass grave in the area. It contained several thousand bodies. There could be as many as 3,000 to 9,000 bodies inside it, according to estimates. Many other large burials were later found in the area and surrounding areas.

Mariupol believes that there have been more then 25,000 deaths in the entire area since February 24, when the invasion began. On March 1, Mariupol was under siege. The offensive against Mariupol began on the next day. The fighting and constant shelling continued for two months in central Mariupol, but then it was stopped at the Azovstal steelworks. It was surrendered by its defenders at May's end.

Russia claims it is targeting infrastructure and military sites. In reality, however, the attacks often target civilian areas such as apartment blocks. Experts in military analysis believe this is an intentional attempt to undermine the country's morale. It can sometimes have the opposite effect, and even strengthen the resolve of Western nations. Even if Russia didn't intend to kill civilians it shows that its weapons can be inaccurate.

Russia's long-range missile strikes are a sign of both weakness and strength. These attacks must be conducted outside of Ukrainian airspace. Russia does not have control over the skies. It can't also conduct surveillance or reconnaissance flights above the country to collect intelligence. It is not secret that the Kremlin wants to strike military supply lines from west. It is not clear that this has been very successful. Weapons are being shipped to Ukraine from overseas.

‹ ›
Keywords:
HallanMariupolNuevaFosaComunCienCadaveres
Your comment has been forwarded to the administrator for approval.×
Warning! Will constitute a criminal offense, illegal, threatening, offensive, insulting and swearing, derogatory, defamatory, vulgar, pornographic, indecent, personality rights, damaging or similar nature in the nature of all kinds of financial content, legal, criminal and administrative responsibility for the content of the sender member / members are belong.
Related News