NATO Secretary General Jens Stoltenberg assured that the supply of these systems capable of neutralizing Russian missiles in the Ukrainian sky was "the priority". 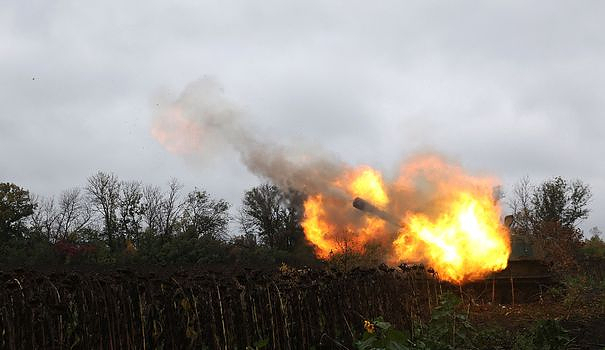 NATO Secretary General Jens Stoltenberg assured that the supply of these systems capable of neutralizing Russian missiles in the Ukrainian sky was "the priority".

The promise comes after Ukraine came under "massive" salvos of missiles, rockets and drones on Monday and Tuesday, targeting in particular its civilian energy infrastructure. Russian President Vladimir Putin presented the strikes as retaliation for the explosive attack that damaged the Crimean bridge and which he blames on kyiv.

Ukrainian Defense Minister Oleksiï Reznikov has already hailed "a new era of air defense" with the arrival of the "Iris-T system from Germany" and the upcoming delivery of "American NASAMS".

Attending a NATO meeting at the US military base at Ramstein in Germany, he said he was "optimistic" about further announcements.

On Tuesday, in a virtual meeting with the G7, Ukrainian President Volodymyr Zelensky had called for help to create an "air shield", warning that Mr. Putin "still had the means for an escalation".

Russia, for its part, announced on Wednesday the arrest of eight people suspected of participation in the attack on the Crimean bridge and claimed to have thwarted two attacks fomented by Ukrainian special services on Russian territory.

Vladimir Putin had promised a "severe" response to any attack targeting Russia and what it considers to be its territory, while Moscow proclaimed the annexation of Crimea in 2014, then four other Ukrainian regions in September.

kyiv has neither confirmed nor denied its involvement in the explosion on the bridge connecting Russian territory to Crimea, but Ukraine has always stressed that it intends to reconquer this peninsula and all the territories occupied by Russia since the invasion launched on 24 February.

On the southern front, in the Kherson region, one of the four which Moscow has claimed to be annexed, five new localities have been reconquered, the Ukrainian presidency said on Wednesday, which would be the latest setback for the army. which has been retreating in this zone as in the northeast and east since the beginning of September.

But she noted that Russian artillery was putting up resistance "to deter the counter-offensive all along the line of contact."

The Russian Ministry of Defense assured him that he had pushed back the Ukrainians in the small pocket of the Kharkiv region (northeast) still under Moscow control, in the north of the Kherson region and in the eastern regions of Donetsk and Lugansk .

Ukraine for its part indicated that a Russian strike on a market on Wednesday morning in the town of Avdiivka, close to the front line in the east, left at least seven dead.

US President Joe Biden noted on Tuesday that his Russian counterpart had "clearly" misjudged the situation in Ukraine and had "made a complete miscalculation" on the resistance he would encounter.

He also deemed it "irresponsible" that Mr. Putin could threaten to use a tactical nuclear weapon to defend what he considers to be his conquests, while believing that Moscow would not use such a bomb.

In the east, the Ukrainian authorities have announced the discovery of two new mass graves in towns in the Donetsk region recently retaken from Russian troops.

In Lyman, a railway junction taken over in early October, a forensic team dressed in protective gear exhumed dozens of bodies, noted an AFP journalist.

"We have already found more than 50 bodies of soldiers and civilians. We have a long trench, a mass grave, where we found bodies and body parts," said Pavlo Kyrylenko, governor of the Donetsk region.

Russia has been accused of numerous abuses - torture, rape, summary executions - in the cities from which it withdrew. Moscow has consistently denied the involvement of its soldiers despite mounting evidence.

Finally, on the energy front of the conflict, President Putin returned on Wednesday to the sabotage which damaged the Nord Stream gas pipelines, the keystone before the war of European gas supplies from Russia.

According to him, Moscow is willing to resume the resumption of deliveries through an undamaged pipe. "The ball is in the EU's court", he judged, while Russians and Westerners accuse each other half-wordly of the underwater explosions which targeted these installations.