Ukraine: arrival in Romania of a ship loaded with 1,000 tonnes of French aid

After more than 30 humanitarian road and air convoys organized by France, this humanitarian shipment is the largest sent since the start of the Russian invasion. 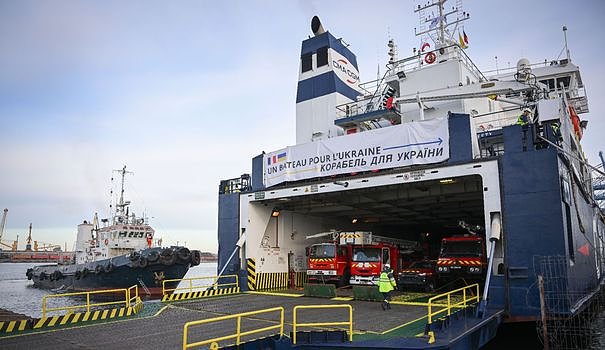 After more than 30 humanitarian road and air convoys organized by France, this humanitarian shipment is the largest sent since the start of the Russian invasion. And it is the first partially dedicated to the reconstruction and development of emergency infrastructure.

It is also carrying demining equipment, 25 tons of medical equipment and 60,000 food rations, according to the French Ministry of Foreign Affairs.

On the docks of the port of Constanta, through which Ukrainian wheat also transits, Paun Rohovei, representative of the Ukrainian Embassy, ​​expressed his gratitude. This aid "proves once again that the fraternal ties with Europe and the civilized world are very important and strong", he said.

The material was to be sent on Wednesday to the humanitarian center in the city of Suceava, near the Ukrainian border.

The operations will last until October 9, specified Mihai Lupu, the representative of the Romanian emergency services which organize the logistics.

The aid will then be transported by rail and Ukrainian trucks to the beneficiaries, including the towns of Chernihiv, north of kyiv, 70% destroyed by the bombings according to its mayor, and Odessa (south).