Traditions have been finely respected. 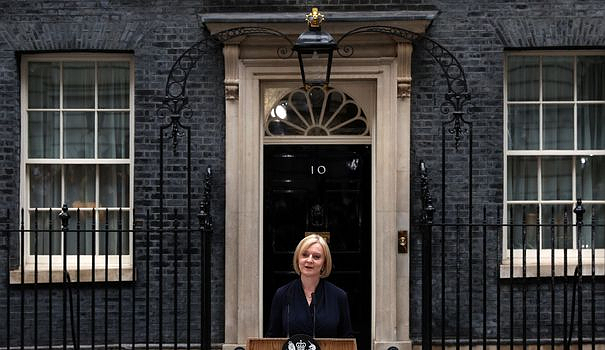 Traditions have been finely respected. Tuesday September 6, after her sovereign meeting with the Queen and the transfer of power with her predecessor, Boris Johnson, Liz Truss delivered her general policy speech and unveiled the outlines of her government in front of the door of the residence at 10 Downing Street .

From the first words of her presentation, she broke with Boris Johnson, despite their belonging to the same political family. In key positions in his government, only Ben Wallace, very popular, is kept in Defense, in the midst of the war in Ukraine. Liz Truss reaffirmed her liberal positions on economics and conservative on social issues. "We can get our economy back on track and transform the UK into the modern, bright country that it can be," she urged.

It will immediately be confronted with a situation of social crisis since millions of Britons are taken by the throat by soaring prices. To confront it, the conservative presented a government team very marked on the right, which is characterized by its diversity. Review of the main faces.

Friend and neighbor of Liz Truss, Kwasi Kwarteng will be an essential cog in the Truss machine. Inheriting the portfolio of government minister responsible for finance and the treasury, the former Secretary of State for Business, Energy and Industrial Strategy will be at the heart of the government system in the coming months. He will have to manage the galloping inflation in the United Kingdom, in particular in the energy sector, at the origin of a social crisis and a movement of general strike which paralyzes a good part of public transport.

Son of immigrants from Ghana who arrived in the London region in the 1960s, Kwasi Kwarteng is a liberal, follower of low taxes and a market economy, in line with Margaret Tchatcher. He will therefore be keen to set up the tax cuts promised by Liz Truss with a view to reinvigorating the purchasing power of British households. He also promised to tackle the reduction of the British debt - while it is one of the lowest in Europe with that of Germany. This pure product of the British university had made himself known by co-authoring the book Britannia Unchained, which described British workers as "the worst lazy people in the world".

Wokism is not only talked about in France: it is also the subject of comments and hiccups in the United Kingdom. The main defender of woke thought across the Channel is called Suella Braverman. She has just been appointed Minister of the Interior. This 42-year-old former lawyer, of Indian origin through her parents, is a very conservative elected official. She will have to manage the migration crisis and the question of the arrival of migrants on the English coast. The previous government had signed a controversial agreement to send asylum seekers to Rwanda, to which the new minister subscribed. This agreement could be operational under his mandate.

Unfailing support of Liz Truss for ten years, Thérèse Coffey is rewarded for her loyalty. The new Prime Minister's campaign manager has been named Vice-President. Previously Minister of Pensions, she was promoted to Minister of Health. An eminently crucial position as British hospitals are overwhelmed, with 6.7 million Britons awaiting treatment or an operation.

Fervent support of Liz Truss, James Cleverly should, like Thérèse Coffey, stand out for his loyalty. In a post where it was once a question of the Prime Minister appointing herself to keep her hand on British diplomacy, she finally appointed a lieutenant. After two years as Secretary of State for Foreign Affairs, then a brief stint as Minister of Education, James Cleverly is enjoying the biggest promotion of his career.

The new Minister of Foreign Affairs has already announced that his government will adopt a hard line against Moscow and Beijing. He will also have to take care of his relations with his European counterparts in a context of energy crisis, coordinated sanctions against Russia and its oligarchs, as well as tensions around the application of the exit protocol from the European Union. . Fervent supporter of Brexit, James Cleverly should be intransigent with regard to the Twenty-Seven.

As for the rest of the line-up, Jacob Rees-Mogg is promoted to Minister for Economic Affairs and Energy, a key portfolio for this die-hard reactionary who spent most of his time as Minister for Brexit opportunities, to hunt down civil servants he deemed unproductive. Chris Heaton-Harris, another notorious Eurosceptic, has been appointed Minister for Northern Ireland.

Opposed to Truss to take the lead of the conservative party, Rishi Sunak, considered a moderate, does not appear in the government. Other heavyweights from the previous cabinet, such as Dominic Raab or Michael Gove, did not inherit any post and became MPs again.