Harem Ahmed Abwbaker, 32, was arrested in the South West of England and 'is suspected of being a member of the organized crime group which conspired to transport the migrants to the UK on a small boat ", said the British crime agency (NCA) in a press release. 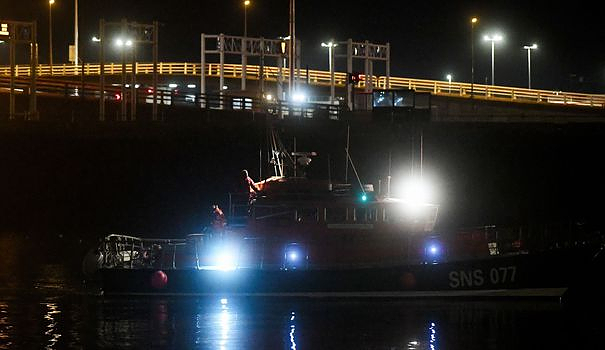 Harem Ahmed Abwbaker, 32, was arrested in the South West of England and 'is suspected of being a member of the organized crime group which conspired to transport the migrants to the UK on a small boat ", said the British crime agency (NCA) in a press release.

On the night of November 23 to 24, 2021, twenty-seven migrants aged 7 to 46 - sixteen Kurds from Iraq, one Kurd from Iran, four Afghans, three Ethiopians, one Somali, one Egyptian and one Vietnamese - had died. in the sinking of their inflatable boat off Calais, while trying to reach England.

Only two passengers, an Iraqi Kurd and a Sudanese, had been rescued.

Mr Abwbaker "will remain in custody to appear tomorrow (Wednesday) in Westminster Court, where the extradition process will begin", said the NCA, which stresses having "identified and tracked down" the suspect and worked with the French authorities to investigate the circumstances leading to the deaths.

"This is a significant arrest, which is part of a thorough investigation" into the sinking, reacted the deputy director of the NCA, Craig Turner. "The individual detained today is suspected of having played a key role" in the case, he added.

For her part, British Home Secretary Suella Braverman "thanked the NCA and other agencies in the UK and France for their tireless work to bring justice to the victims and their families".

Ten alleged members of the smuggling network behind the crossing were indicted this summer in France as part of an investigation opened last December.

They are suspected, according to a source familiar with the matter in France, of being to varying degrees involved as drivers, smugglers or landlords.

The case recently took on another dimension after the revelations in mid-November of the newspaper Le Monde which claimed that the passengers of the boat had called the French authorities fifteen times to ask for help, in vain.

Le Monde, which says it has consulted elements of the judicial investigation carried out in Paris, also suggests that French rescuers waited for the castaways to drift into English waters, arousing the "consternation" of several migrant aid associations.

In a telephone conversation with the French authorities, of which AFP became aware, a migrant said: "Help please (...) I'm in the water". "Yes, but you are in English waters Sir", replies his interlocutor.

"Ah well, don't you hear, you won't be saved. My feet are in the water, well, I didn't ask you to leave", also says the operator.

More than 40,000 migrants have arrived in the UK after crossing the English Channel in small boats this year, a record.

These rising figures are putting pressure on the government as the Tories have made tackling immigration one of their top priorities since Brexit and the asylum system is more overwhelmed than ever.

Successive governments have considered everything, abandoning certain ideas deemed illegal or impractical such as pushing boats out of British waters with artificial waves, locking migrants on ocean liners offshore or sending them to remote islands. The latest plan, announced under Boris Johnson, plans to send asylum seekers to Rwanda but this plan has stalled.

After years of quarrels between Paris and London on the issue, the two countries signed an agreement in mid-November which provides in particular for an envelope of 72.2 million euros that the British will have to pay in 2022-2023 to France to increase from 800 to 900 the number of police and gendarmes on the French beaches, from where the migrants leave.