The city joined the "Horeca Campaign" to collect glass containers from restaurants and hotels. 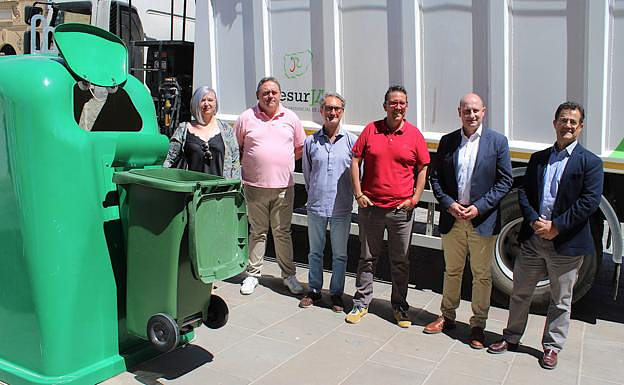 The city joined the "Horeca Campaign" to collect glass containers from restaurants and hotels. This is an initiative that Resurja has been involved in for some time. Resurja is dependent on the Diputacion de Jaen which manages the collection of recyclables. Jeronimo Garcia, the Councilor for Infrastructure Maintenance stated that the hotel industry is an important sector of the city. There are more than 300 hotels that produce large quantities of glass waste. He stated that "it is important to encourage sustainable and eco-friendly habits in these establishments in order to recycle more, and meet the 2030 Agenda objectives."

This campaign aims to improve the cooperation between the restaurants and hotels in the participating municipalities for the collection and recycling of glass. Thanks to Ecovidrio and the collaboration between the provincial government and Ecovidrio, all participating establishments will receive specific buckets for separating and depositing glass containers waste.

This year, seven municipalities in the province have taken part in this sustainable action, including Ubet. The intention is to continue the work in the future so that all 97 towns can be included in the 'Horeca campaign'.

Jose Luis Hidalgo (deputy for municipal services), stated that the campaign was also designed to promote sustainable tourism and thus provide a bonus of quality. He said that the proposal includes several steps and actions for the integration and correct use of containers as well as the disposal of glass waste.

First, the "Horeca" establishments will need to be registered. Their owners will be made aware of the regulations and control procedures. Recycling will also be checked and analysed. Later inspections will take place, where the regulations and non-conformities from previous visits will again be reported.

The campaign was presented in Ubeda. It explained that the glass from the green containers can be used to make new containers indefinitely without losing its original properties. He stressed that we must stop punishing the natural environment by extracting raw materials to make something already made, and that this will reduce our dependence on fossil fuels.

Citizens can take part in sustainable development and contribute to a circular economy. This will help combat climate change. Jesus Casas, Alciser's manager, stated that recycling glass is important at both the individual and hotel level. The association will promote this campaign in Ubet, making it a model for the province.

‹ ›
Keywords:
CiudadSumaCampanaRecogidaEnvasesVidrioSectorHosteleria
Your comment has been forwarded to the administrator for approval.×
Warning! Will constitute a criminal offense, illegal, threatening, offensive, insulting and swearing, derogatory, defamatory, vulgar, pornographic, indecent, personality rights, damaging or similar nature in the nature of all kinds of financial content, legal, criminal and administrative responsibility for the content of the sender member / members are belong.
Related News