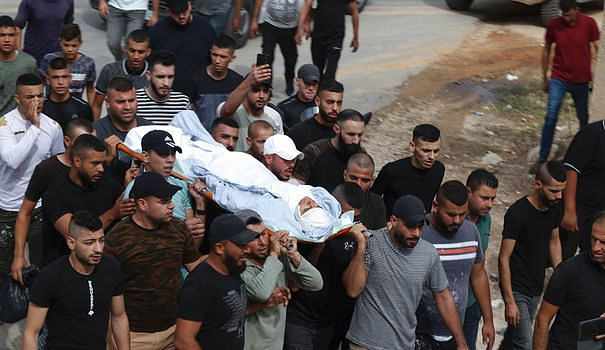 Israeli operations "will lead to an explosion and a point of no return, which will have devastating consequences for all", warned Nabil Abou Roudeina, spokesman for President Abbas, in a statement published by the news agency. official Palestinian Wafa.

In a statement, the Palestinian Ministry of Health said two Palestinians were killed and 11 injured "by bullets fired by (Israeli) occupation forces in Jenin", in the northern West Bank.

They identified the dead as Ahmad Daraghmeh, 16, and Mahmoud al-Sousse, 18.

The Palestinian movement Islamic Jihad, installed in the Gaza Strip, a Palestinian territory under Israeli blockade for more than 15 years, presented the two teenagers as "its martyrs".

The other Palestinian Islamist movement Hamas, which controls the Gaza Strip, hailed the "resistance in the West Bank" against Israeli troops.

The Israeli army said it carried out a raid in Jenin to arrest a 25-year-old Palestinian suspected of being a member of Islamic Jihad and of shooting at soldiers.

"During the operation, dozens of Palestinians threw explosive devices and Molotov cocktails at Israeli soldiers, who also came under fire," she said in a statement. "The soldiers responded by firing live ammunition at the armed suspects."

In recent months, Israeli forces have launched numerous raids in Jenin and other areas of the West Bank, searching for Palestinians suspected by the military of involvement in attacks or Palestinian activists. Dozens of Palestinians have been killed, including combatants and civilians.

According to the Wafa news agency, Israeli forces also fired on journalists during the raid in Jenin.

On Wednesday, two journalists were injured during an Israeli operation near Nablus in which a Palestinian was killed.

On Friday, two Palestinian teenagers were killed by Israeli gunfire elsewhere in the West Bank, according to an official Palestinian source.

The Palestinian Foreign Ministry then accused Israel of trying to “draw the region into a cycle of violence”.

The Palestinian Authority, which has its headquarters in Ramallah in the West Bank, exercises limited powers over approximately 40% of this territory. Israel, which controls all access, administers the rest of the West Bank.

About 475,000 Israeli settlers live in the West Bank alongside 2.8 million Palestinians. All Israeli settlements are deemed illegal under international law.