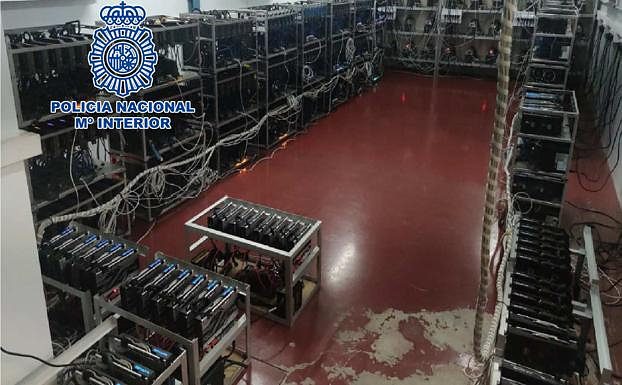 Two men were arrested by the El Ejido National Police (Almeria). They were looking for a hidden cryptocurrency farm that was located in an industrial warehouse at the Juaida industrial estate.

In March, the National Police Station El Ejido started to track the movements of two men. There were "sufficient indicators" that they participated "illicit business" related to the "indoor" cultivation of marijuana. This Sunday, the Police explained in a note.

Agents were led to two buildings used by the suspects as rental properties, and the home of one of the suspects on Bahia de Alboran Street.

The National Police discovered a sophisticated system to create cryptoactives and make computer notes that are associated with transactions. This is often called a "farm of mining". of cryptocurrencies

The agents intervened in a refrigerated area with an illegally hooked-up to the electrical system. They confiscated 344 processors as well as 37 'antminers, mining calculators, and plugged them into the continuous air extraction system. 1 350 euros of cash was also taken.

The Police says that there is no regulation in Spain regarding mining crypto assets. However, most cryptocurrency farms are owned by criminal organizations, which in turn invest in them. The illegal gains are used to create cryptocurrencies and to give legality to money acquired through unknown channels.

The National Police of El Ejido is currently analyzing the material and may arrest new people. This activity, in addition to not being within the forecasts of Tax Agency and General Directorate of Taxes--, implies a crime of theft of electricity, as technicians from Endesa have detected an illegal connection of nearly 200 amps, according the Police.

After the police action was completed, technicians from that electricity company unhooked the illegal connection and restored normal energy supply to the area. The illegal hookups were considered "a threat to the safety of persons" because they are devoid of protections that prevent excessive energy consumption. This can lead to short circuits, fires, or other serious consequences.

‹ ›
Keywords:
DesmanteladaDetenidosGranjaCriptomonedasOcultaPoligonoIndustrialEjido
Your comment has been forwarded to the administrator for approval.×
Warning! Will constitute a criminal offense, illegal, threatening, offensive, insulting and swearing, derogatory, defamatory, vulgar, pornographic, indecent, personality rights, damaging or similar nature in the nature of all kinds of financial content, legal, criminal and administrative responsibility for the content of the sender member / members are belong.
Related News