Sixth week of the 34th "Ciudad de Ubeda" International Music and Dance Festival will be dedicated to Joaquin Achucarro. 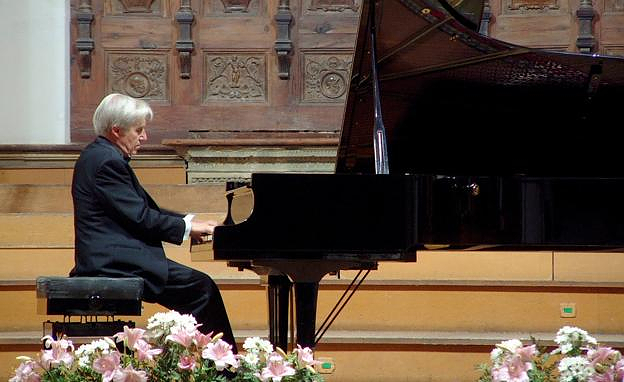 Sixth week of the 34th "Ciudad de Ubeda" International Music and Dance Festival will be dedicated to Joaquin Achucarro. He is a living legend in classical music and will take part in various activities over two intense days. He will perform, sign records, teach master classes, and be awarded the Gold Medal of Ubetense for his long and prolific career. He will also meet with the public through a conversation with Pedro Ruiz, the presenter.

Achucarro, who is nearing 90, will be returning to the Ubeda Festival to serve as resident artist. He will perform the most heartfelt part of the program, which this year is dedicated to the piano. The maestro is a national and international celebrity in the field of piano and has a long and sensitive career.

Joaquin Achucarro will present master classes to several registered students on Saturday, the 18th. The master classes will take place in the same auditorium so that the public can attend the event as a listener.

There will be two additional appointments at the Hospital de Santiago in the afternoon. Half past eight, the International Music and Dance Festival will award her her Gold Medal in recognition for her long and successful career. This is the same award that many other great musicians, including Montserrat Caballe and Jose Carreras, Jehudi Menuhin and Jordi Savall received in previous years.

Next, Joaquin Achucarro, will meet with the public at 9 o'clock in the evening. He will be having a conversation about Pedro Ruiz. This is a unique chance to meet the person, work and legacy of the master of masters. It will be called "Achucarro al natural". You can already request invitations (up to the limit) to the Festival website.

His victory at the Liverpool International Competition was a landmark in his life and career. His activities have led him to perform in 60 different countries in the most demanding venues. He has performed with some of the most prestigious orchestras in the world, as well as in recitals.

In recognition of his "extraordinary artistic works", he was named 'Artist for Peace" by UNESCO. He is Accademico ad Honorem of Accademiachigiana de Siena, Gold Medal for Fine Arts and National Prize for Music. The International Astronomical Union (IAU), in tribute to his universal trajectory, gave him a spot in the sky.

He has been recorded by some of the world's most prestigious labels and has won numerous awards. In 2008, the Joaquin Achucarro Foundation was established in Dallas to preserve his artistic legacy and support his student pianists in their early careers.

A few more acts will be performed during the sixth week of Ubeda Festival. The cycle "Music and heritage", which runs through various emblematic spaces in the World Heritage city of Santiago on Sunday 19th of October, will feature Irina Mureanu, the violinist, and Daniel del Pino, who will play the piano. This recital will commemorate the 200th anniversary the birth Cesar Franck.

On Thursday 16th, at half past eight, Juan Miguel Moreno Calderon (musician and writer) will host a conference. He will speak about Rafael Orozco (1946-1996), one of the most important pianists our country has ever produced. The Festival also includes the talk in "The Academy".

‹ ›
Keywords:
FestivalMúsicaDedicaraIntensasJornadasJoaquinAchucarro
Your comment has been forwarded to the administrator for approval.×
Warning! Will constitute a criminal offense, illegal, threatening, offensive, insulting and swearing, derogatory, defamatory, vulgar, pornographic, indecent, personality rights, damaging or similar nature in the nature of all kinds of financial content, legal, criminal and administrative responsibility for the content of the sender member / members are belong.
Related News