Haydar Ozkan But this animal rights defender knows that, without the support of the authorities, his efforts will not be enough to improve the conditions of street dogs, currently at the heart of a virulent controversy in Turkey. 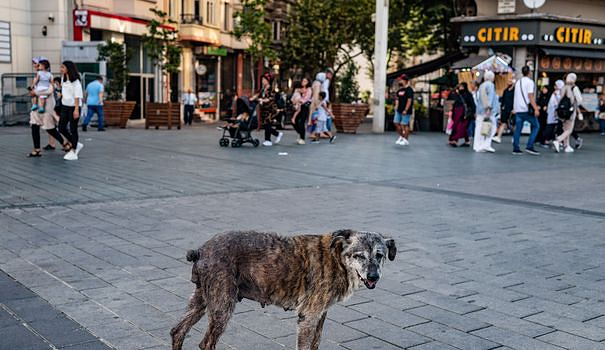 Haydar Ozkan But this animal rights defender knows that, without the support of the authorities, his efforts will not be enough to improve the conditions of street dogs, currently at the heart of a virulent controversy in Turkey.

"There are around 40 puppies here, born to five mothers. In six months, the females will in turn have babies. If they are not sterilized, imagine how quickly we can reach hundreds of dogs", exposes he.

Unlike most European countries, stray dogs and cats, whose population is estimated at several million across the country, are an integral part of daily life for Turks, many of whom take care of them.

In Istanbul, cats and dogs dozing on every street corner, often fond of caresses, are for many inseparable from the identity of the city.

"We are a society that coexists with animals. It's a tradition. Every neighborhood has its dogs and people who take care of them," summarizes historian Ekrem Isin, author of a book on street dogs. 'Istanbul.

But some, Turkish President Recep Tayyip Erdogan in the lead, are now questioning this tradition.

In December, after the attack on a girl by two pit bulls, however domesticated, the head of state had urged municipalities to place street dogs in shelters "in order to ensure the safety of our citizens".

"[Their] place is not in the street but in the shelters", he had launched, a statement seen as targeting the mayor of Istanbul Ekrem Imamoglu, figure of the opposition and potential candidate for the presidential election of June 2023.

Two months earlier, Mr. Imamoglu, a skilled communicator, had been accused of surfing the story - which has gone viral - of Boji, a street dog spending his days using Istanbul's public transport.

The controversy took a new turn when groups calling for "cleaning the streets of dogs" organized themselves on social networks.

An application called Havrita, which allows you to locate them on a map, was even launched in May.

“Since then, there have been several killings of dogs by poisoning and the discourse calling for their elimination has been normalized,” says Gulsaniye Ekmekci, of the Istanbul Bar Association, who filed a complaint against the app.

"Havrita has also incited violence against the volunteers who feed them. Several have been attacked," says Volkan Koç, founder of the Patilikoy shelter in Ankara.

A court in Ankara finally banned access to Havrita two weeks ago.

“Municipalities failed in their duty of sterilization. When the dog population increased, they moved them from one place to another, causing the formation of sometimes aggressive packs,” says Ms. Ekmekci.

Despite this, the number of attacks committed by stray dogs remains marginal, she says.

Among some Turks, the current controversy revives the memory of the tragedy of Hayirsizada (the cursed island, in Turkish).

In 1910, in a desire to modernize Istanbul on the model of the great European capitals, the Ottoman authorities deported nearly 80,000 stray dogs to a desert island in the Sea of ​​Marmara.

Most died of hunger and thirst.

"One has the impression that a hundred years later, dogs are once again being used as scapegoats," said Serge Avédikian, winner of the 2010 Palme d'Or for best short film at the Cannes Film Festival for his film Chienne d' story about the drama of Hayirsizada.

"It reflects the state of mind of a society that doubts itself. (...) A civil society at peace could find an agreement through dialogue that the best for dogs is to be adopted," he added.

For Volkan Koç, however, the specter of Hayirsizada is a thing of the past. “Animal rights activists are a tight-knit and very numerous group today,” he notes.

"The Europeans solved this problem by sterilizing the dogs and having them adopted. We may be behind on this, but our people have a good heart. We will never let a minority harm the animals."