Departing from Sfax, in central-eastern Tunisia, towards the Italian coast, the migrants equipped with black buoys reluctantly obeyed the orders of the maritime gendarmes, whom an AFP team accompanied on board their patrol boat. 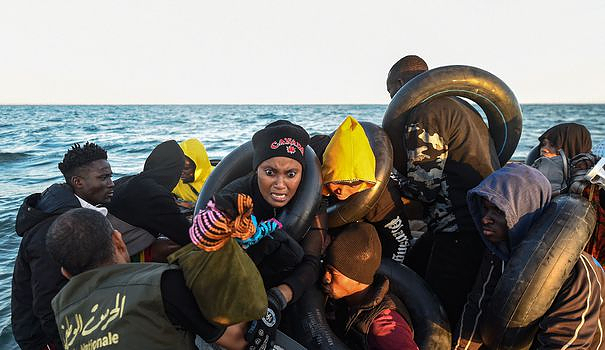 Departing from Sfax, in central-eastern Tunisia, towards the Italian coast, the migrants equipped with black buoys reluctantly obeyed the orders of the maritime gendarmes, whom an AFP team accompanied on board their patrol boat. , Eagle 35.

Italy, some of whose coasts are less than 200 km from the Tunisian coast, announced in May 2021 an agreement with Tunisia to provide it with economic aid in exchange for increased efforts on its part to prevent migrants from arriving. in Europe.

"I don't want to stay in Tunisia, life here is difficult," sobbed Fatim, an 18-year-old Ivorian, boarding the patrol boat with 25 other intercepted migrants.

Idia Sow, a 26-year-old Guinean suffering from the after-effects of a stroke, was part of another group intercepted in an inflatable boat. She claims to have spent the equivalent of 1,500 euros to reach the Italian coast with her three-month-old baby.

In the night of Monday to Tuesday alone, no less than 130 migrants, all from sub-Saharan Africa, including children, took part in four failed crossings off Sfax, the main point of departure for migrants in Tunisia.

But barely brought back to the port, these migrants were released on the orders of the public prosecutor of Sfax.

"We are in a vicious circle. We are deploying enormous means and efforts to arrest these migrants only to have them released, and then we will find them during other attempts," laments the captain of the patrol boat, Colonel Major Brahim Fahmi.

The majority of intercepted migrants met by AFP have indeed acknowledged that they would make another attempt. "If I find a boat now I will leave immediately, I will never give up," said Ali, a 20-year-old Guinean.

A few hours before the interception at sea, gendarmes dispersed more than a hundred migrants gathered in Hmayazia, a coastal town about thirty km from Sfax where they had been waiting for two weeks for boats supposed to transport them to Italy, according to testimonies collected by AFP.

Batons or handguns in hand, the gendarmes forced the migrants to leave the scene, AFP noted.

“This summer, we reached a record number of more than 17,000 migrants intercepted off the coast of Sfax, the director of the maritime gendarmerie for the central region (Sfax, Kerkennah and Mahdia) Colonel Major Saber Younsi told AFP. This is almost double compared to previous years."

"Sfax has become a hub (for illegal migration, editor's note), yet it is not the closest to the Italian shore and navigation in the offshore waters is difficult compared to other coastal regions", adds -he.

A clandestine boat manufacturing industry has developed in the town, helping to increase the number of smugglers operating there.

Tunisia, in the grip of a serious socio-economic and political crisis, has recorded a sharp increase in illegal emigration in recent months, with entire families and executives seeking to leave and no longer just young unemployed people.

According to the latest official statistics, more than 22,500 migrants have been intercepted off the Tunisian coast since the beginning of the year, of which around 11,000 are from sub-Saharan Africa.

During the same period, 536 organizers and smugglers, including 21 foreigners, were arrested.

"If this trend continues, we will reach a point where we will no longer be able to counter this phenomenon", warns Colonel Major Younsi, from the port of Sfax, which has largely become a cemetery for seized migrant boats.

The means of Tunisia in its fight against illegal immigration are deteriorating, warns the officer. He adds that his teams are beginning "to have difficulties in maintenance" and calls for "more international cooperation".