Tschentscher wants to “open horizons” as President of the Federal Council

Hamburg's Mayor Peter Tschentscher is the new President of the Bundesrat. 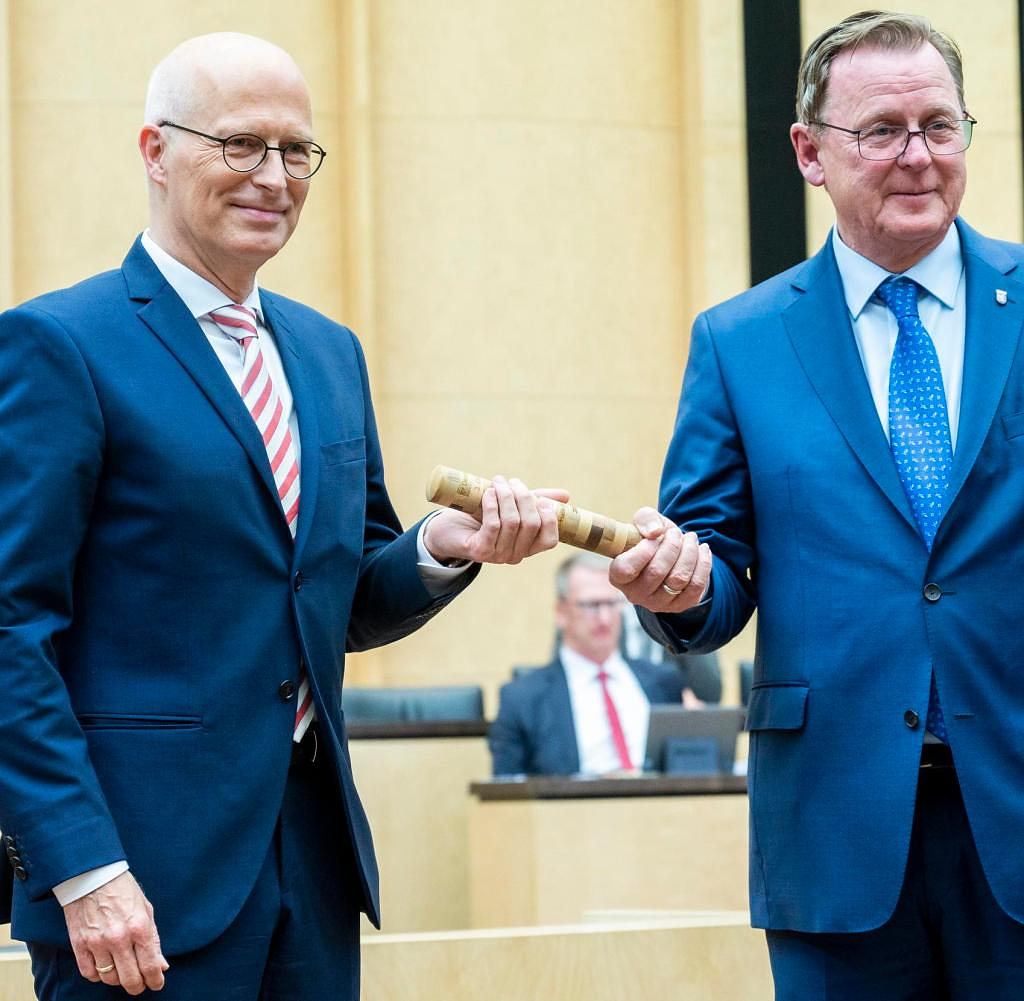 Hamburg's Mayor Peter Tschentscher is the new President of the Bundesrat. The Chamber of States unanimously elected the 56-year-old Social Democrat on Friday. He will replace Thuringia's Prime Minister Bodo Ramelow (left) in this function on November 1st. The Federal Council Presidents are each elected for one year. The traditionally unanimous election follows a fixed order determined by the population of the countries. Ramelow wished his successor Tschentscher "that he would approach the Federal Council presidency with Hamburg's composure and with a broad view of the horizon".

Tschentscher had already said in advance that he wanted to spend his year in office under the motto "Opening horizons". In terms of protocol, the 56-year-old native of Bremen is now the fourth-highest representative of the state, and as early as next week he will also represent Federal President Frank-Walter Steinmeier, who is leaving for official visits to Japan and South Korea on Monday fourth highest representative of the state - behind the Federal President, the President of the Bundestag and the Federal Chancellor.

But first, for Tschentscher, the debate about the entry of the Chinese state shipping company Cosco into the terminal operator HHLA in the Port of Hamburg continues. The sale of shares is "an investment that is customary in the industry in order to create logistical efficiency," said Tschentscher on FGreitag in the phoenix interview. Cosco is involved “in all major European ports”. An increased influence of Chinese interests is not possible and "certainly no strategic influence on Hamburg's port policy". "100 percent of the infrastructure remains in the hands of the city. 100 percent of the operation of the port remains with the city alone," says Tschentscher. He pointed out that the Hamburg shipping company Hapag-Lloyd also owns terminals in North and South America or holds shares.

The federal cabinet had approved a 24.9 percent stake in the terminal operator for the Chinese state-owned company at the instigation of the federal chancellor. Criticism of the entry is "often based on a deep ignorance of how a Hamburg port is organized and how it is operated," said Tschentscher. There was "a lot of dogmatism and political perspectives and little well-founded expertise in play".

‹ ›
Keywords:
LauterbachJörnTschentscherPeterHamburgRamelowBodoBundesratTexttospeechThüringenPeter TschentscherBodo RamelowCoscoAsienDie LinkeSPDMusikBundesratspräsident
Your comment has been forwarded to the administrator for approval.×
Warning! Will constitute a criminal offense, illegal, threatening, offensive, insulting and swearing, derogatory, defamatory, vulgar, pornographic, indecent, personality rights, damaging or similar nature in the nature of all kinds of financial content, legal, criminal and administrative responsibility for the content of the sender member / members are belong.
Related News