Trump hits back at Biden: 'He's the enemy of the state'

In front of his supporters, the Republican billionaire also denounced the spectacular FBI search of his Florida residence on August 8 in Mar-a-Lago, one of "the most shocking abuses of power by an administration in American history". 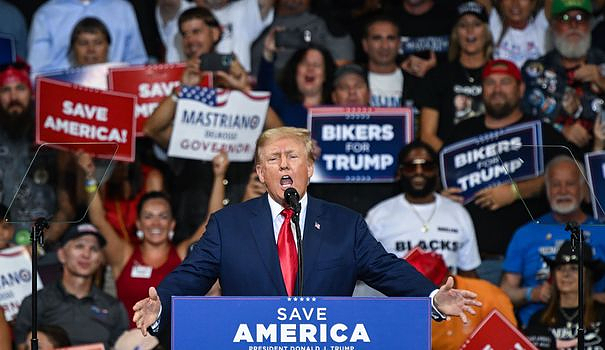 In front of his supporters, the Republican billionaire also denounced the spectacular FBI search of his Florida residence on August 8 in Mar-a-Lago, one of "the most shocking abuses of power by an administration in American history".

"He (Joe Biden), the enemy of the state", attacked Donald Trump in front of the crowd, responding to the virulent attacks of his successor, who accused him two days earlier of representing, with "the republicans MAGA" (Make america great again), "an extremism that threatens the very foundations of our Republic".

"His speech was only hatred and anger", denounced Donald Trump, also seeing in it "the most vicious, hateful and divisive speech ever delivered by an American president".

In his speech delivered Thursday in Philadelphia, cradle of the United States, Joe Biden had called for saving "the soul of America", castigating those who "do not respect the Constitution", "do not believe in the State of right", "do not recognize the will of the people".

During his first public appearance since the spectacular search by the FBI of his Florida residence on August 8 at Mar-a-Lago, Donald Trump also affirmed that this act of investigation constituted "the most striking example of the very threats that weigh on American freedom" and one "of the most shocking abuses of power by any administration in American history".

“The shameful raid and raid on my house in Mar-a-Lago was a travesty of justice,” insisted the former president, who openly flirts with a new candidacy in 2024.

The FBI had carried out this search because it suspects the ex-president of illegally keeping confidential documents from his mandate at the White House (2017-2021).

Federal investigators believe that among the 30 boxes seized are top secret documents "probably hidden" to hinder the investigation, says a document from the Department of Justice.

But for Donald Trump, this "flagrant abuse of the law" will produce "a backlash like no one has ever seen".

The former president also again questioned the result of the 2020 presidential election, which saw him lose to Joe Biden. "American elections should be decided by the American people. And it didn't happen like that in 2020," he said.

The billionaire is also the target of investigations into his efforts to overturn the results of the 2020 presidential election and his role in the assault by his supporters on the Capitol on January 6, 2021.

He is currently not being prosecuted in any case.