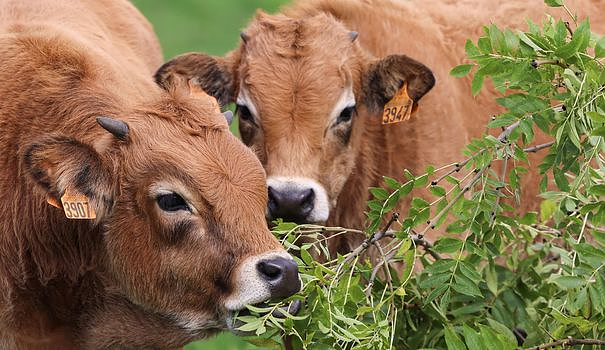 “Ash trees are our drought insurance,” says Christian Bonal, 58. Chainsaw in hand, this cattle breeder, based in Saint-Côme-d'Olt, cut "several hundred" of these trees this year.

"Usually, we cut it in mid-August, but there, from July 15, everyone got started," he adds. The reason: drought. The pastures were yellow this summer, the animals had nothing to eat.

Christian, who has 80 mother cows of the Aubrac breed, and his neighbors have therefore cut the foliage of the ash trees to bring a "little protein and green" to their herds and avoid expenses.

"It's two trucks of hay that we didn't buy", or more than 6,000 euros saved, assesses the operator.

"The leaf replaces the grass and the cows love it. You can give them anything else, they prefer ash," smiles Jean-François Bailleau, 59, another breeder, near the village of Saint-Chély -d'Aubrac.

The proof is: at the noise of the tractor or the chainsaw, the cows gather under the trees and wait for the fall of the branches.

The practice is not new. The rows of ash trees that border the plots of the high plateau were planted by their ancestors "to make leaves", tells AFP Christian Bonal.

"At the time, we cut them with an axe," recalls Marc Rozières, 59. "As a child, our job was to pull the branches" so that the animals did not fight to catch them, and "to make bundles" of leaves for the calves in winter, remembers this neighbor.

This practice provided additional fodder, wood for winter heating, and trees were kept from one year to the next to compensate for the lack of grass in the event of drought.

Ash and other trees were also used elsewhere in France for cattle, sheep or goats.

But the practice was somewhat lost from the 1950s: "farms have grown, we have intensified production and this resource which was not very productive has been neglected", recalls Bernard Miquel, former adviser in in charge of the development of the bocage at the Aveyron Chamber of Agriculture.

It "has only been preserved very marginally", he observes. In Aubrac, rare people such as Christian Bonal have never abandoned it. Others like Jean-François Bailleau, originally from Basse-Normandie, discovered it.

"It was during the drought of 2003 that I started thinking about it" thanks to an employee, explains the breeder who took over the farm from his in-laws in 1995.

Nearly twenty years later, most of the 700 to 1,000 ash trees in his fields have regained the form of a "trunk tree" or "tadpole".

We intervene "every five or ten years to prune the branches at the same level in order to stimulate growth", specifies Ugolin Bourbon Denis, agro-environmental project manager at the Aubrac Natural Park.

This "intervention may appear aggressive", but makes it possible to "strengthen the tree" and "to give it great longevity", he says. She also has "a real interest in the face of global warming": the trees, well rooted, are more resistant to drought.

However, the nutritional value of the foliage varies. If the ash tree has a rich forage, it is threatened by a fungus. The National Institute of Agronomic Research (Inrae) in Lusignan (Vienne) continues to study it, however, along with other species, including alder and white mulberry.

"In Spain and North America, the white mulberry is a species that is widely used for cattle feed" and which has potential in France due to global warming, explains Sandra Novak, research engineer at Inrae .

The interest of fodder trees is multiple: in addition to supplementing food, they constitute reservoirs of biodiversity, provide shade for livestock and crops, promote animal well-being.

However, "it is not a possible solution on a large scale", tempers Hélène Alexandre, beef cattle adviser at the Chamber of Agriculture. The practice is time-consuming and risky for people with no pruning experience. "Every year, she adds, there are accidents."