Tour of Spain: Uran the boldest, Evenepoel in control

In experience, the 35-year-old veteran was stronger than Quentin Pacher (Groupama-FDJ) and Jesus Herrada (Cofidis) in the final hectometres, after a real battle between the breakaways of the day in the final kilometers from the pass of the Monastery of Tentudia. 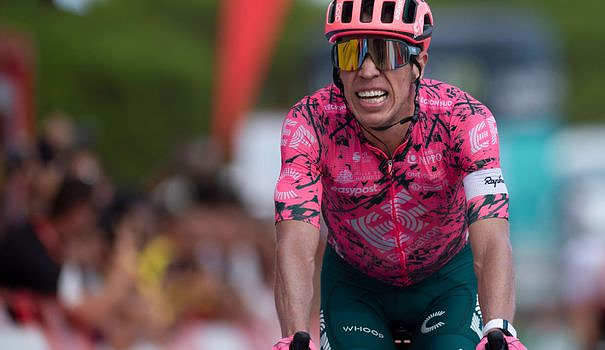 In experience, the 35-year-old veteran was stronger than Quentin Pacher (Groupama-FDJ) and Jesus Herrada (Cofidis) in the final hectometres, after a real battle between the breakaways of the day in the final kilometers from the pass of the Monastery of Tentudia.

"I've been trying to win in this race for years. It's happened to me that I didn't go far in the Vuelta. try and never lose hope", savored Rigoberto Uran, moved at the arrival of the stage on Wednesday.

After two stage victories in the Tour of Italy and one in the Tour de France, the climber has now raised his arms in all the Grand Tours with this first success in the Vuelta.

At the same time, he joined the top 10 of the Spanish loop, in 9th place.

This victory comes to mingle with the frustration of the French rider Quentin Pacher, who will have tried everything in the last kilometer of the climb to finally "die in the wheel of Uran".

Note that three other French people have entered the top 10 of the stage, with Kenny Elissonde (5th), Clément Champoussin (6th) and Elie Gesbert (9th).

The group at the front of thirteen riders took advantage of an Andalusian course "breaking the leg" according to Elie Gesbert, to cross the line five minutes and eleven seconds before the favorites.

Attacked in the final portions by its main competitors, the red jersey Remco Evenepoel (Quick-Step) did not tremble, conceding only nine small seconds on Joao Almeida (UAE), sixth overall at almost seven minutes.

After the abandonment of Primoz Roglic (Jumbo) on Wednesday morning, "the little cannibal" has a two-minute and one-second lead over his new overall runner-up Enric Mas (Movistar) and 4 minutes and 51 seconds over the Spanish hope of 19 years old Juan Ayuso (UAE).

Three new retirements occurred on Wednesday, including the three-time Slovenian title holder, victim of his injuries following his fall in the last hectometres of the 16th stage on Tuesday.

"Primoz had a bad night, with a lot of pain. His mind was really broken. We had a scan this morning which didn't reveal any fractures, but he had bad burns and that combined with his pain, it was impossible to get back on a bike this morning", testified Jumbo coach Addy Engels at the start of the stage.

A news that benefits the 22-year-old Belgian to bring back the red jersey at the end of the Vuelta on Sunday, in Madrid, while only Enric Mas (Movistar) now seems able to tickle him in the general classification.

"The little cannibal" said he was "sad" about the Slovenian's abandonment on Wednesday, specifying however that his Quick-Step team must "stay attentive, because danger can come from anywhere on a Grand Tour".

French Cofidis sprinter Bryan Coquard also threw in the towel, "tired of the last few days" according to his team, while Filippo Conca (Lotto-Soudal) is the 26th to test positive for Covid since leaving Vuelta.

A total of 44 riders have thrown in the towel since the start of the Spanish loop on August 19 from Utrecht, the Netherlands, about a quarter of the peloton.

Thursday, the peloton tackles one of the last mountain stages of the 2022 edition with two first category passes between Trujillo and the Col du Piornal.