Japan is indeed the only G7 country not to recognize same-sex unions, its Constitution providing that “marriage can only take place with the mutual consent of both sexes”. 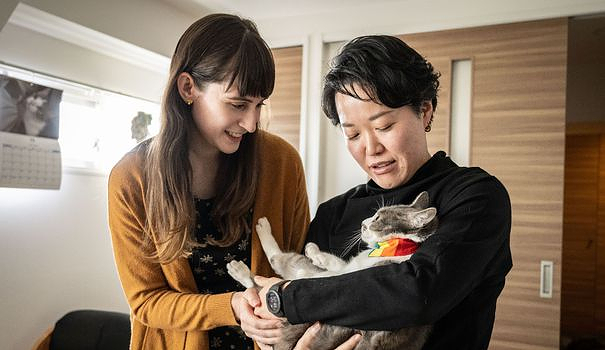 Japan is indeed the only G7 country not to recognize same-sex unions, its Constitution providing that “marriage can only take place with the mutual consent of both sexes”.

The ward hall of Shibuya, a trendy district of Tokyo, was the first in Japan to offer such a certificate, in 2015. More than 200 municipalities or local authorities have since followed.

These certificates are far from conferring the same rights as a legal marriage, but the new status proposed by the Tokyo city hall nevertheless represents progress for Miki and Katie, two women who for a long time had no official certificate of their common life.

"My biggest fear was that we would be treated as if we were strangers to each other in an emergency," Miki, a 36-year-old Japanese woman, told AFP alongside her American girlfriend Katie. , 31 years.

Without a certificate, each used to slip a note into her wallet with the other's contact details. In case...

As of October 28, 137 couples have already applied for a union certificate, Yuriko Koike, the governor of Tokyo, said last week.

Hopes are high that issuing such certificates, which apply to both Tokyo residents and people living in the suburbs but working in the capital, will help tackle anti-LGBTQ discrimination in Japan.

A 2021 poll by state broadcaster NHK showed 57% of respondents were in favor of same-sex marriage, with 37% opposed.

But there is still a long way to go legally. Last June, a court in Osaka (west) dismissed three same-sex couples who had filed a complaint against the state, judging that the non-recognition of gay marriage was not contrary to the Constitution.

Conversely in 2021, a court in Sapporo (north) had found that the current situation violated the right to equality guaranteed by the Constitution.