The Ministry for the Ecological Transition and the Demographic Challenge has granted the works to waterproof the San Clemente Reservoir, Huescar, for a budget amount of 2. 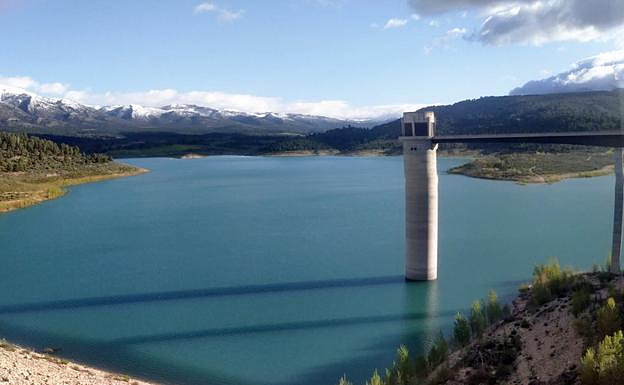 The Ministry for the Ecological Transition and the Demographic Challenge has granted the works to waterproof the San Clemente Reservoir, Huescar, for a budget amount of 2.6 million Euros. This was announced by Pedro Fernandez Penalver, the Government delegate in Andalusia, during a recent visit to the Pantano del Negratin in the Baza area, where similar works are also being done, but on a larger scale.

The Guadalquivir Hydrographic Confederation put the project, which is almost 2.6 million euro, out for tender. It takes 23 months to complete the waterproofing work on San Clemente's left bank, which was inaugurated 30 year ago. Years, specifically by Josep Borrell Fontelles (here High Representative of Union for Foreign Affairs and Security Policy), on April 25, 1992.

It was the inauguration of San Clemente's reservoir that has a capacity of 118 cubic hectometres but has never been fully filled. This made it possible to build the so-called San Clemente Canal. This allowed for consolidation of existing irrigation systems and creation of new ones, until there were nearly 2,000 farmers with 3,500 hectares. Six new irrigation communities were created, including Canal de San Clemente.

Jose Garcia Giralte (Secretary General of the PSOE in Huescar) said that it was a socialist government that Felipe Gonzalez had established the San Clemente reservoir on the Guardal river's bed 30 years ago. Pedro Sanchez is now the president of a socialist government that will finally make the necessary repairs to stop water loss from the San Clemente reservoir.

For three decades, the Huescar City Council has unanimously recognized the need to fix the water leaks at San Clemente Reservoir. The current PP-Cs government team submitted a motion two years ago asking the Guadalquivir Hydrographic Confederation for repairs to the San Clemente reservoir. to distribute the irrigation water to different municipalities.

The motion requested that the service road for the irrigation channel be repaired. It has a length of 35 km and the passage is dangerous and impractical due to its deterioration.

Geological problems with the reservoir are evident in the geological characteristics and floodable basin. Water infiltration phenomena cause significant leaks, which means that the reservoir never reaches its maximum storage capacity. Low rainfall and, above all else, the failure to transfer the Portillo reservoir from Castril in Castril into San Clemente did not help. Due to its environmental impact, a project that required crossing the Sierra de Castril Natural Park was abandoned. The water that was supposed to flow from the Portillo into the San Clemente could no longer be used. Instead, the water from Portillo goes to the Negratin. This is a reservoir for basin regulation to irrigate Guadalquivir below. Except for the small portion that irrigates the Baza region, and the 50 cubic meters that are sent to Almeria via the Negratin-Almazora transfer, the rest of the water goes to Almeria.

‹ ›
Keywords:
GobiernoDestinaMillonesEurosEvitarFugasEmbalseClemente
Your comment has been forwarded to the administrator for approval.×
Warning! Will constitute a criminal offense, illegal, threatening, offensive, insulting and swearing, derogatory, defamatory, vulgar, pornographic, indecent, personality rights, damaging or similar nature in the nature of all kinds of financial content, legal, criminal and administrative responsibility for the content of the sender member / members are belong.
Related News