Russians Igor Girkin and Sergei Dubinsky and Ukrainian Leonid Kharchenko have been found guilty of murder and of having played a role in the downing of a plane. 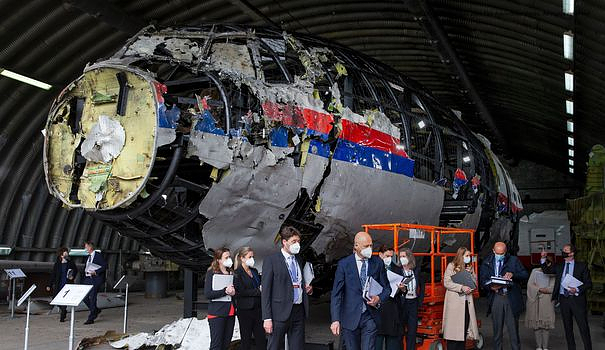 Russians Igor Girkin and Sergei Dubinsky and Ukrainian Leonid Kharchenko have been found guilty of murder and of having played a role in the downing of a plane. They were convicted in absentia because they refused to attend the trial, which lasted two and a half years.

The Russian Oleg Poulatov, the only one to have been represented by a lawyer, was acquitted.

Ukrainian President Volodymyr Zelensky hailed this "important decision". "Punishment for all Russian atrocities - both yesterday and today - will be inevitable," he added.

Russia on Thursday denounced a "political" decision. “The trial in the Netherlands has every chance of becoming one of the most scandalous in the history of legal proceedings,” reacted the Ministry of Foreign Affairs in a press release.

All 298 passengers and crew were killed when the plane from Amsterdam to Kuala Lumpur was hit over pro-Russian separatist-held eastern Ukraine by a BUK missile identified as coming from Russia's Kursk 53rd Anti-Aircraft Missile Brigade, the court heard.

Tears rolled down the cheeks of relatives of the victims who came from all over the world to witness the announcement of this highly anticipated verdict in a highly secure court near Amsterdam-Schiphol airport, from where the Boeing 777 had taken off on July 17, 2014.

“The court qualifies the proven charges as so serious that it considers only the highest possible prison sentence would be appropriate,” said presiding judge Hendrik Steenhuis.

“Imposing these sentences cannot take away the pain and suffering, but hopefully today answers have been provided on who is to blame,” he added.

But none of the suspects were present in court because Russia refused to extradite them.

The trial represents the end of a long quest for justice for the relatives of the victims, who came from 10 countries, including 196 Dutch, 43 Malaysians and 38 Australians.

"Justice has been served. We wanted to know the truth, we wanted justice to be done and it happened in a very balanced verdict", rejoiced Piet Ploeg, who lost his brother, his sister-in-law and his son. nephew.

"The role of Russia has been very clearly confirmed by the Court, and it is at least as important as that of the three convicted," he added to AFP.

The crash of flight MH17 was caused by the firing of a missile from an agricultural field near Pervomayskyi (in eastern Ukraine), killing all passengers, according to the court.

The tragedy sparked global outrage and led to sanctions against Moscow. Ukraine's famous sunflower fields had been littered with bodies and debris, and some victims, including children, were still strapped to their seats.

Judges ruled that Igor Girkin, Sergei Dubinsky and Leonid Kharchenko could be held responsible for transporting the missile from a military base in Russia and deploying it to the launch site, even though they themselves did not support on the trigger.

There was insufficient evidence to show that Oleg Pulatov was involved, they said.

All the suspects were members of an armed group fighting the Ukrainian government, in the service of the Donetsk People's Republic, which the judges said was directly controlled by Russia.

Igor Girkin, 51, a former Russian spy turned defense minister for the breakaway Donetsk People's Republic, was in regular contact with Moscow, including about the missile system, the court heard.

Leonid Kharchenko, 50, who is believed to have led a separatist unit, received direct orders from Sergei Dubinsky, 60, also linked to Russian intelligence, to bring the missile to the launch site.

They apparently intended to shoot down a Ukrainian military plane rather than a civilian plane, but that does not change their guilt, according to the judges.

The fact that Russia has always denied having control of the region at the time of the crash means the defendants could not claim immunity from prosecution as combatants, they added.

The court found that there was "abundant evidence" to determine that the plane had been destroyed by a BUK missile and rejected any other "alternative scenarios" put forward by the defense, in particular a possible involvement of a plane of Ukrainian fighter.

Moscow has denied any involvement in the drama and continues to reject claims that Russia controlled separatist rebels in eastern Ukraine.

Despite the verdict, the case is not closed, observes Dutch police investigator Andy Kraag. “We are looking higher up the chain of command,” he said.

Dutch Prime Minister Mark Rutte called the convictions an "important step" but also said they were "not the end".