After 35 years of not awarding this award, the Chamber of Motril presented its Gold Medals. 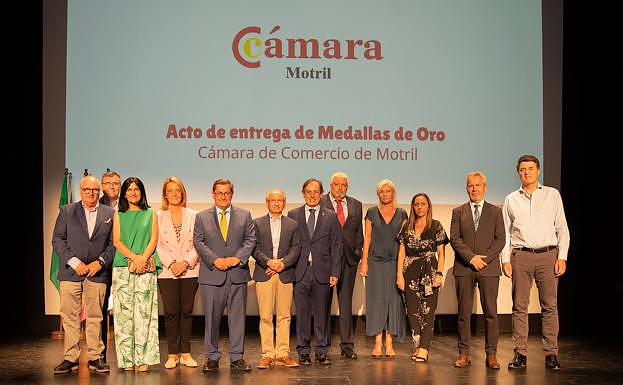 After 35 years of not awarding this award, the Chamber of Motril presented its Gold Medals. For three former presidents, Angel Gijon Diaz, Adrian Picazo, and Francisco Ruiz, the chamber held their Gold Medal Award Ceremony at Calderon Theater.

This event was attended by representatives of the business sector, partners and politicians from various spheres. It also included a historical tour of Motril's Chamber since 1899. The history of the Chamber and its relevance over the past 120 years has been documented.

Julio Rodriguez, President of The Chamber of Motril opened the event by recalling the roles of Francisco Ruiz and Adrian Picazo, as well as Angel Gijon's mandate. We wouldn't be where we are today without the hard work, courage, and determination of all of them. Rodriguez said that Motril is very grateful for the Chamber of Commerce's dedication and commitment. This Chamber plays an important role in economic and business development along the coast.

Jose Entrena, the president of the Provincial Council of Granada highlighted during his speech the courage of Angel, Adrian, and Francisco. These men were driven by convictions and dreamed of the Motril of future and did everything they could to achieve it. Entrena emphasized the power of the Chamber of Motril in launching projects, accelerating improvements, and seeking progress in the coast region.

Luisa Garcia Chamorro, mayor of Motril, presented the diplomas and Gold Medals. She closed the event by thanking the former presidents for their perseverance and the Chamber of Motril for its work, "not just on the Costa Tropical but throughout the province, claiming strength of the entity, and making it known both outside and within the region".

‹ ›
Keywords:
CamaraComercioMotrilEntregaMedallaTresExpresidentesEntidad
Your comment has been forwarded to the administrator for approval.×
Warning! Will constitute a criminal offense, illegal, threatening, offensive, insulting and swearing, derogatory, defamatory, vulgar, pornographic, indecent, personality rights, damaging or similar nature in the nature of all kinds of financial content, legal, criminal and administrative responsibility for the content of the sender member / members are belong.
Related News