"What we liked the most were the waves. 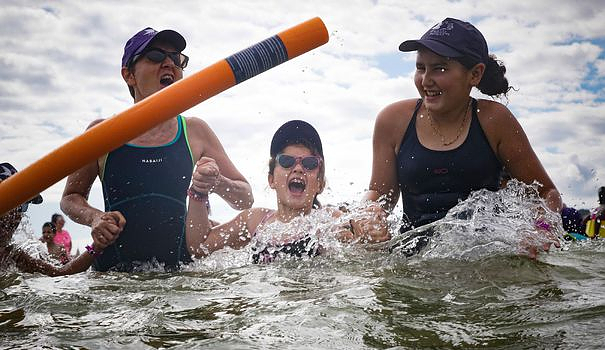 "What we liked the most were the waves. But the sea is salty, it tastes weird in the mouth", explain Sirine, 12, and Liliane, 10, two new friends sitting on the edge of water, busy making a collection of shells that they intend to bring back "as a souvenir".

The most exclusive beach on the Normandy coast resounded on Wednesday morning with the cries of joy of the 3,800 children from the Parisian suburbs, who were enjoying a sun that was also radiant.

If all the children interviewed said they had already seen the sea, many were surprised that it was salty or that the shells in the sand sting their feet, noted an AFP journalist. Others asked their leaders if there were sharks there.

"For us volunteers too, it's a great day. I didn't leave this summer. It's not always easy. With the rise in the price of gas, we do with what we have... And then the children are nice, happy", explains Françoise, retired, one of the thousand volunteers of this day of forgotten holidays (JOV).

The Secours Populaire organizes one each year for young Ile-de-France residents in a Normandy seaside resort.

"Since the consequences of the war in Ukraine, for us, it is very clear", there is "a worsening", declared the secretary general of Secours populaire Henriette Steinberg, questioned by AFP on the evolution of the situation. poverty in France.

“The worsening was very, very clear during the Covid. There was a bit of a stabilization and now there is a further deterioration,” Ms Steinberg added.

"It's extremely strong what is happening," she said.

The "degradation" of the situation concerns "new categories" of the population, detailed Ms. Steinberg, "these are not people who have been in difficulty all their lives. These are people who have worked, with low salaries" .

She also cited the case of farmers' wives who only receive 250 euros per month or women of small traders who closed during the Covid epidemic and "find themselves" today "on the street".

“What also aggravates the situation is the feeling of concern that we are at the start of a downturn,” added Ms. Steinberg.

For the Secours populaire, "we must think about measures which are of a collective nature and not simply individual by individual".

Mrs. Steinberg insisted on the impact of this poverty for children. Some starve themselves so that their parents have something to eat, she testified.

Asked by AFP, the Minister of Solidarity Jean-Christophe Combe, who came to Deauville to "highlight" the JOV, does not make the same observation.

"Today, to my knowledge, there is no massive extension. There is a deterioration in the situation among certain audiences", estimated Mr. Combe who spent nearly two and a half hours in Deauville with the children. then the volunteers.

"As I speak to you, the measures put in place by the government have made it possible to avoid the tipping into poverty of a certain number of households in our country", he added, the government " will be vigilant in the coming months".