Led by the National Salvation Front, a coalition of opposition parties that includes the Islamist-inspired formation Ennahdha, the demonstrators crossed the main streets of the Tunisian capital, calling for the departure of the president. 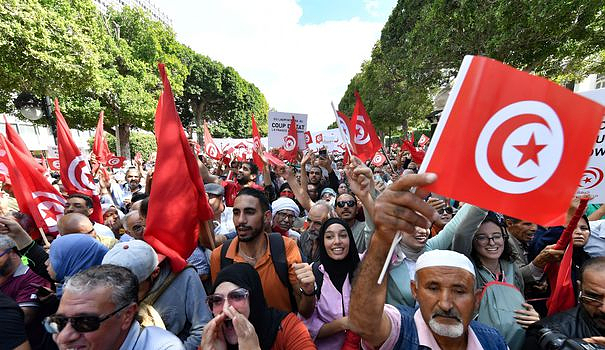 Led by the National Salvation Front, a coalition of opposition parties that includes the Islamist-inspired formation Ennahdha, the demonstrators crossed the main streets of the Tunisian capital, calling for the departure of the president.

"Go away, go away", "Revolt against Kais the dictator", "the people want to dismiss the president", chanted the protesters.

Tunisia, strangled by a debt exceeding 100% of its GDP and unable to borrow on the international markets, is in negotiation with the International Monetary Fund (IMF) for a loan of around two billion dollars.

This financial crisis has resulted in recent months in recurrent shortages of basic products (flour, sugar, coffee, etc.) in a context of galloping inflation (nearly 9% in August over one year).

Tunisia's difficulties, which have been in economic decline for 10 years, have been amplified by the Covid-19 crisis and the war in Ukraine, which has increased the cost of imports of cereals and hydrocarbons on which it is very dependent.

The country has also been mired in a serious political crisis since the coup by President Saied who seized full power in July 2021.

"This demonstration reflects anger at the situation in Tunisia under Kais Saied and calls for his departure," former Prime Minister Ali Laarayedh, vice-president of Ennahdha, told AFP.

"If the current political power persists, there is no future for Tunisia. Poverty, unemployment and despair are on the rise," he added.

At the same time, another demonstration against the deterioration of living conditions also took place on Saturday in Tunis, organized by the Free Destourian Party (PDL), an anti-Islamist opposition formation.

The participants in this demonstration brandished empty baskets in reference to the sharp drop in purchasing power. Souad, a retiree, accuses President Saied of "having done nothing". According to her, the situation has only gotten worse" since she came to power in 2019.