This lighthouse is "the hell of hells"

Its Breton name means harmlessly "The Stone", although it is also known as "The Hell of Hells": Armen lighthouse is in an isolated location in the Atlantic - 24 kilometers from the mainland, where waves of up to 30 meters high break it threaten to be swallowed up by strong winds. 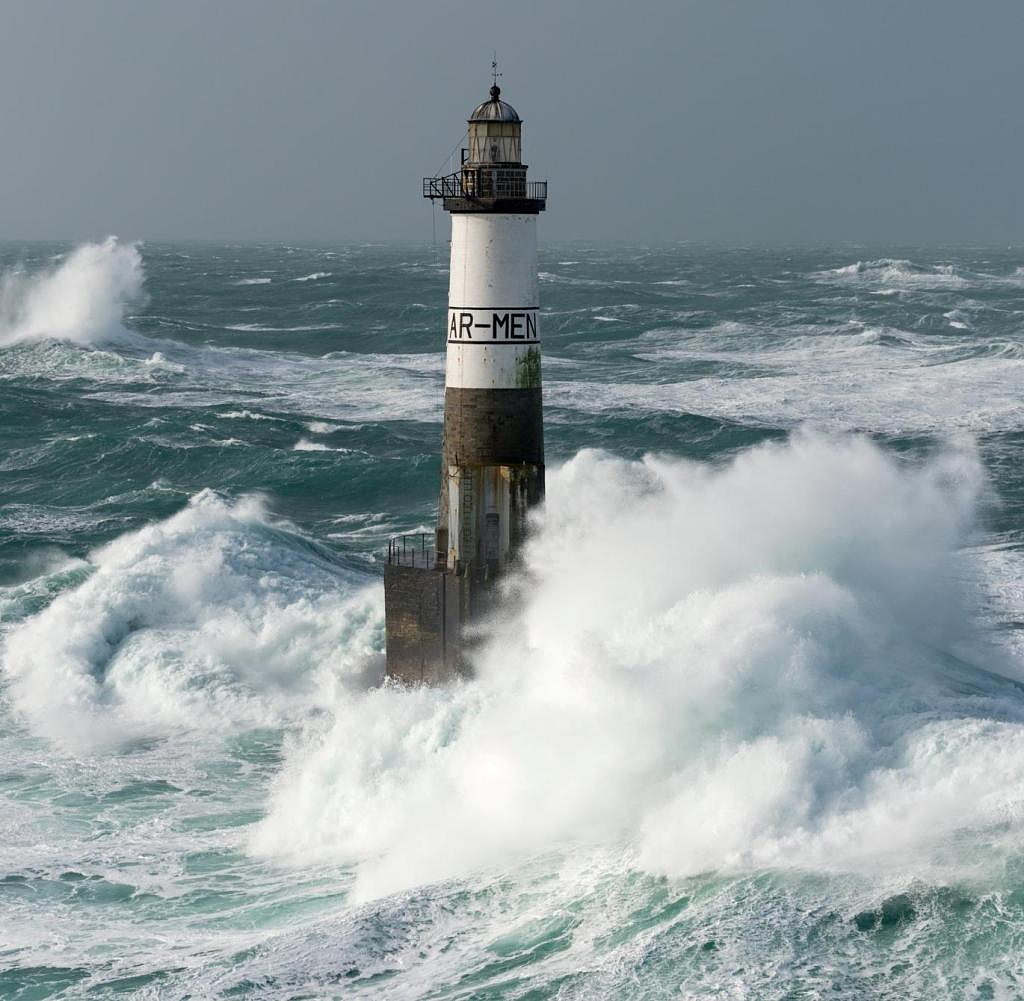 Its Breton name means harmlessly "The Stone", although it is also known as "The Hell of Hells": Armen lighthouse is in an isolated location in the Atlantic - 24 kilometers from the mainland, where waves of up to 30 meters high break it threaten to be swallowed up by strong winds.

Work on arms began in 1867 and took a full 14 years due to the extremely difficult local conditions. Again and again the raging sea kept the two guards captive for weeks.

Initially powered by oil, the beacons have been flashing automatically since 1990 - and Armen is orphaned. In 1967 the experience report by the Breton author J.-P. Abrahams, in which he writes about his meager life as a lighthouse keeper.

Brittany is in the extreme west of France; as the country's largest peninsula, it separates the English Channel from the Bay of Biscay. They were decisively shaped by Celtic tribes, which they called Aremorica - "land by the sea" - and sailed out from here with their fleets.

Today, Brittany is one of the most important tourist regions in the country. It impresses with Atlantic beaches and bathing bays, good food typical of the country and Neolithic cult sites in the form of thousands of menhirs that seem to sprout out of the heathland like giant stone mushrooms.

At the mouth of the Rance river, the historic center of Saint-Malo, surrounded by ramparts, is bathed on three sides by water at high tide. What used to protect the privateer and shipowner stronghold from raids now makes the city a Breton magnet for visitors.

The self-confidence of the inhabitants of Saint-Malo is legendary: Having become very prosperous through trading in goods from Newfoundland and India, they proclaimed their own republic in 1590 - which, however, only lasted four years. But to this day her motto is: "Neither French nor Breton, I'm Malouine!"

Perhaps the most famous Celt is Asterix – the Romans called the early inhabitants of Brittany “Gauls”. The "Asterix" comics have been telling stories about the Gallic village and its inhabitants for 60 years now. In 2009, the town of Erquy made a name for itself as an alleged model for Asterix' hometown, but solid evidence was missing.

At a press conference, Albert-René-Verlag revealed little about the new adventure of little Asterix and his fat friend Obelix. Once again the author Jean-Yves Ferri and the draftsman Didier Conrad are the fathers of "La fille de Vercingétorix".

Bretons love their Epagneul, the red and white spaniel. The Greek poet Oppianus already mentioned in his "Kynogetika" that the dog breed was used for hunting and falconry around 200 AD; in the Middle Ages it is not missing from any painting of hunting parties. Even Rembrandt painted him.

The pointing dog still has a strong passion for hunting and likes to fetch game birds. Therefore, the approximately 50 puppies that are born in Germany each year are only given to hunters and falconers.

Brittany has 4,000 palaces, castles and manor houses. Many of the stately buildings can be visited - for example the 400-year-old castle of Le Rocher-Portail, which is one of the most beautiful in France.

With the claim "Downton Abbey à la Française" the favor is not only advertised to fans of the British series. There are a dozen rooms to visit, from the servants' room to the cabinet of curiosities. The extensive castle park is available for picnics.

When eaten raw, fresh oysters are “an unsurpassable dish in their very natural simplicity,” wrote the “king of cooks” Paul Bocuse in his standard work “The New Kitchen” from 1977. Nothing has changed to this day.

In Brittany, the municipality of Cancale in particular has been known for breeding since the 13th century. Two varieties thrive in the self-proclaimed “oyster capital”: the European oyster and the Pacific rock oyster. It's best to slurp them on the spot.

The Breton proverb "Breton and faith are brothers and sisters in Brittany" refers to the long-dominant Catholicism in the region. Brittany, including the Breton language, was only annexed to France in the 16th century.

The Breton language that British immigrants brought with them from their islands at the time of the Anglo-Saxon conquest survived - to this day. However, with only about 150,000 speakers left, it is considered critically endangered.

In many areas of Brittany, bilingual road signs refer to the heritage. Mini-lesson for Brittany visitors: thank you is "mersi bras".

This article was first published in September 2019.

If you come to Brittany, you should cancel your Weight Watchers membership beforehand. In the extreme north-west of France, lots of flour, sugar and salted butter are part of the culinary must-try.

This text is from WELT AM SONNTAG. We are happy to deliver them to your home on a regular basis.

‹ ›
Keywords:
Länderkunde (Kolumne)WaakAnneFrankreichLänderporträtsBretagneRegionenporträtsLeuchttürmeAusternRpblRrpblLeuchtturm ArmeReiseAtlantikSchloß Frankreich
Your comment has been forwarded to the administrator for approval.×
Warning! Will constitute a criminal offense, illegal, threatening, offensive, insulting and swearing, derogatory, defamatory, vulgar, pornographic, indecent, personality rights, damaging or similar nature in the nature of all kinds of financial content, legal, criminal and administrative responsibility for the content of the sender member / members are belong.
Related News