This is the new La Goleta Park: 7,000 square metres for recreation and sports in the Vega de Aca

The new La Goleta park, located between Camino de La Goleta and Tree of Love, will be called "one of Almeria's great parks", according to Ramon Fernandez-Pacheco, the mayor. 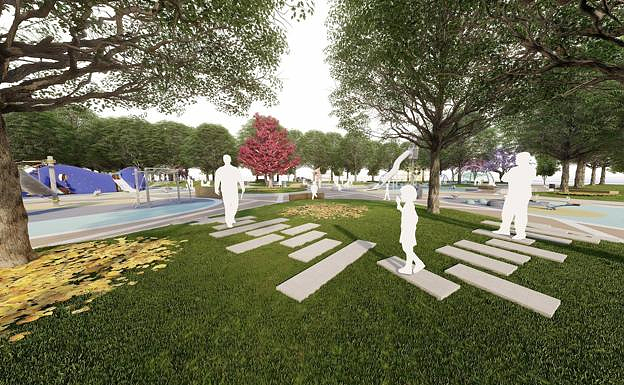 The new La Goleta park, located between Camino de La Goleta and Tree of Love, will be called "one of Almeria's great parks", according to Ramon Fernandez-Pacheco, the mayor. He said that it would be "a benchmark in accessibility and sports, gerontogymnastics, and children’s games." We will have to wait for it to be fully realized. It is currently on paper.

Ana Martinez Labella, the mayor, and the councilor of Urban Planning, presented yesterday in situ the project by Aima architecture. It was executed in two phases with a base budget of nearly three million euros. This will allow you to increase your area for stay, play, and enjoy in the capital.

Fernandez-Pacheco spoke out about the huge transformation the park would bring to the area. It will not only be a boon for the neighborhood, but also the city. The new park covers 7,000m2 and contemplates a complete reorganization. This includes adaptations of children's games, greener surfaces, and other elements that are specific to gerontogimnasia>>.

The first phase of the comprehensive reorganization and adaptation of La Goleta Park, built in 2018, will be completed. It will include the relocation and adaptation of games for children with reduced mobility, and modifications to the pedestrian routes to increase the area's recreational and games areas. The mayor stated that everything will be done, including maintaining trees and multiplying green areas. Additionally, the central axis will be created by the planting of a single large tree in the center of the park.

The City Council has indicated that the first phase will have a budget in excess of 250,000 euros and a seven-month execution time. Alvaro Guil, an architect, stated that the second phase will have a budget of 726.212 euros and four months for execution. It will improve the park's exterior urbanization and perimeter fencing. He also stressed that the project will help to address the problem of access from nearby streets.

This second phase will see the installation of bio- and sports elements as well as equipment for elderly physical exercise. Access to the interior of La Goleta park is possible through four sliding doors on each side.

Presentation of the project at La Goleta Park.

It will also be used for replacing all lights. Surveillance cameras will be pre-installed. Any possibility of rainwater puddles will be resolved with a network scuppers, explained Maria Isabel Andres, engineer.

It is expected that it will be a new space for people to enjoy nature, encounters, and sports. The mayor said that this was "a transforming element in the urban experience in Almeria", and was confident that such spaces "represent a great chance for improvement and development in one of the most promising areas in the city."

‹ ›
Keywords:
NuevoParqueGoleta7000MetrosCuadradosOcioDeporteVega
Your comment has been forwarded to the administrator for approval.×
Warning! Will constitute a criminal offense, illegal, threatening, offensive, insulting and swearing, derogatory, defamatory, vulgar, pornographic, indecent, personality rights, damaging or similar nature in the nature of all kinds of financial content, legal, criminal and administrative responsibility for the content of the sender member / members are belong.
Related News