"This is about dragons, dragons" theater that is based on diversity and equality. 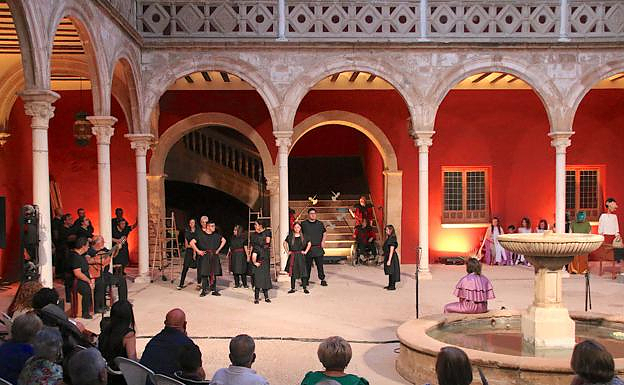 Last Saturday, the 'Ricardo Iniesta’ Municipal Theater School of Ubeda presented "Esto va de dragonas, y dragones" last Saturday, its latest production. It was performed in the Casa de las Torres courtyard. The space was transformed into an enormous open-air stage that could be used for different scenes. It is porticoed but still large enough to accommodate dozens of people. It was, indeed, a very choral piece that involved many people.

The students from the Municipal Theater School were joined by groups from the Occupational Center and the 'Ciudad De Ubeda' Children’s School, who have been working together for a while. Manuel Martinez composed the music and Cristina Garrido Jimenez worked with a large group of seamstresses to create the costumes. Everything related to sound, lighting and production was Tua's responsibility with Paco Vilches in charge.

The public applauded the large team, and took away a moral: a new world can be created if everyone works together. Because the world is theater. There is another way to do theater that is based on truth, equality, diversity and truth.

‹ ›
Keywords:
DragonasDragonesTeatroDiversidadIgualdadVerdad
Your comment has been forwarded to the administrator for approval.×
Warning! Will constitute a criminal offense, illegal, threatening, offensive, insulting and swearing, derogatory, defamatory, vulgar, pornographic, indecent, personality rights, damaging or similar nature in the nature of all kinds of financial content, legal, criminal and administrative responsibility for the content of the sender member / members are belong.
Related News