This artist gets everyone on the net

Fragile aluminum rods unfold in space, are playfully connected with no beginning and no end. 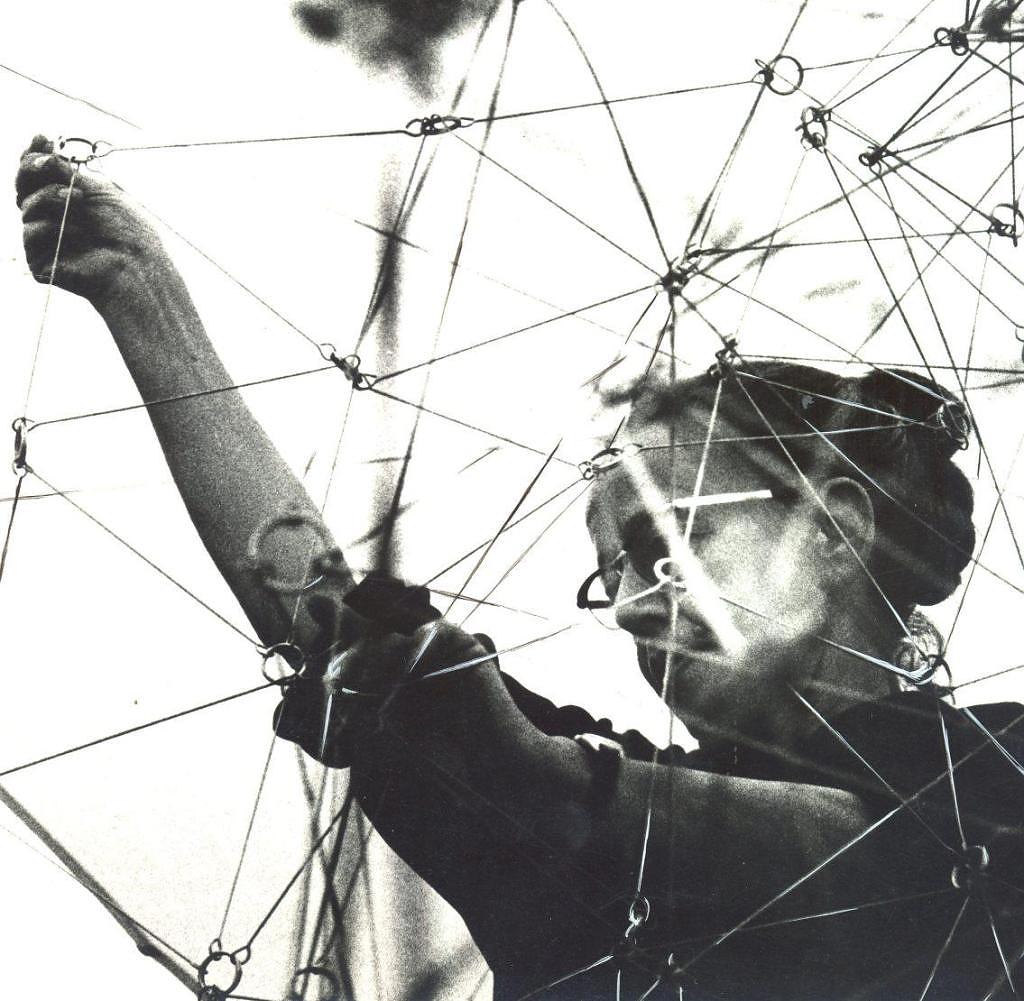 Fragile aluminum rods unfold in space, are playfully connected with no beginning and no end. They seem like stubborn architectural organisms. It is as if hallucinating spiders were at work in these sparkling metallic webs. But they are sculptures by the artist Gego.

The net as a symbol of human relationships, the line as a relationship between points in the air: With this, Gertrud Goldschmidt, who has called herself Gego since childhood, became a pioneer of a new, open, modular concept of sculpture that overcame solidity and solidity in the 1960s. conquered the room and saw something malleable in the void. Metal, a manifestation of mass and power for many sculptors of the time, was for her a light-footed, sovereign drawing in space.

Mikado that has become architecture, with which a small, dainty artist raised the much-vaunted geometric abstraction of Latin America to a new level and transformed the ideas of American Minimal Art into ephemeral, shimmering environments. Her installations and sculptures appear elegant, delicate and dancelike, organic and spiritual, like spirits floating down from the future - and yet they are of such technical finesse that only a trained architect like Gego was able to produce something like this.

LGDR Gallery represents Gego's estate. She is currently showing sculptures and drawings in Paris, which also accompany a comprehensive exhibition at the Jumex Foundation in Mexico and announce the retrospective at New York's Guggenheim Museum (from March 2023). In Hamburg, where Gego joined the Goldschmidt family of banks in 1912

Prices range from $20,000 for Gego's paper works to $3.5 million for larger sculptures, which are hard to come by. Most of the works cost less than a million, which is not much for an artist who, according to her gallery owner Dominique Lévy, is on a par with Eva Hesse and Louise Bourgeois.

"Our goal is to institutionalize Gego's importance for art history," says Lévy in an interview. "The market will then follow of its own accord." The native Swiss is one of the most recognized art dealers of all, historical exhibitions have always been part of her program.

She now runs her gallery not only with her long-term partner Brett Gorvy, who, like her, has relevant auction house experience, but also with Jeanne Greenberg Rohatyn, founder of the Salon 94 gallery and daughter-in-law of New York politician and investment banker Felix Rohatyn. Fourth in the league is Amalia Dayan, granddaughter of former Israeli Defense Minister Moshe Dayan and wife of New York investor, collector and art dealer Adam Lindemann - she previously ran the Luxembourg Gallery

With locations in Paris, New York, London and Hong Kong, LGDR aims to introduce a more flexible gallery structure in an art market increasingly dominated by mega galleries. “We don't believe in exclusive representation of artists, but in a collaborative, project-based model. We fund productions without preventing artists from sharing with other partners,” says Lévy, who employs art experts from Italy to Korea to Taiwan and Shanghai. In addition to curated exhibitions, advice and research are on her agenda, as well as soon a digital library that wants to make pictures and texts available beyond the gallery business.

Dominique Lévy met Gego a few years after her death in 1994. In 2015, she became the first gallery owner in America (after Betty Parsons, who also represented Jackson Pollock and Willem de Kooning) to work with Gego; the Venezuelan government even loaned her the “Chorros” installation with the mandate to restore these delicate webs of metal streaming down from the ceiling. It is quite possible that Gego would revise her statement today that personal memories are not important for her work. Because without her life story it is unthinkable.

Gertrud Goldschmidt was the sixth of seven children. In 1939 she was the last family member to leave the city of Hamburg fleeing the Nazis – she ostentatiously threw the key to the villa into the Alster. She left for England, where her relatives stayed, but was only granted a transit visa. She boarded a cargo ship to Venezuela, without a word of Spanish, but with a diploma from the Technical University of Stuttgart in her pocket: at the time one of the world's best universities for architecture with close ties to engineering.

With her husband, the German entrepreneur Ernst Gunz, she founded an interior design business in Caracas, for which she designed lamps and furniture. The oil boom and immigration brought money into the coffers of a country that invested in its infrastructure - and soon also promoted kinetic art, which, parallel to Concrete Art and Op Art in Brazil, is becoming a national style.

In Caracas, the architect, now a mother of two, designed bars, restaurants and the first nightclub before concentrating on teaching. In 1951 she separated from her husband and fell in love with the graphic artist Gerd Leufert, who became her life partner. He encouraged Gego to devote herself entirely to art, which she had been practicing for a long time in the form of abstract drawings and collages. She traveled Europe and began building small sculptures out of cardboard and wire.

As abstract as her works are, a certain relation to the body is always noticeable. And while geometric abstraction broke into new dimensions in Brazil with Lygia Clark, Hélio Oiticica and Jésus Rafael Soto, in Germany with the Zero Group and in the USA with Agnes Martin and Frank Stella, Gego visited the exhibition of the visionary architect Buckminster Fuller in 1960 in the garden of the New York Museum of Modern Art.

She couldn't let go of its tetrahedron made of aluminum tubes and spherical domes made of triangular structures. Space, emptiness, light, line, series, infinite triangulations and concatenations are what inspire her “Reticulárea”: meshes with modular nodes that conquer space and, so that the shape remains stable, form triangles.

The social dimension, the reference to real life, the sculpture as a place of encounter and interaction shaped her work from then on - at a time when the reception of Maurice Merleau-Ponty's "Phenomenology of Perception" by artists such as Robert Morris, Richard Serra and Eva Hesse made sculpture a medium for direct experience of body and space. This idea that sculpture activates the environment, expands energetically and - which differs from male colleagues - exudes movement, transparency and lightness is what makes her work so lively to this day.

Even the smaller metal sculptures that can be seen at LGDR in Paris, some of which still have something figurative about them, seem to breathe in an eerie way and have a life of their own. As if Buckminster Fuller's geodesic domes had become independent metallic organisms charging rooms like poems.

‹ ›
Keywords:
KunsthandelGego(Bildhauerin)Bildhauerei
Your comment has been forwarded to the administrator for approval.×
Warning! Will constitute a criminal offense, illegal, threatening, offensive, insulting and swearing, derogatory, defamatory, vulgar, pornographic, indecent, personality rights, damaging or similar nature in the nature of all kinds of financial content, legal, criminal and administrative responsibility for the content of the sender member / members are belong.
Related News