When the German troops marched to war against France in 1870, one rumor frightened them above all: the French miracle weapon was the Zouaves, semi-wild soldiers who were implacable towards their opponents. 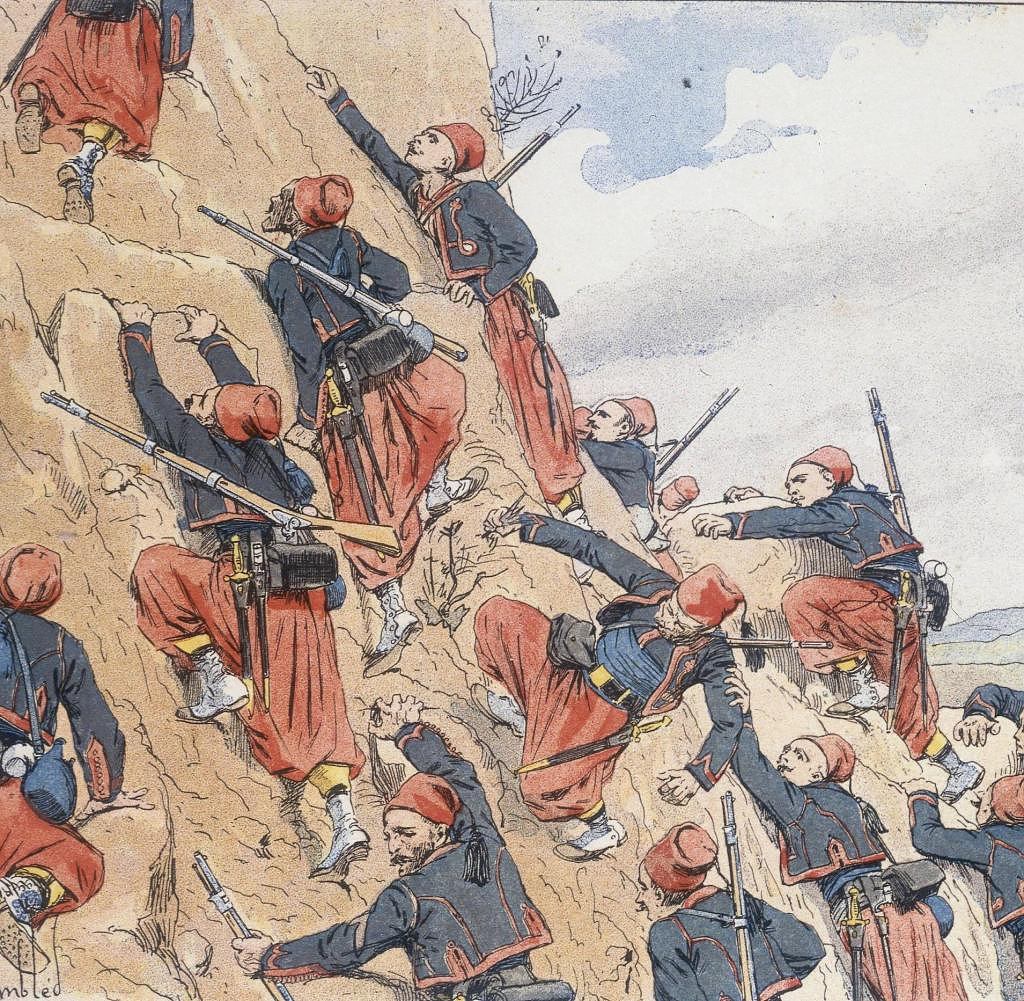 When the German troops marched to war against France in 1870, one rumor frightened them above all: the French miracle weapon was the Zouaves, semi-wild soldiers who were implacable towards their opponents. As the wars in Crimea and Italy proved, they were irresistible and continued to fight even in hopeless situations.

Zouaves therefore played a special role in the articles of the war correspondents who followed the armies. They owed this not least to their colorful uniforms, which gave them an oriental look. Experienced observers made a conscious distinction between Zouaves and the no less exotic-looking Turkos, whose origins also lay in the French colonies in North Africa.

The history of the Zouaves begins with a decree by the French general Bertrand Clausel (1772–1842) of October 1, 1830. The general and later marshal had achieved the feat of making a career in Napoleon Bonaparte’s army and then – albeit temporarily on charges of high treason sentenced to death – to become the first governor of Algeria in the restored Bourbon regime.

Riding into Algiers at the head of the 37,000-strong expeditionary force that began conquering the country in the summer of 1830, Clausel quickly realized that French rule could not be based on European troops alone. A "Corps des Zouaves" was founded in order to win over the powerful Kabyle tribes of the mountains, who had already distinguished themselves as a military reservoir under Ottoman rule.

Since members of other tribes were soon accepted, the name initially referred to a local association, which, however, was led by French officers and non-commissioned officers. In 1831 they were joined by a European force, also recruited from non-French mercenaries: the Foreign Legion. With the help of these units, the Algerian resistance under Clausel's successors was broken by the late 1840s, with their members gaining a reputation for extreme steadfastness but also brutality.

Their prestige as an elite force also made the Zouaves lucrative for Europeans. Above all, French people who lived in Algeria came forward. This changed the character of the unit. While the Zouaves mainly served Europeans, the Turkos were dominated by North Africans. True, their uniforms varied the colors of the French infantry. But style and habit gave both corps an exotic appearance.

Their actions in the Crimean War (1853-1856) made the Zouaves real national heroes. In the fighting at Alma, however, to everyone's astonishment, they put down their packs, swam across the river, and climbed "like monkeys" up the rocks over the far bank. "The Zouaves were so well hidden that a well-trained officer would hardly have been able to spot them with his own eyes," explained one officer. From there they took the Russians under fire.

Her fame eventually persuaded the Papal States to form a similar entity in 1861. From the outset, however, the papal Zouaves were recruited from among young Catholics willing to fight against the militias of the Italian national movement. They had the orientalising uniform in common with their French models. Most of the approximately 4,500 soldiers came from the Netherlands, France, Belgium and francophone Canada. In 1867, at Mantena, they defeated the fighters of Giuseppe Garibaldi alongside the papal army.

In the war against Prussia and her German allies, the French public expected miracles from the Zouaves. In fact, they fought with a determination that many French units lacked in the border battles of August 1870. "The Turkos seemed discouraged, the Zouaves defiant, the infantrymen generally dejected and despondent," noted the famous British war correspondent William Howard Russell after visiting a prison camp. "They showed no mercy towards the Germans," said a German observer. "But as soon as they got into the crowd, they cried out imploringly: 'Pardon'!"

Zouave regiments fought in both of France's World Wars and several of France's colonial wars. It was not until 1963 that their last units were disbanded in the wake of Algerian independence.

‹ ›
Keywords:
OrientalistikKolonialismusFremdenlegion (Geo: Fr)MilitärgeschichteItalienAlgerienKrimGliedmaßeKriegFrankreichReiseZuavenFacebook
Your comment has been forwarded to the administrator for approval.×
Warning! Will constitute a criminal offense, illegal, threatening, offensive, insulting and swearing, derogatory, defamatory, vulgar, pornographic, indecent, personality rights, damaging or similar nature in the nature of all kinds of financial content, legal, criminal and administrative responsibility for the content of the sender member / members are belong.
Related News