They rescue a confused flamingo from Las Salinas, in the Port of Carboneras

The birds that live in this area of Cabo de Gata–Nijar Natural park are being affected by the problem of the Las Salinas channel being broken. 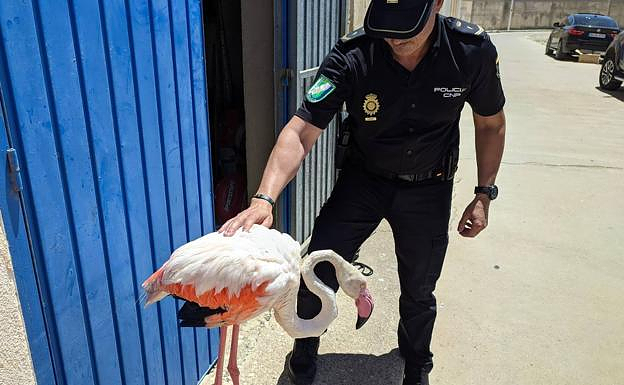 The birds that live in this area of Cabo de Gata–Nijar Natural park are being affected by the problem of the Las Salinas channel being broken. Particularly, this has affected the flamingos as many of these species are not allowed to remain in this area. Its appearance near the Port of Carboneras is proof of this. A specimen was disoriented and showed signs of exhaustion, and had to be saved by the Andalusian National Police Unit.

The 400-meter barrier in the gallery that supplies the sea water to the birds needs to be repaired immediately. This is because the birds are unable to feed themselves, as the Mediterranean Ecologist Group (GEM), warned in a statement. They get their seawater benefits from microplankton and small invertebrates, which they denounced from the environmental group. For its part, the 'Amigos del Parque’ group reported the incident to Prosecutor’s Office for "environmental damages".

After saving this flamingo from Carboneras, agents took it to a veterinarian clinic to assess its health and then returned it to its home: Las Salinas del Cabo de Gata-Nijar Natural Park. The rescuers wished the pink flamingo a speedy recovery on social media. Las Salinas, one of the most significant wetlands in the world, is on the Ramsar List. It is also located in a UNESCO Biosphere Reserve, and is protected at zone A1.

‹ ›
Keywords:
RescatanFlamencoSalinasDesorientadoPuertoCarboneras
Your comment has been forwarded to the administrator for approval.×
Warning! Will constitute a criminal offense, illegal, threatening, offensive, insulting and swearing, derogatory, defamatory, vulgar, pornographic, indecent, personality rights, damaging or similar nature in the nature of all kinds of financial content, legal, criminal and administrative responsibility for the content of the sender member / members are belong.
Related News