These five industrial buildings are worth a trip 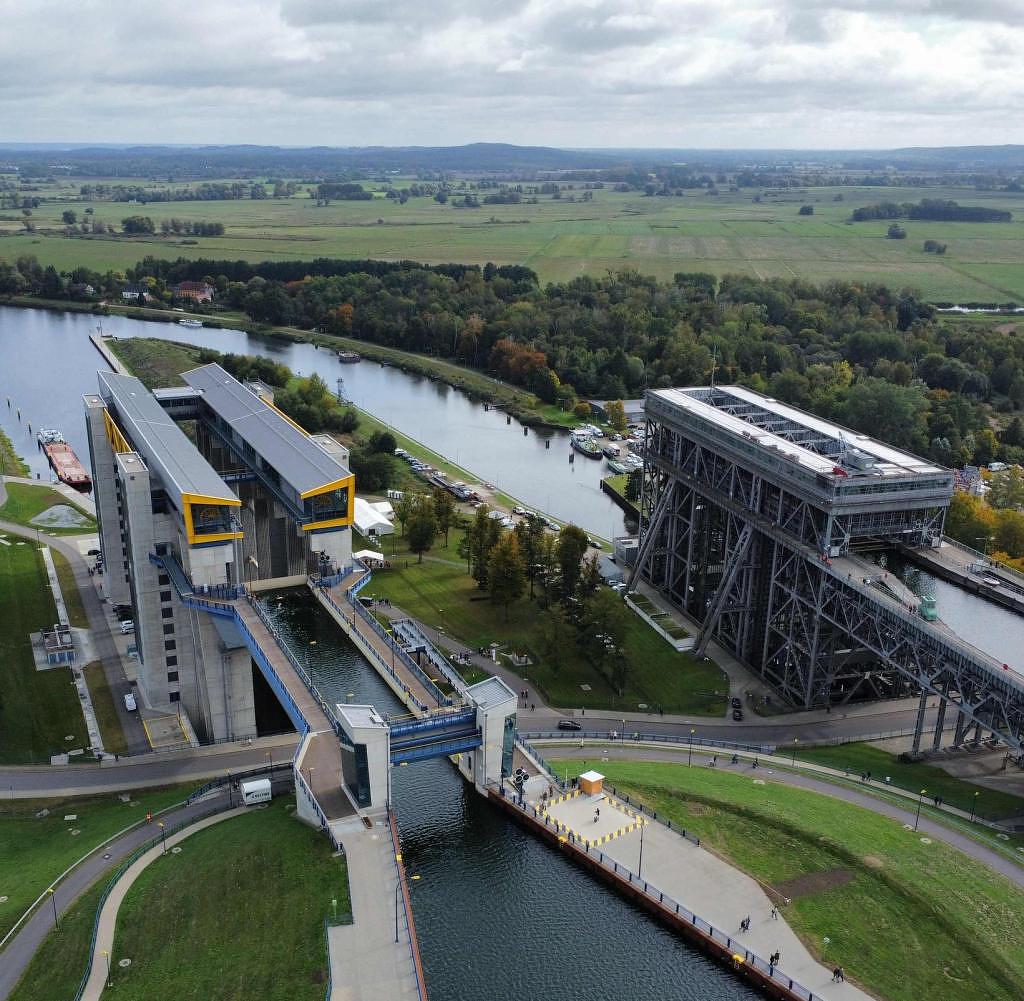 The Niederfinow ship lift is the oldest still functioning cargo ship lift in Germany. It was put into operation in 1934 and is now a protected industrial monument and historical landmark of engineering architecture.

The special thing about it is that in the Niederfinow ship lift, the barges drive their barges into a huge trough filled with water, which - depending on the direction - is lowered or raised by 36 meters, like in an oversized elevator.

The ship lift, 60 kilometers north-east of Berlin, has 150,000 visitors every year. You can attend the spectacle as a spectator or overcome the height difference of the Havel-Oder waterway yourself. Because in addition to professional skippers, tourist passenger ships, motor boats and houseboats can also use the lift.

At the beginning of October 2022, a new ship lift went into operation in the immediate vicinity to make the waterway towards the Baltic Sea future-proof for commercial shipping. The old hoist will remain in operation for the time being, with the priority of transporting pleasure boats and buffering traffic peaks.

You can experience both buildings on a 2.8 kilometer tour. In the winter months there are special tours on fixed dates.

Its span is a good 30 meters and the arch is almost 13 meters high: the Iron Bridge, which spans the longest river in Great Britain in the Severn Valley in the English county of Shropshire, is not a particularly impressive sight. But it is one of the most important symbols of industrialization.

Constructed in 1779 and opened on New Year's Day 1781, the Iron Bridge is the world's first cast iron arch bridge. It was built by the iron producer Abraham Darby III. He owned the blast furnaces in nearby Coalbrookdale, one of the birthplaces of the Industrial Revolution. The more than 1,700 cast parts for the bridge also come from there. The Severn Gorge river valley was renamed Ironbridge Gorge in her honor.

The bridge, which has been closed to traffic for decades, can be visited free of charge, like the former Tollhouse toll booth. Admission is charged for other industrial history attractions such as the Coalbrookdale Museum of Iron.

If you have a soft spot for chocolate, Noisiel should be on your list. In the French town, 30 kilometers east of Paris on the Marne River, the Menier industrial dynasty built a chocolate factory from the middle of the 19th century, the construction and design of which was innovative and trend-setting.

The centerpiece of the facility was the Saulnier Mill of 1872. This is a metal frame construction filled with colored enameled bricks. The building is supported by pillars in the Marne, whose water powers the hydroelectric turbines.

In the Saulnier mill, cocoa beans were ground; the so-called Eiffel Room was used to store chocolate and La Cathédrale was the place where sugar and cocoa were mixed for the chocolate. The latter is a building by Charles Léon Stephen Sauvestre, who worked as an architect on the design of the Eiffel Tower in Paris.

The factory is inextricably linked to Jean-Antoine Brutus Menier, who first produced chocolate bars in Noisiel in 1836; 20 years later, the chocolate bar was produced on site in an industrial way.

Until the beginning of the First World War, the French chocolate factory was the world's largest chocolate factory, which also supplied countless countries outside of Europe. Today, Noisiel serves as the French headquarters of the Nestlé Group. Guided tours of the three historic buildings are organized for groups of at least 15 participants.

Flooding has been a latent threat to Dutch cities for centuries. Danger threatened not only from the North Sea, but also from the huge inland lake Haarlemmermeer. It is true that Holland already looked back on a long tradition of impoldering in the middle of the 19th century. But in order to drain the Haarlemmermeer with its 800 million cubic meters of water, 166 windmill pumps would have been needed to pump the water out of the polders. A mammoth task that was only solved with steam technology.

The forward-thinking King William I (1772–1843) commissioned the three pumping stations Leeghwate, Lynden and Cruquius. While the former have been continuously modernized, Cruquius has been preserved almost in its original state.

It was in operation until 1933, the following year it was one of the first in the world to be declared an industrial monument and has since functioned as a museum where visitors can experience the steam engine with the world's largest cylinder (3.66 meters in diameter) in action.

With each stroke of the steam engine, 8,000 liters of water were pumped into a drainage canal five meters higher. In order to drain the Haarlemmermeer, the three pumping stations ran at full capacity from 1848 to 1852. The Cruquius Museum is accessible by public transport from Amsterdam and Haarlem.

The textile workers' village of Villaggio Crespi d'Adda in the province of Bergamo cannot really be described as a relic of the industrial age, because the place is still inhabited today. What's more: Since 1995, Villaggio Crespi d'Adda has been on the UNESCO World Heritage List as an "extraordinary example of the phenomenon of the working-class town".

Crespi is the name of a family of cotton manufacturers who, in 1878, had a test-tube town built “on the greenfield” near their factory on the banks of the Adda River, where the factory workers and their families were offered everything they needed to live, starting with housing and Vegetable gardens to all necessary services. Only those who worked in the factory could live in the village. Life here was linked to the factory, with its rhythm and demands.

With a school, hospital, hotel, swimming pool and cemetery, Crespi d'Adda, which was planned on the drawing board, was self-sufficient. A Renaissance-style church was also built, a replica of the church in Crespi's hometown of Busto Arsizio.

The industrial family itself resided in a villa, from which there was a separate telephone line to their city residence in Milan. Crespi d'Adda was also the first place in Italy with public electric lighting.

The settlement, whose development was only completed in the 1920s, has remained unchanged over the decades to this day.