These are the new plans for the Sternbrücke

The new construction of the Sternbrücke in Altona is one of the most controversial construction projects in Hamburg. 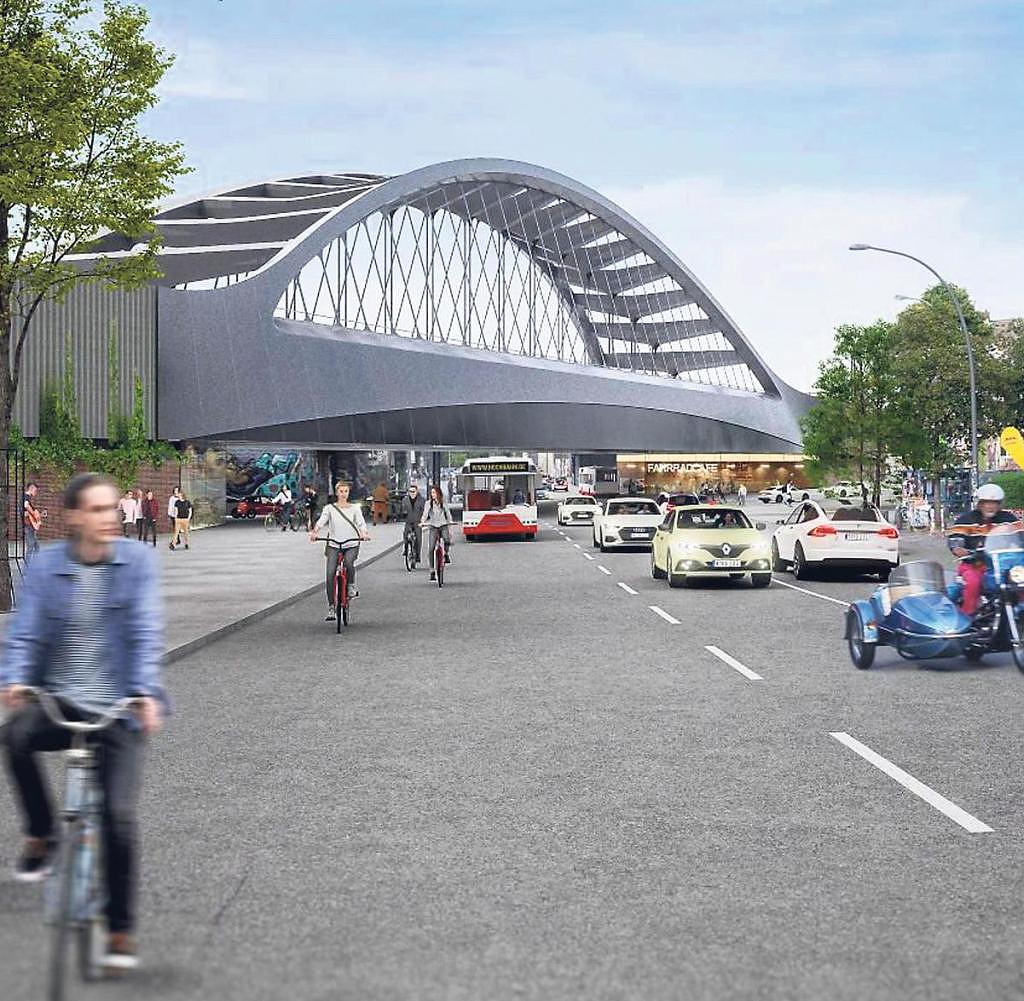 The new construction of the Sternbrücke in Altona is one of the most controversial construction projects in Hamburg. Now there is a new design for the railway bridge that will span Stresemannstrasse and Max-Brauer-Allee. The Deutsche Bahn has the design of the engineering and architecture office Ney

As with the previous designs, the railway relies on a tied arch bridge, which is significantly larger in size and effect than the current steel trough structure of the Sternbrücke. The design envisages a bridge that is 108 meters long, more than 21 meters high and 24 meters wide. Nevertheless, the building in the new designs appears "lighter and more delicate," explained DB project planner Markus Warnken.

The planning office has completely revised the connecting rods below the arches and made them significantly thinner. In addition, the noise protection walls, which were placed on the actual bridge in other designs, were placed close to the tracks and the bridge was thus formed into a unit from the street perspective.

In the evening hours, the outside of the bridge could even be made to shine with a light installation. The architectural office also provided initial ideas for lighting for the underside of the bridge. According to Warnken, he is very convinced that this new design will do justice to the importance of the bridge and the district.

However, it is unlikely that the railway will convince the critics of the building with the new design. Because the revision does not change anything about the biggest points of criticism. Opponents of the project would like to keep the existing and listed Sternbrücke.

The almost 100-year-old building fits better into the cityscape and could be upgraded for many years to come with renovation. The forecasts range up to 50 years that the bridge could still stand in its current form. The railways and the city are assuming significantly shorter times - and have also raised other concerns about the upgrade, such as the question of traffic safety under the bridge, which is still supported today by six steel girders that separate the lanes from each other.

Another argument of the critics is that the casemates under the Sternbrücke and seven other buildings have to be demolished for the new building. There are some clubs and bars there at the moment, which are considered part of the subculture in the district near the Schanze that is worth protecting. An adjacent trailer park and a social project for girls would also be affected. And last but not least, 80 old trees would have to be felled.

Warnken emphasized on Thursday that from Deutsche Bahn's point of view there was no alternative to the new building. "Today's bridge has reached the end of its technical service life." In addition, the requirements for the bridge and the road below are such that no other option than a large tied arch bridge is considered sensible.

With more than 900 S-Bahn, regional and long-distance trains daily, the bridge over the intersection of Stresemannstraße and Max-Brauer-Allee is one of the most frequently used inner-city track sections in Germany. Around 50,000 vehicles pass through the structure below it every day. And in Altona many residential areas are still being developed, Stephan Deys from the traffic authority pointed out.

Today's Sternbrücke is not particularly well made for cyclists or pedestrians. "The situation is not good even for individualized car traffic," said Deys, presenting the latest ideas for the future design under the bridge.

If it were rebuilt as an arch bridge, the supports under the bridge would disappear. That would bring more space, which the authorities now want to use – in contrast to the initial plans – primarily for more bus and bicycle traffic under the bridge. Deys explained that there were considerations, instead of the previously planned four lanes for all traffic, to use one extra-wide lane in each direction exclusively for buses and cycle paths. Cars and trucks would then only have one lane in each direction.

In the coming year, the responsible state office for roads, bridges and water will begin with detailed planning. Also in the coming year, by spring, it is hoped that the railways will have sufficient planning rights and be able to start with the first preparatory work.

Deutsche Bahn is apparently relaxed about a lawsuit, such as the opponents of the project have already announced several times, even if this is not explicitly stated. The first demolition work around the bridge is planned for 2024. The new bridge could be installed in 2026, and the last construction work on the bridge could be completed in 2027.

Originally, the construction costs of the bridge were estimated at 125 million. Project manager Warnken made it clear that this budget could no longer be maintained. "It is not yet possible to foresee where things will lead." However, one can see from many construction projects within the group how these have become more expensive due to the general increase in costs.

‹ ›
Keywords:
HamburgWittegenanntVedderJuliaBrückenDeutsche BahnStadtentwicklungInfrastruktur
Your comment has been forwarded to the administrator for approval.×
Warning! Will constitute a criminal offense, illegal, threatening, offensive, insulting and swearing, derogatory, defamatory, vulgar, pornographic, indecent, personality rights, damaging or similar nature in the nature of all kinds of financial content, legal, criminal and administrative responsibility for the content of the sender member / members are belong.
Related News