The fact that Bangkok is a sea of ​​skyscrapers, temples and street canyons is best revealed from the "Sky Bar". 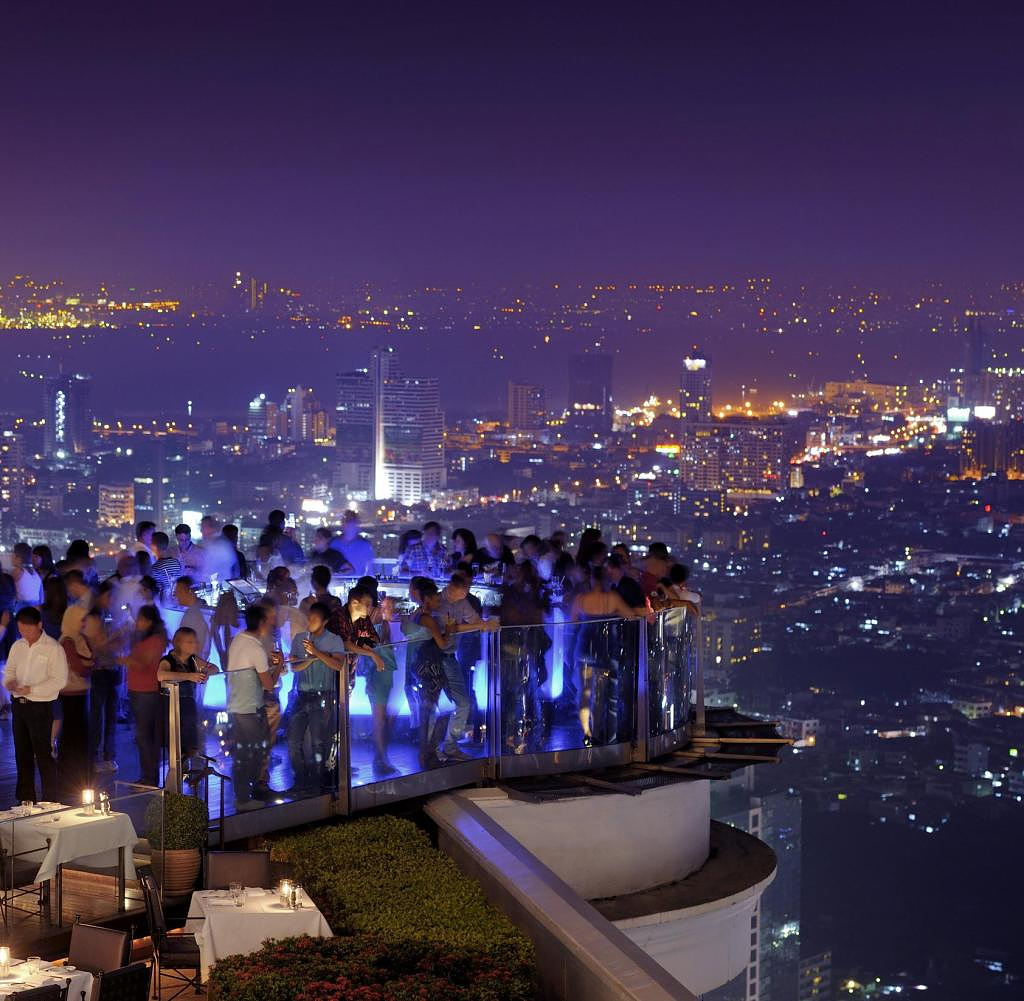 The fact that Bangkok is a sea of ​​skyscrapers, temples and street canyons is best revealed from the "Sky Bar". The open-air location on the 63rd floor of the Lebua State Tower in the Silom district is one of the top addresses in Bangkok's nightlife, not only because of its location at an altitude of 250 meters. Admission is free with a certain dress code (no flip-flops or sportswear), but the prices for the cocktails on the hotel roof are also top-notch - some of them cost well over 30 euros per glass.

Hollywood has even stayed up here to film scenes for The Hangover 2, a commercially successful but mediocre comedy flick.

Whether you're mixing yourself a 'hangovertini', the green tea liqueur, red martini, apple juice, rosemary and honey cocktail named after the film, or another, the backdrop is the UK edition of US magazine Harper's Bazaar. is one of "The World's Best Rooftop Bars", almost irrelevant. If you're hungry, go a few steps down to the "Sirocco", which advertises itself as the highest open-air restaurant in the world - and uses that as justification for a similarly high price level. (lebua.com/restaurants/sky/)

Until ten years ago, despite Brooklyn Bridge and Coney Island, Brooklyn was a little known country in terms of tourism. It was a trip once in a while, but overnight guests seldom attracted New York's second-largest borough. There were hardly any hotels that made a difference.

That changed in 2012 with the “White Hotel”, followed by a series of luxury hotels. Among them in the hip district of Willamsburg in 2016 "The William Vale" with the glamorous bar "Westlight" on the 22nd floor. When the streets of Manhattan - with a good view from up there - have long since disappeared into the shadow of the skyscrapers, you can sit down on one of the 100 outdoor seats on the terrace for a sundowner and enjoy the last rays of sunshine. Telescopes are ready.

Inspired by street food from around the world, chefs Andrew Carmellini and Anthony Ricco dish up octopus skewers or tempura bass buns, accompanied by coordinating cocktails. New York has a wealth of rooftop bars, the “Westlight” is one of the hippest, and you should make reservations, especially on weekends. And if you check in as a hotel guest, you can also have the view while swimming: in the rooftop pool. (westlightnyc.com)

At up to 1850 meters they are not particularly high, but they are one of the oldest mountain ranges on earth: the Magaliesberge folded up around two billion years ago, today there are two nature reserves here.

Thanks to the 360-degree view from Africa's highest rooftop bar "Alto 234" on the continent's highest skyscraper in the financial metropolis Sandton in the metropolitan area of ​​Johannesburg, you can not only see the peaks. The view of the metropolis is also unique from a height of 234 meters - and is only surpassed from on board one of the planes that you can fly from the bar when taking off from the nearby O.R. Tambo International Airport can be observed.

Poor and rich are close together. The operators of the "Alto234" bar on the roof of the skyscraper "The Leonardo", which was completed in 2019, offer champagne, a wine list not only peppered with South African wines from the Cape Wine Country and fine tapas, Sandton is one of the most prosperous areas in all of Africa.

Alexandra, township and the poorest district in the Johannesburg area, is not far away. Nelson Mandela, South Africa's first black president at the end of apartheid, lived here. You can see his former home well from the "Alto234". Admission to the bar with 100 seats costs the equivalent of 17.50 euros. (alto234.co.za)

Since 1889, Paris has been crowned by 330 meters of iron framework, artfully forged together to form the Eiffel Tower and the symbol of the French capital. The marketing potential of the tower is immense, which is also demonstrated by the Hotel "Terrass" in the middle of the artists' quarter of Montmartre. It advertises the view of the steel icon from the city's highest hill, which is an excellent backdrop for one or two aperitifs.

It's correspondingly relaxed on the roof of the hotel on the seventh floor, where you can relax on sun loungers and the tables are made of pallets. DJs often play, and should the weather turn out to be uncomfortable, the terrace can be covered and heated in winter.

You don't have to reserve for a visit, the cocktail prices start at 15 euros, those of the non-alcoholic mocktails at 10 euros. Finger food is served - from cheese platters to mackerel ceviche.(terrass-hotel.com/bar-rooftop)

Buy an NFT to go with the drink? One of those digital certificates of authenticity, also known as non-fungible tokens, that are stirring up the art and crypto worlds alike? In the new "NFT Skybar" on the 47th floor of the "Nhow Hotel", which opened in Frankfurt/Main in August, and was designed by the Spanish architects Rafael de La-Hoz, this will be the highlight.

For each of the ten cocktails specially created for the rooftop bar (from 18 euros) - including a martini gin with vermouth, olive and asparagus distillate - there is a matching QR code that guests can use to purchase the crypto tokens via smartphone. As this is a pilot project, the number of certificates is initially limited to 30. The rooftop establishment with a surrounding terrace is scheduled to open this fall.

A pleasure, even without any digital or alcoholic aids, is the view of Frankfurt and the Taunus from a height of 185 meters, which, according to the operators, makes the "Skybar" the highest terrace bar in Germany. There is space for 199 guests, 40 seats in the covered restaurant, which focuses on Californian cuisine - for example chowder or sea bass ceviche. The NFT Skybar

Sitting is forbidden - this has been the case for the world-famous Spanish Steps in Rome since 2019. Purpose of the measure: the world-famous building is to be protected from the effects of mass tourism. Climbing the marble steps, you'll see the Trinita dei Monti church at the top, another magnet for tourists.

In the immediate vicinity on the two-storey roof terrace on the sixth and seventh floors of the Hotel de la Ville, you can sit down and relax with the finest panorama - for lunch, an aperitivo or with live music in the evening. From one of the highest points in Rome you have a full view of the face of the Eternal City, of course also the famous staircase, on which you are not allowed to sit, and the Via Condotti with its posh boutiques.

At lunchtime, light dishes from the hotel restaurant "Mosaico" are served, where starred chef Fulvio Pierangelini works. In the evening the kitchen oscillates between Italian and Asian. The cocktail prices start at 25 euros, the dress code is elegant. The height of the terrace? Unknown even to the operators - not so important.

“Cielo” offers space for 140 guests, including external ones, between potted olive trees and red and white parasols. The name means "sky" - you can also enjoy the sunset here.(roccofortehotels.com/hotels-and-resorts/hotel-de-la-ville/dining/cielo/)

Despite its name, which translated means aviary: you don't want to lure weird birds to the "Aviary" bar on Finsbury Square, in central London. Strict rules apply: Anyone who comes in sportswear is denied access to the roof terrace on the tenth floor of the five-star hotel "The Montcalm" in the Royal London House. You have to be smartly dressed.

Another requirement is the binding booking of a time slot, for which you have to enter your credit card details. Depending on their age, children are only welcome until 6 p.m., and the terrace closes at 10 p.m. in the evening, following the old British curfew.

On the other hand, you can have breakfast here from 6.30 a.m., and there is a fine feature that should keep guests in a good mood even in typically British rainy weather: glass igloos furnished with sofas, carpets and chaise longues, which are an alternative to the less intimate, albeit less intimate will reopen in October in the elegantly furnished indoor area. Of course, the best view of the London skyline with its glass skyscrapers is from the fresh air area.

The in-house cocktail creations are called “Crouching Tiger” (mixed with mescal and yuzu puree) or “Mother Nature” (with vodka, rhubarb and chamomile syrup). The menu ranges from oysters to steaks. Cash is not welcome here, you can only pay by card. (aviarylondon.com)