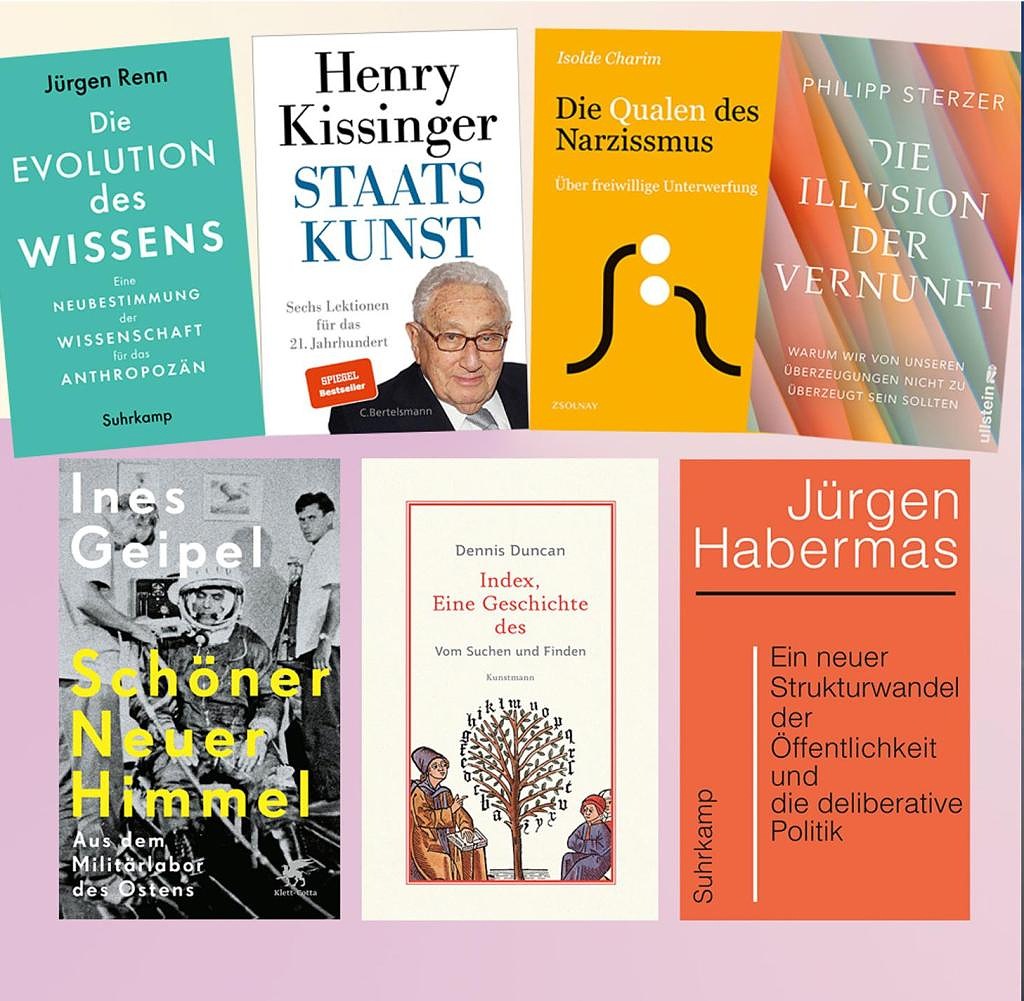 The recommendation list with the greatest distribution in the German-speaking area appears here every month. Media partners are "Literarische Welt", RBB Kultur, "NZZ" and Radio Österreich 1. Experts choose ten non-fiction books of the month from the humanities, natural sciences, social sciences and economics. Worthwhile in October:

In 1962, "Structural Change in the Public Sphere" was published, Jürgen Habermas' first book. At that time it was about the prerequisite for modern democracies: the development of a bourgeois public sphere as a result of book printing and the Enlightenment. Habermas now asks what today's digital media world does with the concept of the classic public sphere.

The evolution of knowledge. A redefinition of science for the Anthropocene. Translated by Sven Scheer. Suhrkamp, ​​1072 pages, 46 euros

Renn is Director of the Max Planck Institute for the History of Science in Berlin. In sixteen chapters it leads from the invention of writing through industrialization to digitization. Renn shows how all inventions have made their mark on the planet.

In his book "Radical Universalism" Boehm wants to continue Kant's idea of ​​universalism and claim for an overcoming of all identity politics. Boehm is an Israeli-German philosopher and teaches as a professor in New York.

The Torments of Narcissism. About voluntary submission. Zsolnay, 220 pages, 24 euros

The Austrian publicist takes a critical look at today's increasingly socially acceptable narcissism. She asks: What does it mean for a society when this anti-social principle becomes the dominant ideology?

This volume of lecture notes is part of a 20-volume work edition by Oskar Negt, who studied with Horkheimer and Adorno and later became a professor of sociology in Hanover. The current volume is dedicated to the subject of politics and aesthetics, using the example of Romantic authors such as Novalis and E.T.A. Hoffman.

Index, a history of... Of searching and finding. Translated by Ursel Schaefer. Kunstmann, 372 pages, 30 euros

The centuries-old success story of the book medium includes paratextual aids such as a table of contents and an index. In his essayistic study, Duncan, a lecturer at University College London, presents the great cultural technique of the register, which has not yet become obsolete even in the age of digital full-text searches.

The Illusion of Reason. Why we shouldn't be too confident in our beliefs. Ullstein, 318 pages, 23.99 euros

Aren't we all a little crazy? This volume promises the latest in brain research and psychology and deals with irrational human behavior. Sterzer is Professor of Psychiatry and Neurosciences at the Charité Berlin.

Half of humanity lives in big cities. The historian Ben Wilson describes what characterizes metropolises from prehistory to the present day.

Konrad Adenauer and Charles de Gaulle, Richard Nixon and Anwar el-Sadat, Lee Kuan Yew and Margaret Thatcher: Using the example of six state leaders to whom he was personally connected, the ex-US Secretary of State discusses how courage comes from the interplay of strategy and character political leadership grows.

Beautiful new heaven. From the military laboratory of the east. Klett-Cotta, 288 pages, 22 euros

Ines Geipel, former competitive athlete in the GDR, sheds light on space research in the Eastern Bloc and her experiments on the human body.

In addition to the jury, a guest presents their non-fiction book of the month every month. This time, Karin Schmidt-Friderichs (Head of the German Book Trade Association) recommends:

“Nils Melzer approaches the case of Julian Assange as a legal scholar: analytically, logically, from a distance. First of all, that is important with a person and a case, which for many – I confess, also for me – are associated with a lot of emotions. Melzer precisely describes the almost unbelievable case of an investigative journalist who uncovers war crimes committed by the USA - and thereby becomes the victim of a judiciary whose understanding of jurisdiction we should question. You could read this book as a crime thriller. But it is non-fiction. And the matter is serious. Julian Assange has been held in Belmarsh High Security Prison in London since 2019. The High Court will soon make a final decision on his extradition to the United States.

In this case, it's not just about Julian Assange as a person, but about one of our greatest assets: freedom of speech and freedom of the press. That is what makes reading Melzer's book so valuable, even if one can accuse him of losing his analytical distance as he dealt with the Assange case. Sometimes you need a clear point of view!” (Karin Schmidt-Fridrichs)