"There can only be one solution: Don't let Putin win. Point."

The Russian army is stepping up its airstrikes on Ukraine and there is heavy fighting in the east of the country. 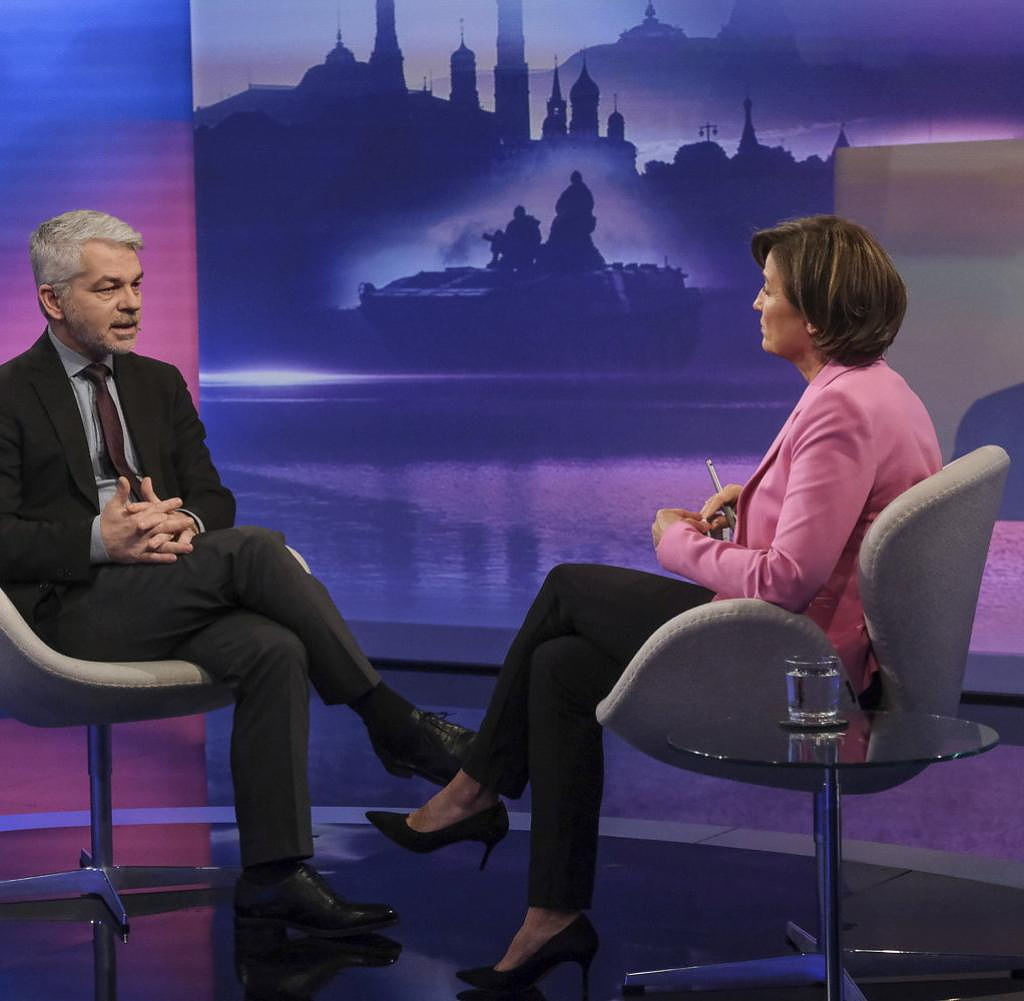 The Russian army is stepping up its airstrikes on Ukraine and there is heavy fighting in the east of the country. But Ukraine is holding its ground. Does Ukraine have a chance of a military victory? "I think the decisive role in the war is now played by the USA, the European Union and the other Western countries," said former Russian diplomat Boris Bondarev on Wednesday evening in the ARD talk with Sandra Maischberger.

"Only with the help of the West can Ukraine win the war even on the battlefield," said Bondarev, who was broadcast live on the political program from a secret location in Switzerland. He has been there with his family since he resigned from the Russian civil service in May for not supporting Putin's war of aggression.

Bondarev spoke to Maischberger about his assessment of the course of the war and appealed to the West: "It is not the war of the Russians against the Ukrainian people. It's Putin's war against you. Against the Germans, French, Italians, Americans, all western peoples.”

The Russian, who worked for the Russian Foreign Office for 20 years, is therefore certain: "There can only be one solution: Don't allow Putin to win the war. Point."

Military expert Carlo Masala basically agreed with the ex-diplomat in the studio, but added: "I always thought it was unlikely that the Russians would be expelled militarily." "Then they can come to the negotiating table without any preconditions."

However, Russia is currently trying to increase the pressure on Ukraine and the European states. On the one hand, the Ukrainian citizens would be worn down by the airstrikes, on the other hand, a new wave of war refugees should be generated, who should burden the EU states. Russia's strategy is to "bomb Ukraine back to the Stone Age," Masala said.

"The longer this war lasts and the greater the economic damage to our economies, the more the West's approval will crumble," predicted the Professor of International Politics at the Bundeswehr University in Munich.

Masala went on to say: "For the first time in Germany we are in a situation in which no majority of Germans support the current policy with a view to the war, but rather want more diplomacy."

Less than 50 percent of Germans would now only support arms deliveries, said Masala. A mistake for the scientist, who demands more “unpredictability” from NATO when threatening weapons – such as short-range missiles with a range of 300 kilometers. The dwindling approval of the Germans is a first indication "that we could get into troubled waters this winter or next spring".

Ex-diplomat Bondarev described Putin as the "leader of a wolf pack" and confirmed the statement by regime critic Alexei Navalny that the Kremlin bears a resemblance to the mafia. "Yes, there is a lot of truth in the comparison."

It is not clear who has what political power in Russia. “People think that Putin decides everything. But there are a lot of people who have access to Putin and also advise him. But we don't even know about them," said Bondarev in Russian according to the official translation.

“The state system is totally non-transparent and corrupt. And a lot of information is mixed with propaganda.” As the “leader of a wolf pack”, Putin cannot afford to lose the war, said Bondarev.

Masala agreed: “Putin cannot afford to lose the war. On the other hand, he no longer has any chance of winning him over militarily.”

The second major topic at Maischberger was Iran. People have been protesting there against the government since mid-September. She reacted with all severity: more than 300 people are said to have died in the protests so far. In an interview, the German-Iranian journalist Gilda Sahebi explained that the Iranian national team's decision not to sing the national anthem before their first game at the World Cup in Qatar "didn't go down well with the Iranians".

That made Sandra Maischberger ask, after all, the action was pretty well received by the Germans. "I understand the German perspective," said Sahebi. In Iran, however, they are further along. "People there take to the streets every day, although they could be arrested or die." The team also met with President Ebrahim Raisi a few days before the World Cup. "Many Iranians took it amiss," said Sahebi. "You expected them to do more."

In Iran, the government is attacking the population with the army and weapons of war, says the political scientist, who fled the capital Tehran with her family in the 1980s. "The Internet has now been throttled and in Kurdistan the Internet is completely switched off." She is very concerned about what is happening in the Kurdistan region, "because we just don't notice anything anymore."

People have been taking to the streets for nine weeks now. Is this the beginning of a revolution in Iran? "I think people are fighting for something right now. For their freedom, for gender equality.” In the private sphere, there have always been celebrations and get-togethers like in the cultural West – it wasn’t allowed to be public. “But now people want to live it.” And accept dying for it.

‹ ›
Keywords:
MaischbergerSandraRusslandUkraineKrieg (24.2.2022)NewsteamMasalaCarloIran
Your comment has been forwarded to the administrator for approval.×
Warning! Will constitute a criminal offense, illegal, threatening, offensive, insulting and swearing, derogatory, defamatory, vulgar, pornographic, indecent, personality rights, damaging or similar nature in the nature of all kinds of financial content, legal, criminal and administrative responsibility for the content of the sender member / members are belong.
Related News