Tons of clothes litter the arid hillsides surrounding the municipality of Alto Hospicio, in the Tarapaca region, some 1,800 km north of Santiago. 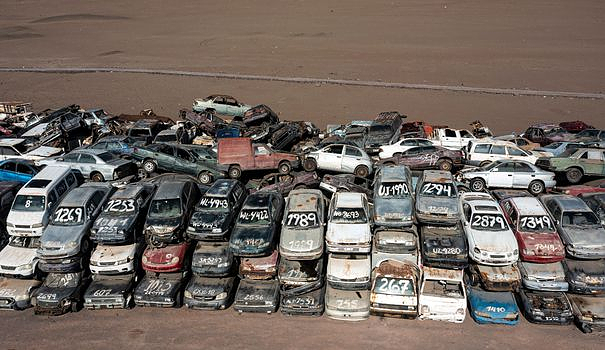 Tons of clothes litter the arid hillsides surrounding the municipality of Alto Hospicio, in the Tarapaca region, some 1,800 km north of Santiago.

In the neighboring city of Iquique, thousands of dismantled cars from the United States, Japan or Korea pile up, while in other areas of this desert of more than 100,000 km2, the landscape is disfigured by hundreds of tires.

Chile has specialized for more than forty years in the second-hand clothing trade, between clothes thrown away by consumers, destocking and charitable works from all over the world.

According to Chilean customs, in 2021, some 46,285 tons of used clothing entered the country.

Clothes, like cars, enter through the free zone in the port of Iquique. They are intended for the Chilean second-hand market or that of other Latin American countries.

Most cars are re-exported to Peru, Bolivia or Paraguay. However, many end up in the streets of Iquique or on the sides of the surrounding hills.

More than half of the clothes and shoes produced, at low cost and on the chain, mainly in Asia, end up scattered in the desert because of the congestion of the circuit.

Regularly, these wild dumps are set on fire in order to reduce the nuisances, however causing thick clouds of toxic smoke.

"These fires are very toxic, because what emanates from them is burnt plastic," said Paulín Silva, a lawyer who in March filed a complaint against the Chilean state with a court dedicated to environmental issues. .

Originally from Iquique, Me Silva denounces in particular the passivity of the State in the face of these landfills which, she assures, constitute "an environmental risk" and "a danger for human health".

"It's the unscrupulous people from all over the world who come to dump their waste here", plague with AFP Patricio Ferreira, the mayor of Alto Hospicio, one of the poorest cities in Chile.

“We cleaned up once and they are polluting us in another area,” he complains, saying he is helpless in the face of the problem. "We feel abandoned. We feel that our land is being sacrificed," he says indignantly.

Although considered one of the driest deserts in the world - with rainfall that does not reach 20 millimeters per year in some areas - the Atacama is home to a unique ecosystem.

In its driest part, near the coastal town of Antofagasta, scientists, including Chilean biologist Cristina Dorador, have discovered extreme forms of life: microorganisms capable of living almost without water or nutrients despite solar radiation. extreme.

These micro-organisms could hold the secrets of evolution and survival on earth, but also on other planets, they believe.

In some areas near the coast, the mist allows vegetation and vertebrate animals to develop, explains Pablo Guerrero, professor of botany at the University of Concepcion, and researcher at the Institute of Ecology and Biodiversity (IEB ).

"The existence of life in these places is, in a way, a fortuitous event", he indicates, considering that this is a region where the ecosystem is "very fragile". "Any change or decrease in the precipitation and haze regime immediately has consequences for the species that live there".

Dozens of purple-dominant flower species bloom when rainfall is above average. Their seeds, buried under the sand, can survive for decades while waiting for a minimum of water to germinate and then flower.

Due to climate change, but also to pollution and the advance of cities, certain species of cacti have however disappeared.

"There are cacti species that are considered extinct. Unfortunately, this is a phenomenon that we see on a large scale and with systematic deterioration in recent years," says Guerrero.

The vast majority of people see the Atacama Desert as simple "bare hills" where the "place of mining operations", regrets Carmen Serrano, president of the environmental organization "Raices Endémicas".

This vast expanse, sometimes rocky, sometimes sandy, is home to the largest copper mines in the world, as well as lithium mines, two activities that consume a lot of groundwater.