On Wednesday, the Ukrainian governor of the Lugansk region (east), hitherto under almost total control of Moscow, claimed a breakthrough. 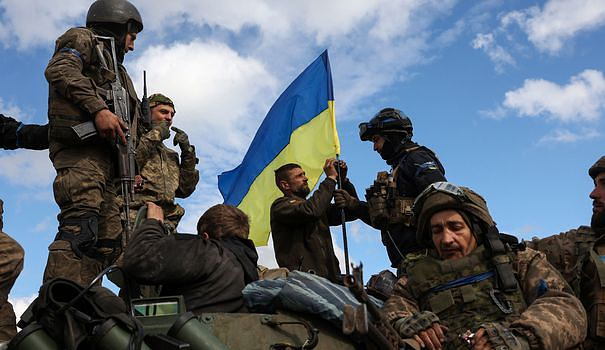 On Wednesday, the Ukrainian governor of the Lugansk region (east), hitherto under almost total control of Moscow, claimed a breakthrough.

"Now it's official. The de-occupation of the Lugansk region has begun. Several localities have already been liberated from the Russian army," said Sergiï Gaïdaï in a video posted on Telegram, without further details.

On Tuesday, Ukraine had already claimed a breakthrough in the north of the southern region of Kherson, while almost all of the Kharkiv region (northeast) now appears under Ukrainian control, paving the way towards that of Lugansk, stronghold of the separatists installed by Moscow since 2014.

After a month of military setbacks and the announcement of the mobilization of hundreds of thousands of Russian reservists, Vladimir Putin for his part signed on Wednesday the law enacting the annexation within the Russian Federation, formally decided on Friday, of the four regions from Donetsk, Lugansk, Kherson and Zaporizhia.

His spokesman, Dmitry Peskov assured that these territories would remain Russian "forever", and that Moscow would regain the ground lost at a frantic pace for a month.

These territories “will be taken back”, he assured during his daily briefing.

Mr. Putin had previously sworn to do everything to defend the annexed areas, even if it meant using nuclear weapons, a threat that did not stop either the Ukrainian counter-offensive or Western arms deliveries.

The Russian army had half-acknowledged retreats on Tuesday, publishing maps of the territories it controls. These show that Moscow ceded a whole part of the northern Kherson region and that it had left almost all of the eastern bank of the Oskil river, the last area of ​​the Kharkiv region that it still controlled.

An official of the occupation authorities, however, assured that the Russian withdrawal in the south was tactical and temporary.

"The regrouping on the front in the current conditions makes it possible to gather the forces and to strike a blow" to the Ukrainian troops, affirmed this person in charge, Kirill Stremoussov, with the Russian agency Ria Novosti.

The day before, Ukrainian President Volodymyr Zelensky had hailed "powerful" advances, saying that "dozens of localities have been liberated just this week" in the four regions which Moscow claims annexation.

In the east, the retreat from Kharkiv enabled the Ukrainian forces to take the fight further east, towards the Lugansk region, for example towards the town of Svatové.

If the Russian authorities have said the minimum about these setbacks, the war correspondents of pro-power Russian media insist on their magnitude. Many pro-Kremlin commentators have also criticized the Russian military.

"It is so. There will be no good news in the near future. Neither from the side of the Kherson front, nor now from that of Lugansk", commented from Svatové on Tuesday on his Telegram channel, Alexandre Kots, from Komsomolskaya Pravda newspaper.

Near Lyman, a strategic railway junction taken over in the Donetsk region (east) last weekend, a Ukrainian paratrooper met on Tuesday by AFP admitted that he and his comrades were "very exhausted", but determined to continue.

"We rest a little and we will go further", said a young bearded soldier, "we will hunt them".

Oleksandre, 31, a para from the same unit, said the fighting had been "very hard" but they had to "move forward".

He assured not to fear the arrival of Russian reinforcements following the mobilization of hundreds of thousands of Russian reservists decreed by Vladimir Putin on September 21 to try to stem the spiral of defeats.

"Their mobilization... No matter how many there are, they don't really want to fight us," said the young soldier.

This mobilization proved chaotic, the army having shocked by summoning unfit people, while crowds of Russians preferred to flee the country.

On the diplomatic front, US President Joe Biden announced on Tuesday a new US shipment of military equipment, worth $625 million, including four new Himars rocket launcher systems, powerful and much appreciated by Ukrainians.

For their part, the Member States of the European Union agreed on Wednesday on a new series of sanctions against Russian entities and personalities.

Russia on Wednesday asked to participate in the investigation into the leaks from the Nord Stream gas pipelines, Sweden, in charge of the investigations, having blocked access to the area of ​​​​this alleged sabotage located in the Baltic Sea.

Moscow implied that the United States could sabotage these key pipes for the energy supply of Europe, when the Westerners suspect Russia.