The music was more than adequately covered, and the Ubeda Festival waited for more main courses. 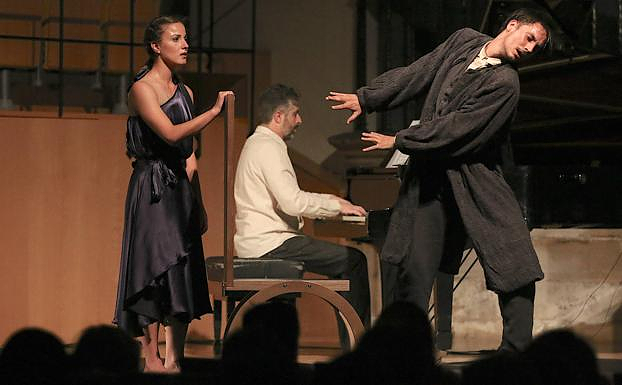 The music was more than adequately covered, and the Ubeda Festival waited for more main courses. In its fifth week of celebrations, the Ubeda Festival switched to dance. With a single proposal, it covered the entire file. On Saturday night, Santiago Hospital's auditorium was subject to the devastation of Marcat Dance's 'Wooden Bones’. Marcat Dance is the artistic home of Mario Bermudez Gil from Jaen de Vilches, who co-founded the company with American Catherine Coury.

One month after receiving the award at the 8th Lorca Awards presented by the Andalusian Academy of Performing Arts for the best dance show, the proposal arrived in Ubeda. Gala in which Mario Bermudez Gil was awarded the award for best male contemporary choreographer, as well as for his performance in 'Huesos de Madera.

He was accompanied on stage by Marilisa Galicchio, a dancer, and Javier Negrin as he narrated through music and dance the story of his uncle and mother, the choreographer. The first became paraplegic, and the second took care of him. It is also the story of many others who have a disability, as well as their caregivers and environment.

How can you bring movement to a situation that is marked by its lack? Marcat Dance faces this challenge for the first and only time. It moves away from suggestions, evocations, to confront a concrete, close reality. Marcat Dance does this to draw attention the silent acts of generosity and sacrifice by the caretaker. It implies, it assumes, but it is difficult to see because the tragedy of those who are ill-fated has more impact and visibility. It is also intended to be a sincere tribute to all those who are disabled and face daily challenges, both mental and physical.

Isabel Vazquez is the veteran choreographer and dancer Isabel Vazquez. She was also Mario Bermudez’s teacher at one time. To the two dancers, there are two additional protagonists: the wooden chair, which transcends its status as props to become an integral part of the narrative; the pianist, who is always immobile, interprets live well-known works from the universal repertoire by authors like Bach, Handel and Rachmaninov, with strong emotional charges.

The public stood up and applauded the emotion that permeated every detail, including the shadows, of the scene. So much emotion was concentrated in each gesture, in each look. So much truth was put at the service beauty. So much risk was taken in a crude, naked montage.

‹ ›
Keywords:
FestivalUbedaRindioDesgarradoraSensibilidadHuesosMadera
Your comment has been forwarded to the administrator for approval.×
Warning! Will constitute a criminal offense, illegal, threatening, offensive, insulting and swearing, derogatory, defamatory, vulgar, pornographic, indecent, personality rights, damaging or similar nature in the nature of all kinds of financial content, legal, criminal and administrative responsibility for the content of the sender member / members are belong.
Related News