The tsarina set about conquering the Ukraine with great enthusiasm

Vladimir Putin takes the same view as Tsar Peter I and Tsarina Catherine II: the conqueror visits the annexed country to demonstrate his power. 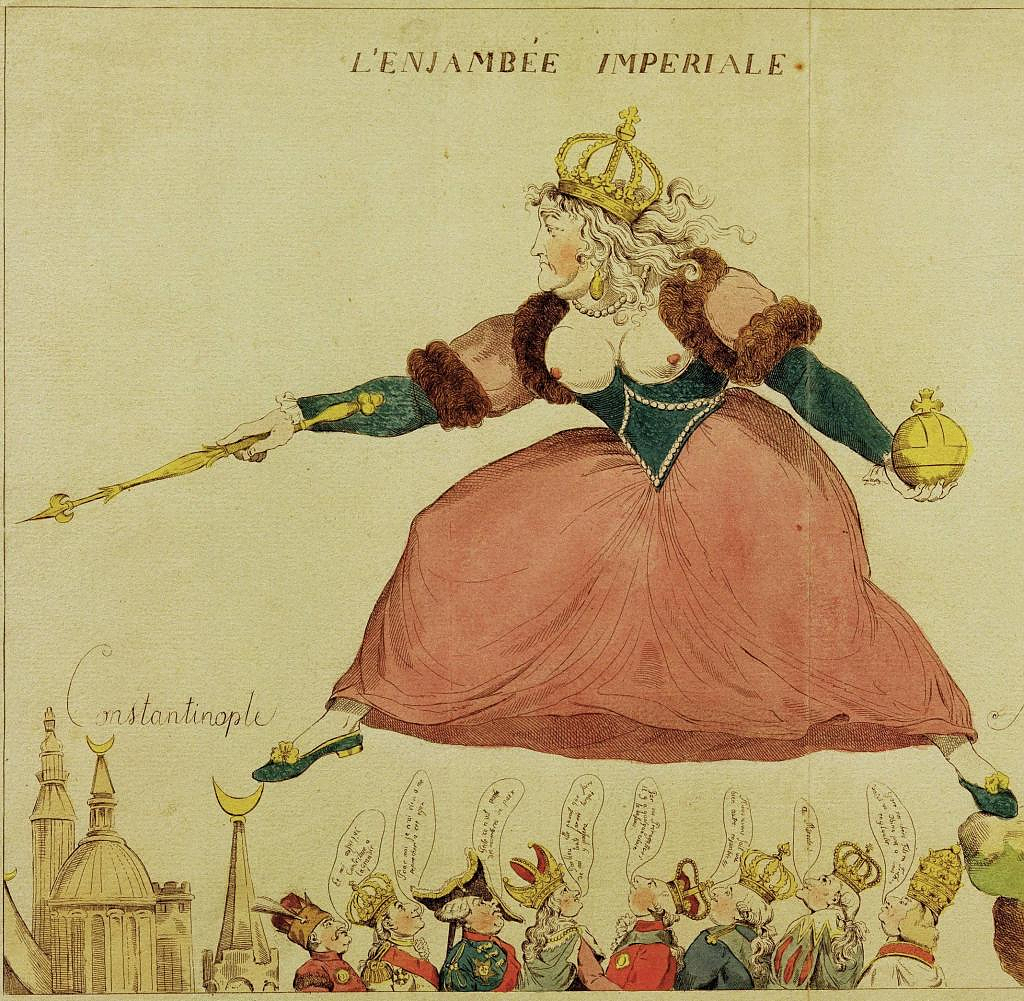 Vladimir Putin takes the same view as Tsar Peter I and Tsarina Catherine II: the conqueror visits the annexed country to demonstrate his power. And to announce a little later that the war was not over because other territories still had to be "liberated".

Putin likes to be like a tsar: self-important, authoritarian, autocratic. And he doesn't shy away from emulating his predecessors from imperial times if that promises gains in popularity. So a few weeks after the annexation of Crimea in 2014, he flew to Sevastopol to inspect a naval parade and present himself as the new ruler of the peninsula. After all, after his troops had conquered the cities of Azov and Taganrog in 1695/96, giving Russia temporary access to the Black Sea, Tsar Peter the Great celebrated this with his visit to Tanganrog in September 1698.

And so did Catherine the Great after the occupation of the Crimean Tatar Khanate in 1783. At that time (as now), the European powers seemed to be surprised and taken by surprise, because the tsarina had not been expected to take such action against the protectorate of the Ottoman Empire. The diplomats at the St. Petersburg court remained unaware that Catherine's advisors had been preparing this coup since 1781. At that time her temporary lover Prince Grigory Potemkin (Potjomkin) wrote to the Tsarina:

"The Crimea, because of its location, divides our borders... Imagine that Crimea is yours and that wart on your nose is removed, then the situation at the borders suddenly becomes wonderful." So it was in February 1883 the order to conquer the peninsula. But even then there was a gap between desire and reality.

“I had expected Crimea to be occupied by mid-May at the latest. It's already mid-July," the tsarina complained shortly before the completion was announced on July 27, 1783. On the same day, she immediately announced that the country was henceforth part of the Russian Empire. And self-important, negating all objections, Potemkin let her know: "Once the cake is baked, everyone will feel hungry. I count on my allies just as little as I fear the thunder and sheet lightning of the French."

A good three years later, after the traces of the war were no longer too obvious, farmers had settled and villages had been laid out (by no means only as Potemkin villages), the tsarina decided to travel to the Crimea.

On January 18, 1787, the imperial caravan – 14 wagons, 124 sledges, 40 luggage wagons – set off at minus 17 degrees. Because in winter the sleds promised better progress, the miserable roads were frozen and snowy. And since it was only light for a few hours a day, pyres made of fir, cypress, birch and spruce wood were lit along the way.

How to get to Kyiv on February 9th. However, the onward journey by ship to Cherson took until late April because of the late melting of the ice on the Dnieper. The departure was accompanied by something grotesque, as Weikard, Catherine's personal physician, reports. Many people had gathered on the hill. Among them were three old generals who wanted to encourage the crowd to shout "Hurrah". “The people were silent and let the three old men groan a pitiful trio on their own. Soldiers were quickly summoned, who finally had to shout out the hurrah, which echoed right up to the ships.”

The Habsburg Emperor Joseph II, who had been taking part in the trip since May, remarked at the time: "The empress is dying to start a war with the Turks." Crimea was not enough for her. Ochakov (today Ochakiv), the strategically important Ottoman fortress at the confluence of the Dnieper and the Bug, was now the "wart on her nose".

The opportunity was not long in coming. The government of Sultan Abdülhamid I saw the trip as a provocation and in August declared war on Russia and his ally Austria. However, the Tsarist Empire was not prepared for this subsequent war, because Potemkin had ordered the army to undergo a reform that was far from over. And the Austrians, too, found themselves unable, as agreed, to take action against Belgrade, which was once again Ottoman at the time.

That is why Potemkin even considered abandoning Crimea. But Katharina rebuked him: "I can't go into that. War is being waged because of Crimea... How are we to renounce such great advantages gained in war and peace?" And she added: "Here, not words but deeds are necessary for the honor, glory and benefit of the ruler and the To preserve her status.” Even if she liked to present herself as “enlightened”, she was obviously more concerned with her reputation as a monarch than with the well-being of the country and her country’s children.

When fighting resumed in the spring of 1788 - a "winter break" was then common in almost all campaigns - the Turks seemed to have the advantage, for Russia was weakened by the Swedes' threats to Kronstadt and St. Petersburg at the same time. France, unaffected by these conflicts, therefore offered to mediate. But Katharina was outraged by these suggestions: "They dared to suggest that my minister return Crimea."

So the siege of Ochakov continued for months. The reason, as an Austrian observer in Potemkin's army noted indignantly, was: "A mad dash of humanity that is sincere but misplaced. It allows him (Potemkin) to spare human lives whose sacrifice is important to the success of this enterprise.”

The fortress could only be taken in December, after the Russian fleet had defeated the numerically far superior Turks at sea. Katharina proudly put it: “The Te Deum was sung under the noise of 101 cannons in my presence at a temperature of 25 to 28 degrees. Public joy is great.” Only Potemkin remained skeptical: “The greater the successes will be, the more moderate our politics must be.” But he also added: “Sincerity in politics is not necessary.”

In the Peace of Jassy in 1792, the Ottoman Empire not only had to give up the khanate of the Crimean Tatars for good, but also large parts of the Ukraine. They became "Novorussia".