Oliver Schaffer quickly goes over a few surfaces with a feather duster, then his complete work of art is ready for the public. 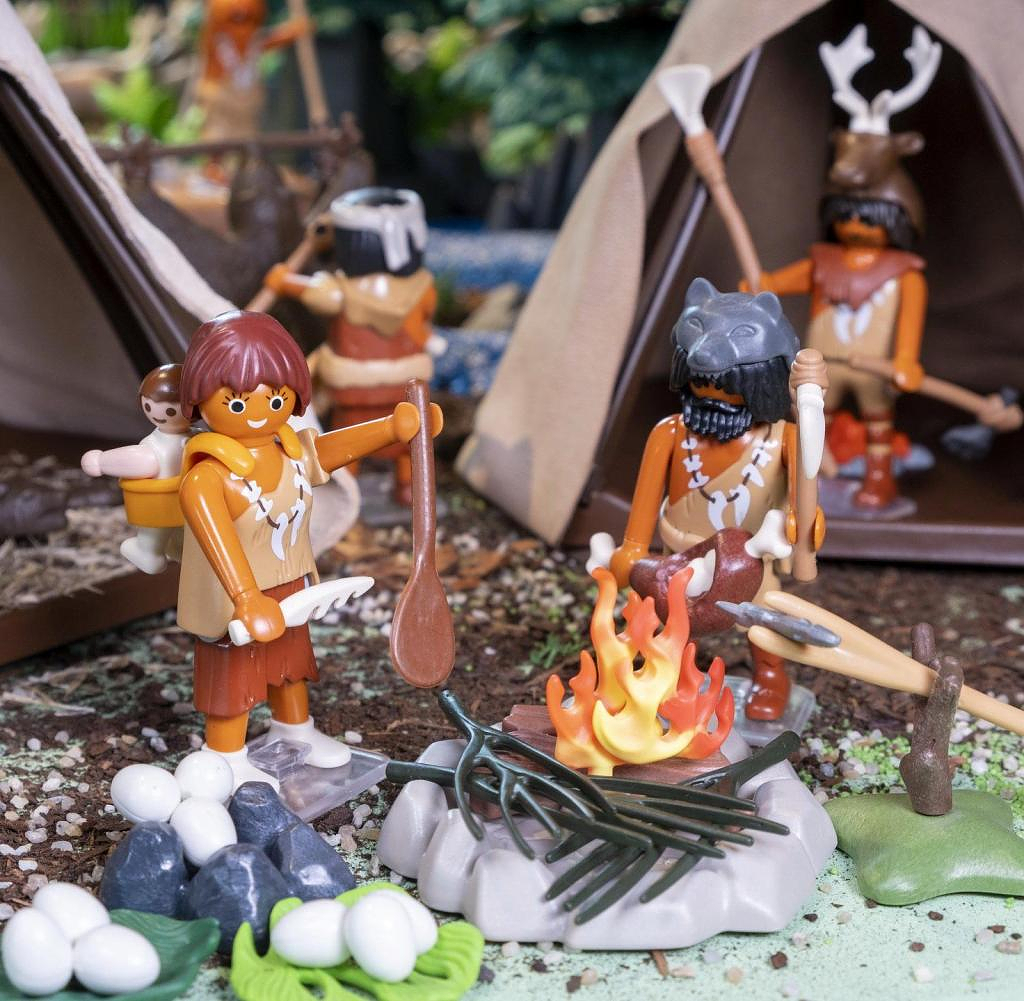 Oliver Schaffer quickly goes over a few surfaces with a feather duster, then his complete work of art is ready for the public. In the last two weeks, the Playmobil collector, scenographer and exhibition organizer in the Archaeological Museum has put together the show "Playmobil - Archaeological Time Travel" from 50,000 individual parts. "It's a bit like painting a picture," says the owner of Germany's largest Playmobil collection.

Nothing is left to chance when designing the dioramas. “For example, each animal stands at a certain angle to the herd. It's always about the harmonious whole," explains Schaffer, pointing to a long procession of reindeer wandering through a landscape shaped by watercourses. The scene takes place around 15,000 years ago in the Ahrensburg Tunnel Valley, where Stone Age reindeer hunters pursued their prey.

"We explain the whole world of archeology in 14 dioramas," says Museum Director Rainer-Maria Weiss. From the dinosaurs to the Old and New Stone Age to the Viking Age. Greek antiquity comes alive, as does ancient Egypt or the Khmer temple of Angkor Wat in Cambodia.

The museum director's favorite diorama is obviously the Hammaburg, which Schaffer has just built for the first time: Inside the palisade-topped rampart, life and activity of the 9th century unfolds, ships are loaded and unloaded in the harbor, wagons pass through the two archaeologically proven castle gates , fat sheep graze on the banks of the Elbe.

Another famous palisade round is similarly idyllic: as a digression into fiction, the artist also designed the Gallic village of Asterix, which does not stop resisting the Roman invaders, who are already advancing with a large fleet in the neighboring diorama.

Incidentally, Asterix and Obelix are among the youngest Playmobil figures whose story the show briefly tells. Playmobil was invented by Hans Beck, the then chief developer of the toy company geobra Brandstätter in Zirndorf, Franconia. The first figures came onto the market in 1974 and represented construction workers, knights and Native Americans. You can see exemplary Playmo representatives from almost 50 years, including ghosts and Easter bunnies, mermaids and aliens, as well as a clown with legs on stilts.

Speaking of clowns: A Playmobil circus, which grew in size in his children's room in Kiel, was the beginning of Schaffer's passion for collecting. Years later, while the collector was now working as a musical actor, a call came from Zirndorf asking if he would like to exhibit his "Zirkus Oliver" for Playmobil's 30th birthday.

Since then, the collection, which now includes more than 300,000 figures and one million individual parts, has been on tour. Schaffer describes himself as a "purpose collector", meaning he only buys what he can use for his dioramas. The exhibition organizer emphasizes that his home in Hamburg-Neugraben is a “playmo-free zone”.

Above all, he appreciates the versatility of Playmobil - a pirate ship can be quickly remodeled into a Hanseatic cog if necessary, while the figures can be almost anything. "The focus is on the story I want to tell," says the artist, who works in close coordination with the museum team at the Archaeological Museum.

Now every Playmo fan can discover how the Stone Age people switched to agriculture and animal husbandry, how Roman warships once advanced to the Elbe, or how the Egyptians embalmed their pharaohs. An excavation is also described in detail. The fact that the archaeologists are also digging up a Playmobil circus set is one of the mini mistakes made especially for children - just like the homo sapiens in Dino-Land or the ghetto blaster in Hammaburg.

‹ ›
Keywords:
HamburgMuseenPlaymobilArchäologieKulturOliver SchafferElbeWallringElbuferGeschichteMusikZirndorfÄgyptenDioramen
Your comment has been forwarded to the administrator for approval.×
Warning! Will constitute a criminal offense, illegal, threatening, offensive, insulting and swearing, derogatory, defamatory, vulgar, pornographic, indecent, personality rights, damaging or similar nature in the nature of all kinds of financial content, legal, criminal and administrative responsibility for the content of the sender member / members are belong.
Related News